Surely the markets are happy to be done with 2015.

On Thursday we wrapped up the last minutes of trading for the year with a little sell-off. What a gift, Santa remembered the bears! 2015 was very unkind to quite a few Hedge Funds and investors who chose to seek yield in risky asset classes. At the same time, turning the page on the calendar does not change the general environment we’re in.

The US Economy and The Markets

Right now there are two major themes of commentary about the US economy and the markets. The first camp says that unemployment is low, the labor market is okay, and it’s time to raise rates because the markets can take it. Note that the Fed sitting around thinking about the markets at all should evoke a sense of horror in you, but that’s a conversation for another time. The second camp effectively says the first camp is lying and everything is awful. Who’s right? Time will tell.

Despite being relatively bearish by nature, I try to find reasons for optimism. The US is a great country and it’s full of creative, resourceful people. Those who are able to recognize shifts in themes and trends should be just fine. Those who don’t are going to have a rougher path. I spend a lot of time thinking about the labor market as it relates to people I know. The period where people could go to school for a degree and then get a nice middle class job are over. I very reluctantly work as a Tax CPA and I can assure you that the clients with money are not punching the clock at a cozy, middle class “nine to five.”

A couple of interesting labor market themes are playing out. In the late 90’s and early 2000’s we began to see this trend of outsourcing. That trend continues today where simple work is being moved offshore. From an Economics standpoint, outsourcing is rational and makes sense. Those who can produce an identical good or service more cheaply have a competitive advantage and should produce it. What we’re seeing now is a continuation and acceleration of outsourcing and people are responding in one of three ways:

The reason we care about the labor market is that it’s deeply related to consumption and consumption keeps the country afloat.  We’re addicted to debt in the US and that debt has been artificially inflating our consumption for quite some time. As a result, we don’t even know what we’re really capable of consuming. We just borrow, borrow more, and defer payment as long as possible.  The problem is that debt needs to be repaid at some point and that requires income. If the labor market participants struggle to create income, the potential for major problems exists. The alternative to repayment is default. 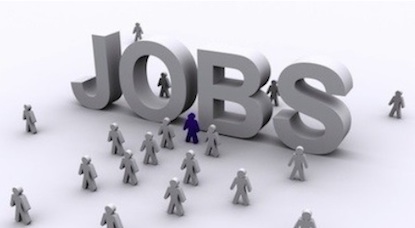 How This All Relates To The Financial Markets

Debt is the quiet (maybe even silent) bubble right now for both the US and individuals. When you’re in a bubble market nobody likes to believe there’s a bubble. The participants want to believe the music will go on and on, but eventually the music stops. When the music stops, there are usually fewer chairs than anyone ever expected.  For the time being, the market has shrugged off a lot of the structural problems that exist. Easy money has allowed the market to move higher for several years and the real question is what happens now.

As we move into 2016, it’s important to keep in mind that the market doesn’t have a clearly defined direction at the moment. The market is trapped in an area of balance and that means price is moving around about a mean. Price tends to revert to the mean over time and, at the same time, the mean changes. Right now we see a sideways market trapped below recent high levels. Sure, sitting below recent highs is a little Bearish, but the market really has not shown us where it wants to go yet.

While I’m tooting the bear horn, it’s good to recognize the possibility that price does have the potential to move higher. As I’ve indicated in the charts below, RUT is trapped between 1100 and 1200.