If you acted on the bullish forecast we posted last May for the U.S. Dollar ETF, then you were happy to see price approach the first of our overhead targets near the end of 2016.

If you’re still in that long-term trade, or if you’re scouting for shorter-term trades, then you might also be pleased by the prospect that the U.S. Dollar can reach still higher.

We’re actually working with two different scenarios for the Power Shares DB U.S. Dollar Bullish ETF (NYSEARCA:UUP). Both scenarios call for the Dollar to advance during the remainder of 2017, but the upward paths would be different for each.

Treating the May 2016 low as the end of large wave (iv) in a five-wave upward sequence, we now consider the most likely ways for price to trace out wave (v) of that sequence.

For subscribers at Trading On The Mark, this Dollar-bullish framework and these specific scenarios have been informing trades in currencies, precious metals, and related ETFs for quite some time. Start your own subscription and get a full month of access to all the services we offer, including our Daily Analysis and our Intraday Analysis for just the cost of the Daily Analysis alone.

If UUP is tracing the most straightforward type of advance, then the consolidation seen during the early months of 2017 probably represents a fourth wave in a five-wave impulsive sequence up from the 2016 low. If that is the case, then the corrective pattern could continue for several more weeks before eventually breaking above the resistance zone that extends from 26.38 to 26.55. A break above that zone would be an initial signal that sub-wave ‘v’ of (v) has begun. Additional confirmation would come with a weekly close above the next higher resistance at 26.68.

The first resistance is probably the most important, representing the typical extent of internal retracement when price is forming a narrowing Elliott wave triangle pattern. If that pattern manifests, then price should consolidate beneath that area as it works its way through all five swings of the triangle. Then it should break upward.

If the expected correction takes a form other than a triangle during the next few weeks, then the resistance at 26.68 represents another area where a minor downward move could begin – all still within the wave ‘iv’ correction.

Note, price is already on the verge of testing the lower boundary of the potential triangle. If it finds support during the next few days, that will boost the odds of the triangle scenario working. 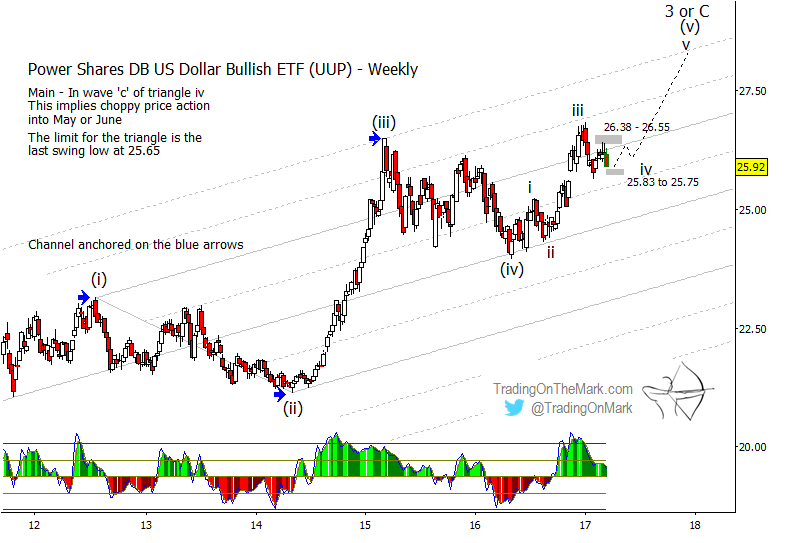 The next most likely way for the Dollar to advance in 2017 would be as an ending diagonal wave (v). In that view, the high at the end of 2016 probably represents the first sub-wave of the diagonal.

Initial confirmation of this scenario would come with price breaking beneath the February 2017 low. From there, it might continue downward to test the Fibonacci-based retracement target zone of 25.07 to 25.24, and/or the supportive center line of the channel we have drawn on the chart.

If price manages to find support in that region, then traders should watch a bounce to reach a new high, perhaps in summer or autumn. Later, there should be yet another bounce later to complete the diagonal. 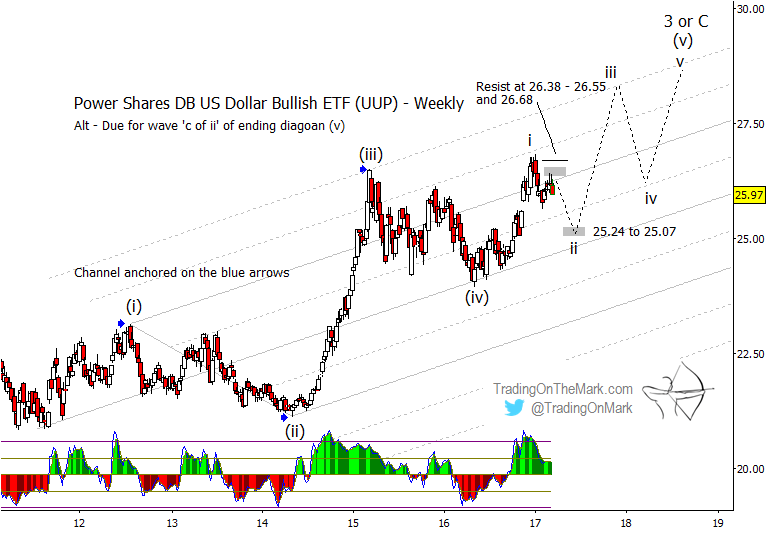 The take-home message of both scenarios is that the Dollar Index and UUP could decline somewhat in the near term, even though the longer-term prospect is bullish. Although a short trade from the present area is not impossible, there is support nearby and the remainder of the decline might not pay much. The better opportunities may be to wait for UUP either to make a breakout above resistance or to make a higher low in the 25.07-25.24 area.