Investors have gone from fearful of a recession to fearful of missing out (FOMO) on this rally.

Yet the economic Modern Family sectors suggest that a FOMO environment may not be rational.

Trump’s remarks to the Economic Club of New York earlier today criticized the Federal Reserve for not going closer to zero interest rates and then at the same time touted the strong economy of the United States.

Furthermore, comments on the trade deal with China engendered a response from the China Global Times that Trump “lied.”

That sent the Dow Jones Industrial Average INDEXDJX: .DJI into red territory and took the wind out of the rally sails of the other 3 indices.

Yet even long before Trump’s remarks, the Russell 2000 Index INDEXRUSSELL: RUT has failed to clear last week’s high or break last week’s low.

Despite the S&P 500’s (SPY) journey to another new all-time high, the Russell 2000’s (IWM) inside week makes it the index to watch.

Sure, our sculpture looks all smug and happy, but notice how his hand touches his heart and his eyes are closed.

As far as recession fears, the possibility remains on the table.

Rather than think like an economist though, all one needs to do is watch the key index (IWM) and sectors, Transportation IYT, plus Retail XRT, Regional Banks KRE, Biotechnology IBB, and Semiconductors SMH.

A move under 157.81 that cannot recover, means more selling is in store for the overall market.

As for the other sectors, they also traded within the range of last week.

Based on what I see in the charts, I still go with the probablity of stagflation over recession.

Looking at commodities, gold and gold miners rallied off of support.

DBA, the agricultural ETF and one I have featured many times, cleared the 200-daily moving average.

One reason we are not seeing commodities at even higher prices has to do with the strong U.S. dollar and the rise in yields these last few weeks.

However, if I may be so bold, the dollar looks like it could be topping.

The Fed has already suggested that it would consider lowering rates again should the trade war take more of a toll on the economy (The Modern Family.)

Put that all together and you have a few instruments to watch carefully.

If the stock market does indeed roll over, our smug and chubby figure will clutch his heart and open his eyes. 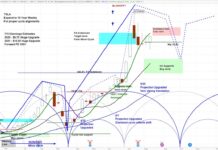