What, Me Worry?  As we contemplate the upcoming U.S. presidential election one of 720Global’s chief investment related concerns is the potential for the election results to roil financial markets.

Strangely, the major U.S. stock market indices (i.e. S&P 500 Index – INDEXSP:.INX) trade as if the presidential election results, be it a Clinton or Trump victory, are inconsequential for stock market prices. That stance is greatly at odds with what many of us are thinking. Further, it’s easy to read (and feel) the palpable anxiety voiced by many traditional and social media outlets.

In prior articles, including our most recent “Mm Mm Good: The Hunt For Yield”, we discussed economic and market distortions caused by extraordinary central bank monetary policy. In this instance we focus on a behavioral distortion. And, in our opinion, this is also partially a result of central bank policy, actions and words.

The BREXIT vote in the United Kingdom was feared to have negative consequences for the financial markets if U.K. voters favored exiting the European Union (EU). As we now know, the “leave” votes won despite the vast majority of polls predicting a “stay” victory. Immediately following the surprising result, stock markets began plummeting. This was the “expected” behavior. Within days, however, markets snapped back. And after only a couple of weeks, many had not only fully recovered but some had actually risen above pre-vote levels.

This abnormal behavior is something that has become common place in the last few years. The market has coined this type of market reaction “bad news is good news”. From both a logical and a fundamental view it is senseless, unless one considers why the market thinks bad news is good news.

In 1998 Alan Greenspan and the Federal Reserve helped bail out Wall Street and the failing hedge fund Long Term Capital Management. From that day forward, central bankers around the world have pursued an increasingly proactive approach towards steering economic growth and, more recently, financial asset prices.

In July 2012, Mario Draghi, President of the European Central Bank (ECB), vowed to do “whatever it takes”. This was his attempt to calm financial market fears that were hammering the Euro region. Shortly after uttering those famous words, European stock markets and most others around the world rallied significantly. On October 14, 2014, Fed Governor James Bullard suggested the Fed pause the tapering of Quantitative Easing (QE) in response to a 10% stock market decline and an affiliated drop in bond yields. Within two weeks of his comments, the stock market had more than erased its losses. And soon thereafter, stocks were back to setting new all-time highs.

Bullard’s so called “stick save”, Draghi’s promise to do anything, and many other similar statements and actions from central bankers have not only reassured investors but they have bred a high level of investor complacency. On a daily basis, it is commonplace to witness market indifference or even strength on weak economic data. Most recently, on July 28, 2016, investors received a much weaker than expected GDP release. This should have caused concern for investors. Instead, the weak GDP data resulted in equity market gains.

Investors are electing to ignore fundamental news and data, which ultimately underpin equity valuations. I believe they are doing so on the presumption that the Fed and other central banks will “do whatever it takes” to prevent markets from correcting.

The graph below shows implied equity volatility from prior election year periods as of the end of each respective July leading to the election, as well as at the end of July 2016.

Note that current annualized implied volatility of 11.87% is well below any other level seen since at least the Bill Clinton-Bob Dole presidential election of 1996. Additionally, when compared to the entire data set going back over twenty years, as shown below, the current VIX index (INDEXCBOE:VIX – red dotted line) is well below the average and 95% of all other observations. In other words the market is extremely confident there are no surprises looming and no cause for concern, election or not. 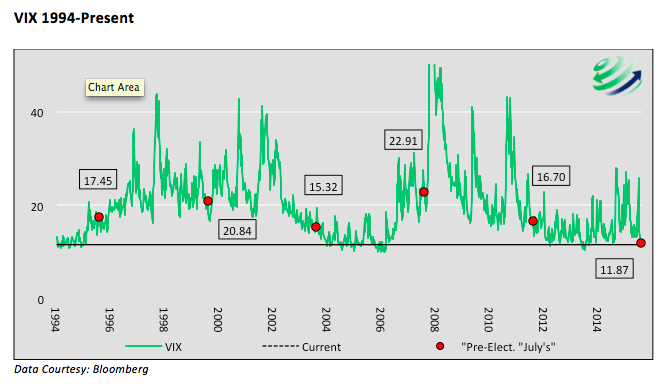 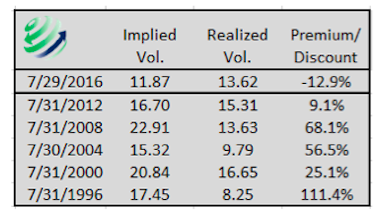 Can we assume the Fed will ensure the markets behave appropriately regardless of who wins the presidential election? Answering this question is difficult. Recent history sides with those answering yes. That said, there is a risk that the 2016 election results upset markets, and when needed, Fed statements and/or actions will not have their desired effect. When that risk is considered alongside already troubling factors such as stagnating economic growth, declining earnings, high valuations and numerous geopolitical risks, investors may be well-served to question many bullish market forecasts and the popular blind faith assumption in Fed effectiveness.

The market, courtesy of what we see as investor complacency, is offering very cheap insurance for an event that has the potential to induce extreme volatility via VIX options and futures. Even if the next eleven weeks leading to the presidential election prove to be uneventful, the VIX at current levels, as shown earlier, has been a prudent place to own protection.