Today’s commentary is written by Geoff Bysshe, President, MarketGauge. Geoff is filling in for Mish until August 20th.

While the common expression involves dogs, the analogy holds true for the market’s bulls and bears.

As you’ll soon learn, a simple ringing of a bell will send these two dogs in the caption into savage frenzy!

It was easy to anticipate that when the markets broke their compressed multi-day range that the reaction would be a significant move. However, it was not as easy to anticipate what the catalyst would be, or what time of day it would occur for the S&P 500 (NYSEARCA: SPY) and Nasdaq (NASDAQ: QQQ).

Both the source of the ‘awakening of the dogs’ and the timing of it will play a big role in the result. They will also impact the subsequent trends.

Keeping with the sleeping dog analogy…

Had the awakening been as straight forward as the dogs’ owner entering the room, or in the market’s case, a PPI report at 8:30 AM, the reaction could have been as orderly as and energetic move in one direction or the other.

However, the awakening was equivalent to incitement that ensues when my dogs are caught by surprise when the doorbell rings! The dogs go crazy. 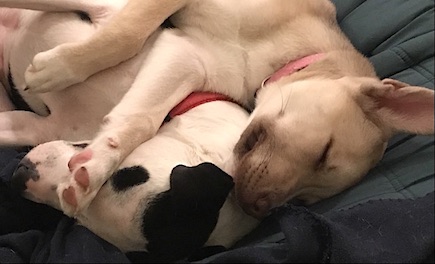 The dogs are the same as the collapse in the Turkish Lira Thursday night which roiled markets around the globe.  And, it was all incited by comments by President Trump and President Erdogan, both of whom were devoid of any concern for calming a market condition already on edge.

This catalyst fanned the fears of trade wars destabilizing stocks, pouring gas on the fire burning under the rising dollar, and fueling a flight to safety in U.S. bonds.

In fact if you had been watching the action of the bonds on Thursday relative to their Opening Range it was oddly clear that something was stirring. So much so that I ‘naively’ bought calls to hedge my stocks simply because I saw fear that I couldn’t explain.

In Wednesday’s commentary I suggested that inflation news may cause the breakout in either direction, and I suggested a potentially bullish resolution to an initial bearish move.

However, as I suggested above, the catalyst is sometimes as important as the reaction.

The reason the catalyst is just as important as the reaction is because it helps understand the subsequent unintended consequences that catch traders’ off guard.

Friday’s break down in stocks looked like a typical ‘risk off’ move, but it was fueled by market moves that may lead to additional challenges such as…

Additionally, the “risk off” sentiment affected most sectors including the Semiconductors (SMH). Because the SMH was in a weak up trend, its reversal is disheartening and could mark the beginning of a longer decline.

Rising bonds (declining interest rates) seems counter intuitive at this point in the economic cycle, but one clear explanation is a prevailing desire for yield over growth or risk.

In other words, the rush to buy bonds was most likely an asset allocation away from stocks.

There are a lot of cross currents in the market, but right now whenever there is a sharp move up in bonds coinciding with a down move in stocks, it’s probably safe to assume that what’s driving both trends is fear of risk. And that doesn’t bode well for stocks in the coming days or weeks.

There is, however, one very real last hope for stocks.

That is that the door bell (Turkey) that drove the dogs into a frenzy, the rush into bonds, and the sell-off in semiconductors, turns out to be the equivalent of the doorbell ringing on a T.V. show.

For those of you who don’t have dogs…

The dogs, bulls, and bears are thrown for a loop, quickly calm down, and perhaps the status quo can continue.

But now they’re awake. So stay tuned for what’s next!