“Inflation is as violent as a mugger, as frightening as an armed robber, and as deadly as a hit man.” – President Regan

I am delighted to announce that our firm is now, Alexander & Swartz, Capital Research. Our new name reflects the evolution and transformation of our business. It’s not the first time in history a company has decided to change their name. Remember, Backrub? They are now, Google. How about, Brad’s Drink? Pepsi. My personal favorite is, Computing Tabulating Recording Corporation. That is IBM.

For a primer, please click here to read Part I of “The Party Is Over”.

Today I will be sharing some charts that I think are very well worth your time to have a look at.

The insight from charts and what they can reveal has been extremely valuable to me and my clients over the years; but first, I’d like to preface this by telling you that if I spent my life listening to every person that told me, I couldn’t do “that”, or the “that’s impossible” guy and the “who do you think you are trying to do that” crowd, I wouldn’t be typing this right now!

It’s a fault of human nature to look at what everybody else does so you do not stand out; but the impact of conforming to thinking and doing like everybody else, only results in getting what everyone else gets. There is a long history of us running against the grain, doing what is supposed to be impossible because our gut/spirit knows better.

The reason for mentioning this is after spending many years with a variety of Advisors, Fund Managers, Wholesalers, Ma’ and Paw’ Kettle, Joe CEO there is one very moot mantra being repeated that should not fall from anyone’s lips… “You can’t time the Market!”

Sounds painfully like the saying, “Well, you know what they say…”

Who is “they” anyway?

Let’s hold a mirror up to the “can’t time the market” mantra and reflect it back onto the purveyor who is living in the land of can’t and won’t.

The word “Cannot” is not in our repertoire. Saying you can’t, means you never will; but get one thing clear…

We can, and we will, keep on timing the market!

Here is the secret:  Investors do not have to know how to time the market if you just listen to what the market is telling you. The key is to interpret the language properly. The Capital markets love to speak the universal language of mathematics.

With that said, if you do not believe the square root of 9 is 3, that flowers have 3, 5, 8, 13, 21, or 34 petals on them (Fibonacci sequence), or that music vibrates at certain frequencies, then you probably won’t believe the chart below.

ANALYSIS OF THE DOW ($DJIA) 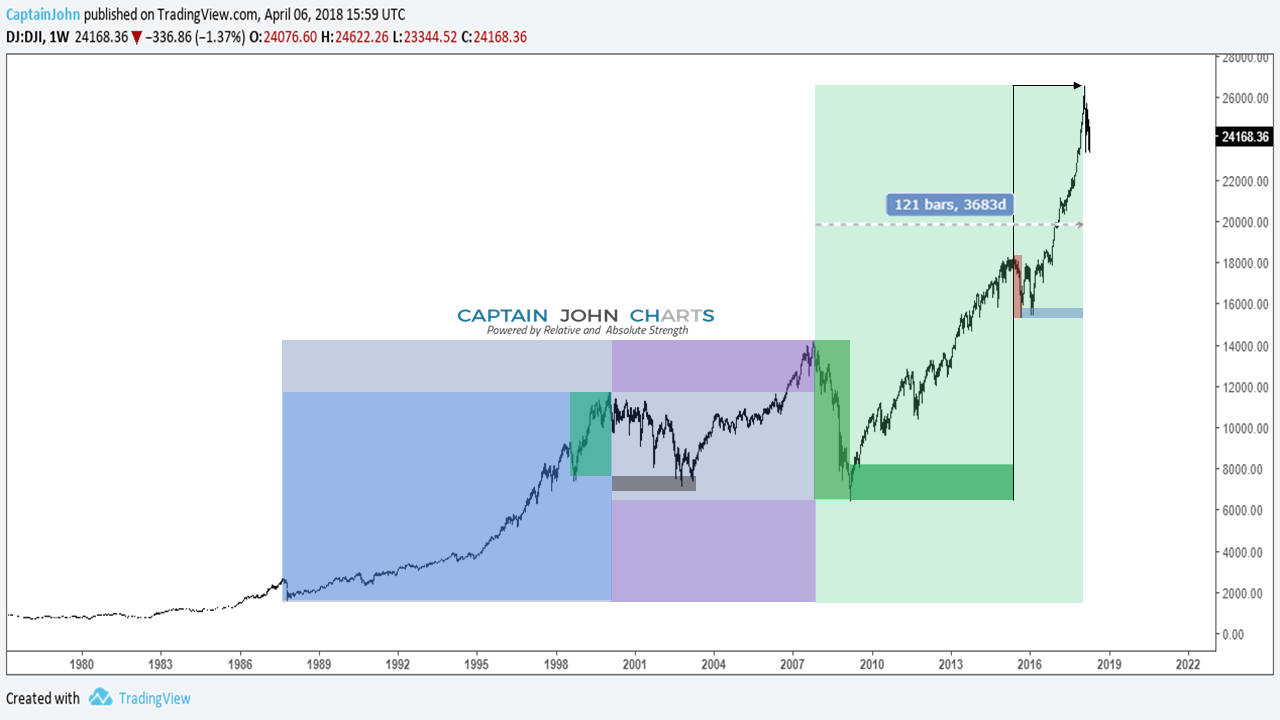 We can also see these relationships in various other major stock market indices.

The Dow Jones Industrial $DJI Monthly Chart (below)) shows the zeroing out of the market from the start of the crisis in 2007 at 100% Fibonacci extension and the move in 2009 down to 0%. 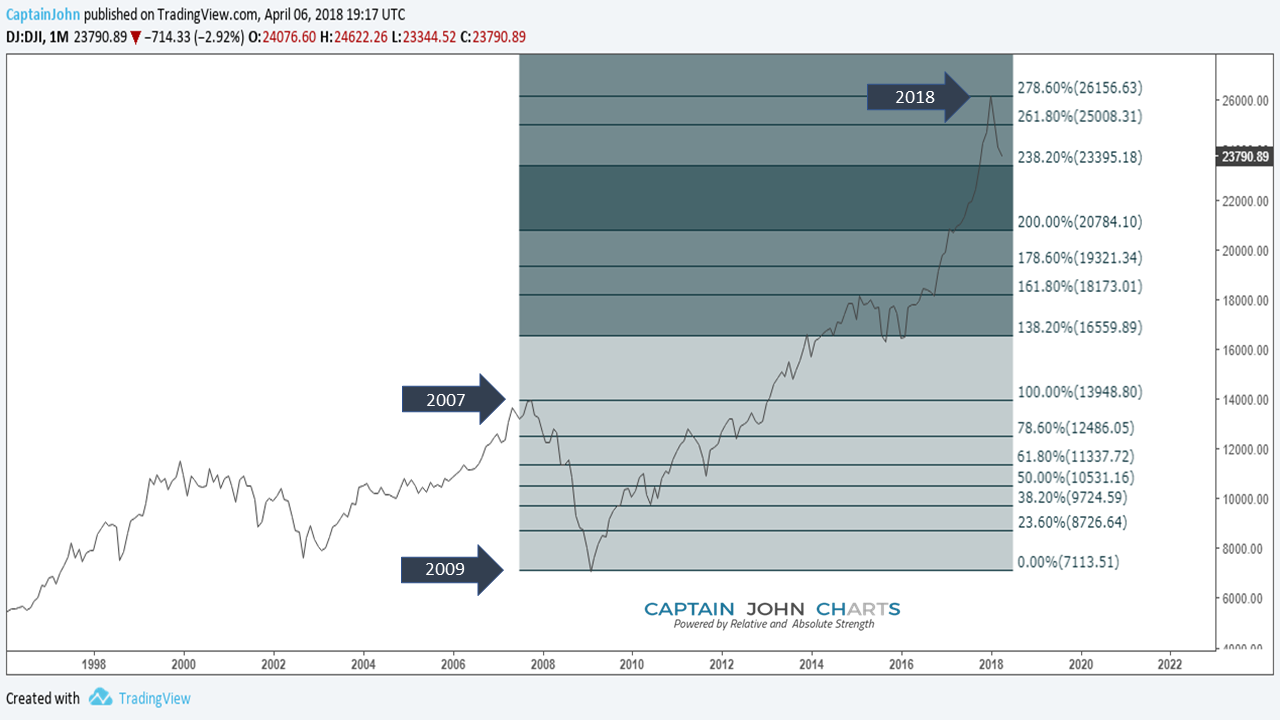 Retracement ratio 78.6% is a derived primary ratio calculated as a square root of the primary level 61.8% which is perfect harmony, and as such has mathematical justification.

Here’s the real significance; at these extension levels, you can be reasonably assured the top is in. The last run from 261.8% was sellers selling to those late comers whose timing is often mysteriously opposite and often extraordinarily late to the party.

Below is the Weekly chart of the 10 Year Treasury Note Interest Rate of the US Government Bond ($TNX). Notice how a massive head and shoulder bottom is in progress and the test of the neckline is already complete? 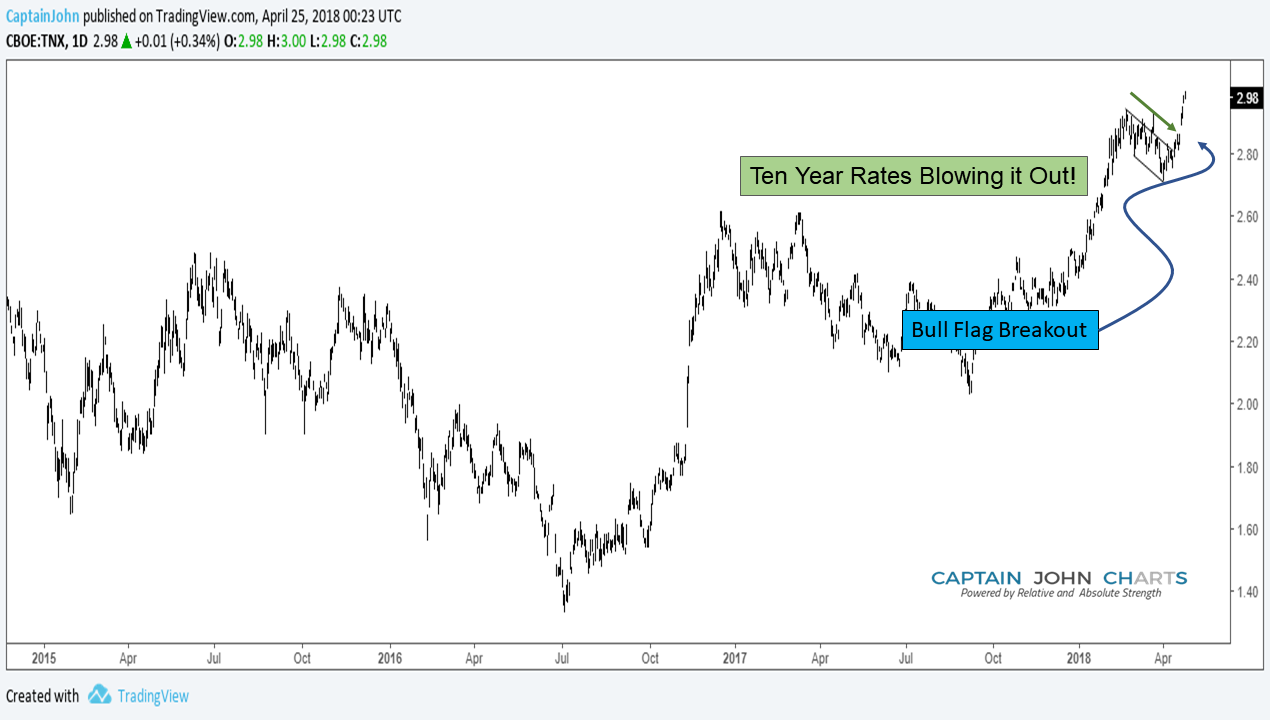 In the Monthly (long-term) chart below, Interest rates on the 10 year note already made a clearly defined double bottom and a break of the long-term downtrend while showing great relative strength. 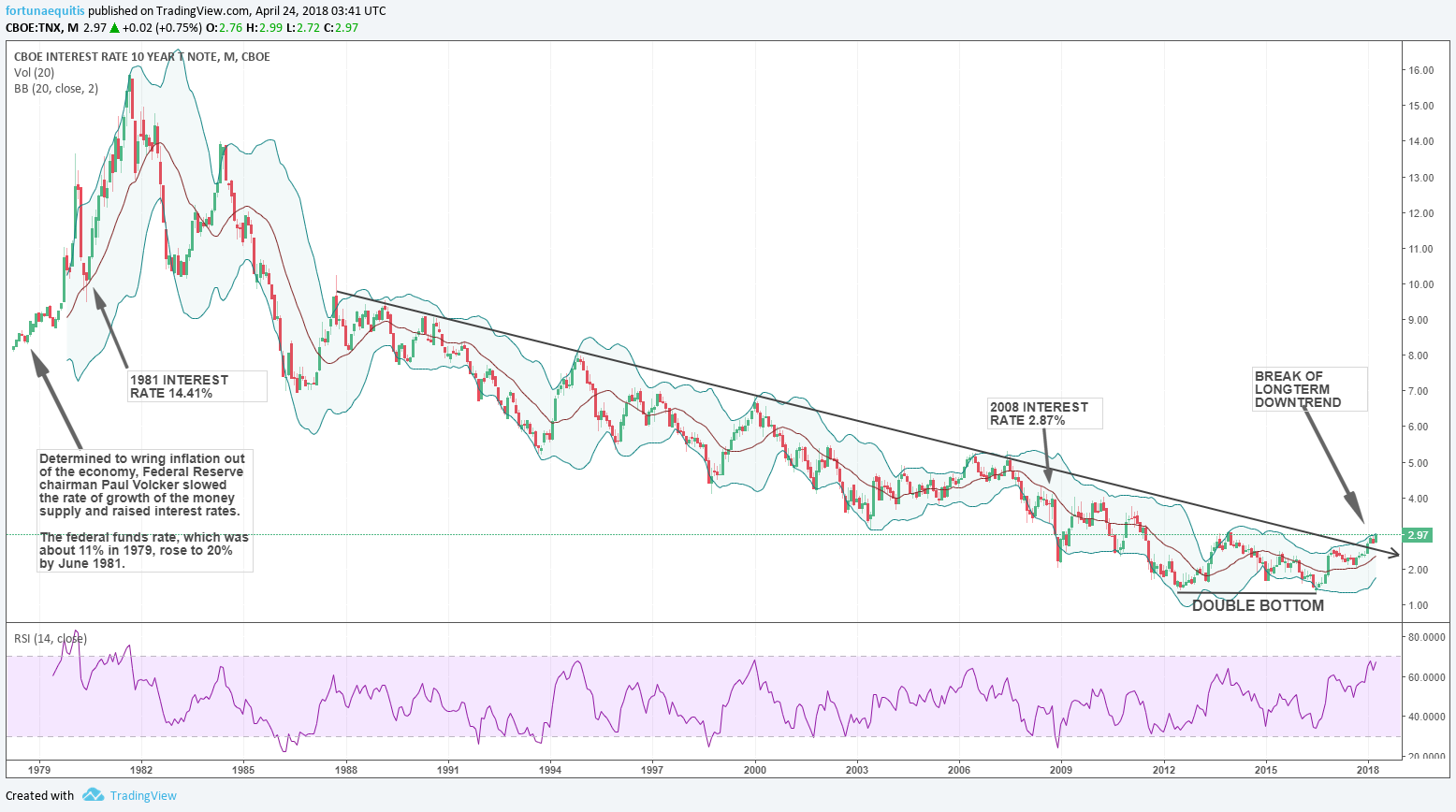 We think that interest rates should continue to gradually go up, further pressuring the stock market.

We have been bullish on rates and short the S&P 500 on a relative strength basis; or in a spread/pair trade.

Another troubling factor weighs heavy for the US REIT’s if the Twenty-Year Bonds continue to outperform. 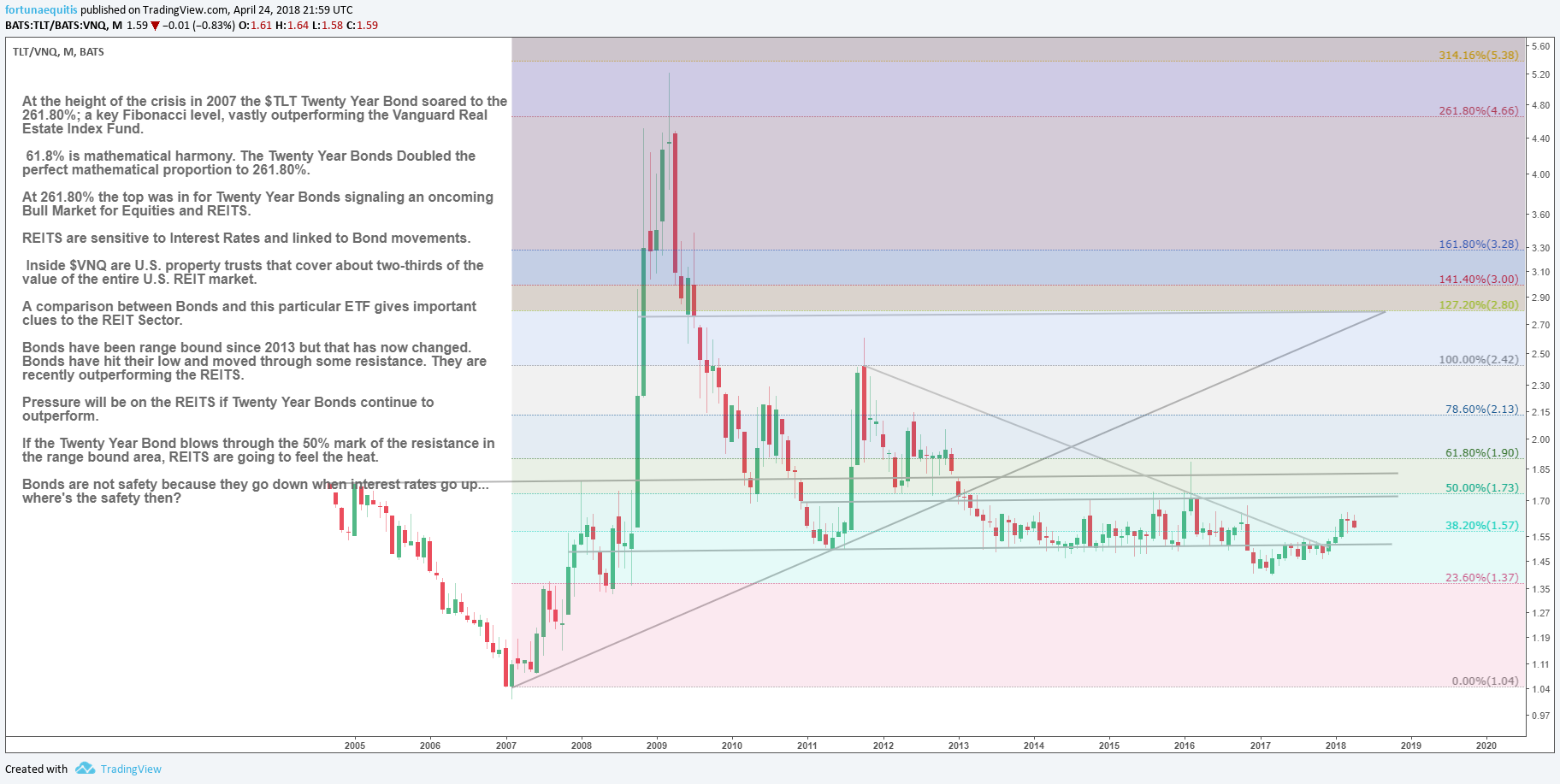 Bond’s are no longer considered a safety when interest rates go up (i.e. bond go down).  So, where’s the safety then?

Is it in the largest Nasdaq and Biotech companies ETF; known as $QQQ?

Notice now where the Head and Shoulders pattern formed in the longer-term chart?

I don’t believe there is any safety there either.

Please note that Captain John Charts is now Alexander and Swartz Capital Research. Our research is all about maximizing ones assets and growth; even in the worst of environments. 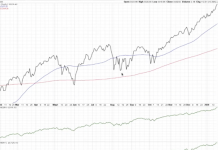 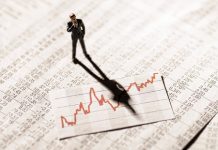