Key Takeaway: Reported jobs growth fell short of expectations in May, but monthly jobs report data are noisy. Slowing jobs growth and rising compensation may reflect labor supply issues rather than weaker labor demand. Broader measures of labor market health have cooled, and this could keep the Federal Reserve on sidelines in June.

The noise surrounding the release of the jobs report and employment data on the first Friday of every month has risen to an almost unbearable level. While the margin of error in the reported numbers and size of subsequent revisions is small in the context of the overall number of jobs in the economy, it can be relatively large compared to market expectations of monthly changes. Rather than obsess over upside and downside surprises in monthly changes, a better approach may be to put the overall trend in context.

The growth trend in non-farm payrolls has slowed over the past year. The year-over-year growth of 1.7% seen in May was the smallest such increase in the past two years. After nearly six years of continuous increases in employment, some slowing in the pace of growth is not surprising. Given that it comes amid evidence that wage growth is accelerating suggests this may be more a function of employers not being able to hire qualified workers than a lack of job openings. More evidence of these hiring dynamics will come in less heralded employment reports (notably the JOLTS) released later in the month. 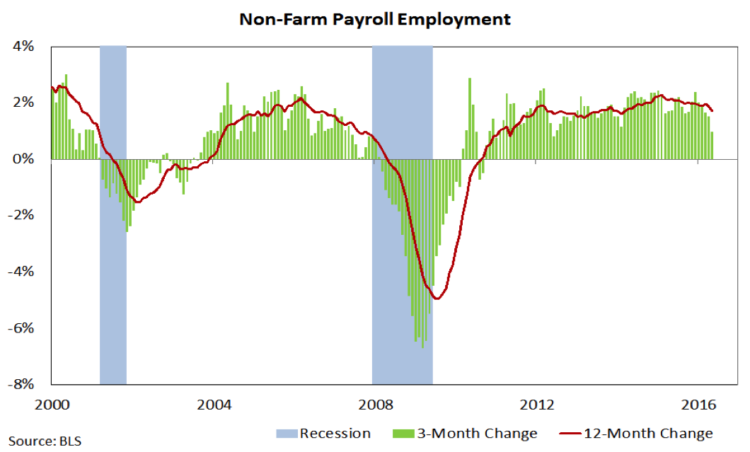 If demand for labor were being significantly curtailed, we would expect to begin to see a sustained rise in initial jobless claims. That has not been the case and instead claims have consistently been near their lowest levels in decades.

A few points support the view that the slowdown in hiring is largely about firms struggling to find qualified workers to fill open positions. The decline in the labor force in May (which pushed the overall unemployment rate down to 4.7%) was largely the result of the least skilled members of the labor pool (those with less than a high school diploma) giving up and dropping out of the labor force. We also continue to see evidence of upward pressure in wages and compensation. Average hourly earnings continue to move higher and the real hourly compensation measure in the productivity data has been revised sharply higher for both Q4 2015 and Q1 2016. On a smoothed basis, the growth in real compensation has accelerated upward in recent quarters, beginning to reverse a decade-long down-trend in growth. If history holds true to form, this could soon be joined by an upswing in productivity growth.

Given the cross-currents in the labor market, relying on a composite index that gathers inputs from various reports may be better than picking and choosing data point points that fit a narrative. Two such composites are shown here. Janet Yellen has referenced the Labor Market Conditions Index (shown below) in the past. This is more a working indicator than it is a specific data release, so we would caution against aggressively analyzing it.

An alternative approach is the Labor Market Activity Indicator, put together by the Kansas City Fed. The data behind this measure is more transparently reported (the next update will be mid-month) and so it is the slightly more preferred of the two. Both, however, show that upward momentum in the labor market, if not reversing, is at least showing signs of cooling.   The deterioration seen in these indexes in recent months could make it harder for the Federal Reserve to raise rates in June.