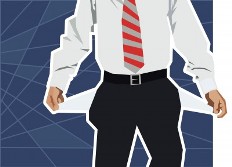 I see you – the only one who knew me
And now your eyes see through me
I guess I was wrong
So what now? It’s plain to see we’re over,
And I hate when things are over –
When so much is left undone

And I said, “What about ‘Breakfast at Tiffany’s’?”
She said, “I think I remember the film, yes
and as I recall, I think, we both kinda liked it.”
And I said, “Well, that’s the one thing we’ve got.”
—–“Breakfast At Tiffany’s” by Deep Blue Something

It was a good run while it lasted.  And the memories of those “good times” are about all Middle America has in common with the market powers that manufactured a once in a lifetime taste of breakfast at Tiffany’s (TIF)… and maybe a few adventurous lunch trips to Coach (COH) and Saks Fifth Avenue (SKS).

For much of the past 2 years, economists, investors, and mainstream media have played tug of war with the notion of economic certainty vs. uncertainty, “digging in” to find the golden nugget that answers questions like, “Is this a self-sustaining recovery?” and “Will the recovery produce jobs, boost housing, and have a wealth effect on those that need it most?”  So far, the recovery has been uninspiring, and the ensuing economic stagnation has pressured many who once entrusted in the tenants of government officials and fairly free markets.  But, as corporate earnings have increased, many pundits have decided to focus on the stock market as an enduring symbol of an economy taking flight.  Afterall, equities are Mr. Bernanke’s rising tide to lift all boats.  For those who follow this logic, I have news for you:  The stock market (collectively) is not a reflection of the economy.  And much of the underlying tension and uncertainty throughout America is due to the lack of recovery where it matters most:  Middle America.

“American” Corporations are now major global players, and the easy money that many economists hoped would trickle down to jobs, housing, and retail, is being used to shore up corporate balance sheets and fund major global initiatives.  Some may argue that shoring up balance sheets allows for additional hiring, but 3 years into the governments stimulus version of “Everything and the Kitchen Sink” and job growth is still stagnant.  Further, the duration of unemployment is particularly alarming.  Many unemployed Americans are finding a scarce job market that also requires an ability to adapt to a new technological skill set.  And for current job holders, slow to no wage growth has provided an additional hindrance.  All of this is coming on the heals of higher commodity prices (i.e. pain at the pump) and continued housing lethargy.   Yes, many Americans are feeling the pressure, and because many have depleted savings to make it through the downturn,  they haven’t been able to enjoy the benefits of the “equity tide.”

And so the story goes, without jobs and housing, many consumers are left with a tighter, more selective retail budget.  And this is ever apparent when looking at retail stock performance by assumed target consumer.  It’s usually a virtuous cycle for retailers:  with jobs and wage growth come increased consumer non-discretionary spending, and with increased spending comes greater margins and profitability.  But the jobs aren’t where they need to be and the easy money hasn’t trickled down to Middle America yet.  Furthermore, demand for lower prices to satisfy everyday needs have pressured mid-level and low price retailers.  This is underscored by the chart below.

Remember, when the market bottomed in March 2009, stocks were pricing in an apocalyptic-like collapse in consumer spending, so don’t let the actual percent gains fool you.  The key takeaway is the correlation/alignment between a retailer’s percent stock gains and their target consumer base; the more affluent the consumer is, the better the retail stock performance (From Coach +400% and Tiffany’s +350% down to Dollar General (DG) and Kohl’s (KSS) +40%).  Cut and Dry, those with greater financial resources had a higher liklihood of surviving the crisis, while keeping their financial portfolios in tact for the ensuing rebound in stock prices.  And when targeted consumers have more cash to spend, a retailer tends to garner pricing power and vice versa.

A similar story is told within “Big Box” retailers, where Wal-Mart (WMT) is struggling to find pricing power and margin enhancement, amidst demands for better deals and low price guarantees.

I agree with economists that say job creation and wage growth will spur a self sustaining recovery.  The question, though, is how to spur domestic job growth in the new Global Information Age.  At least enough to free up money for savings and additional non-discretionary spending.  To date, QE and other forms of stimulus have stablized the financial system and provided for greener corporate credit pastures, but largely by-passed the heart and soul of Middle America.  Time can be a great healer… but patience may be wearing thin.

A special thank you to my friend Clint for the weekend conversation that inspired this article.  Have a great week and happy investing.

No positions in any of the securities mentioned at time of publication.