The following is a recap of The COT Report (Commitment Of Traders) released by the CFTC (Commodity Futures Trading Commission) looking at futures positions of non-commercial holdings as of December 8, 2015. Note that the change in COT report data is week-over-week.

10-Year Treasury Note: Until Thursday, the two-year Treasury note yielded 0.95 percent, near recent highs of 0.96 percent.  Come Friday, it dropped seven basis points, to 0.88 percent. Yields were under pressure throughout the curve, with the 10-year dropping 14 basis points.

The two-year in particular was yielding 0.57 percent as early as the middle of October, and progressively rose, pricing in a hike in the fed funds rate next week.

The Fed has made it amply clear that it wants to move. What is yet to be determined is the future course of action.  It is too soon to say if this week’s drop in equities and Treasury yields will influence the Fed’s intentions going forward.

This much we do know.

The Fed will be tightening even as both the Eurozone and Japan are still easing. Ditto with China, with a weaker yuan to boot.  These three countries/regions make up 60 percent of the global economy.

The Fed has a tough hand to play. 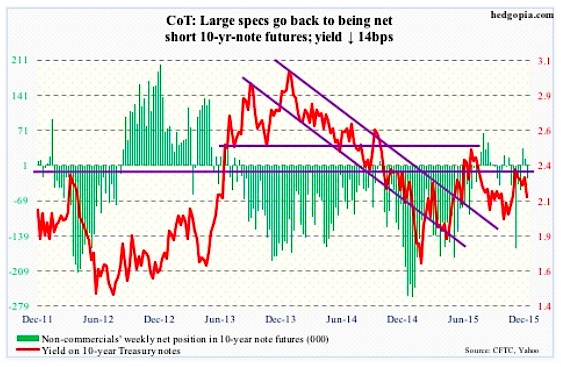 FOMC meeting begins on Tuesday, and ends the next day. Are markets genuinely ready for a hike? We will find out – particularly when it comes to medium- to long-term.

Tuesday has three other releases – CPI for November, December’s preliminary reading of the NAHB housing market index, and Treasury International Capital for October.

Consumer prices rose 0.2 percent in October, after two straight months of decline. In the 12 months through October, the CPI advanced 0.2 percent as well. Core CPI rose 0.2 percent and 1.9 percent, respectively. Annual core prices are rising at a faster rate than core personal consumption expenditures, which in October rose 1.3 percent.

The housing market index slid three points to 62 in November. October’s was the highest since 68 in October 2005.

Housing starts for November are published on Wednesday. Of late, the rather ebullient builder confidence is being reflected in starts. In October, they fell 11 percent month-over-month. Monthly data of course tend to be volatile. The 12-month rolling average has been north of a million units in 12 of last 13 months; that said, October was the first time in seven months it did not grow month-over-month – 1.084 million units versus 1.086 million in September.

Also on Wednesday, we get industrial production for November. Capacity utilization was 77.5 percent in October, down from 79 percent last November. Year-over-year, utilization has dropped for six straight months. 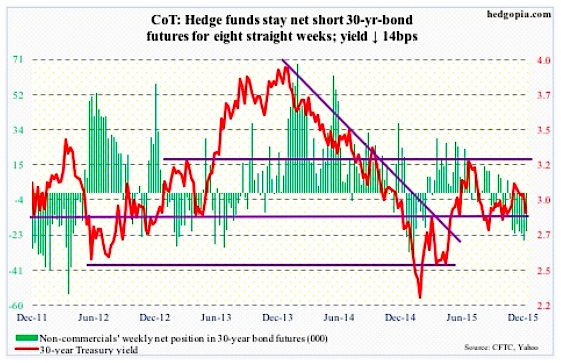 Crude Oil: The black gold is still reeling from OPEC’s decision last week not to make any effort to curb overproduction. It has a quota of 30 million barrels per day, but of late the cartel has been pumping out over 31 mbpd. In November, crude oil production increased month-over-month by 230,100 barrels a day, to 31.695 mbpd.

No wonder both Chevron Corp. (CVX) and ConocoPhillips (COP) are slashing their budgets for next year – the former by 24 percent, to $26.6 billion, and the latter by 55 percent, to $7.7 billion.

In the end, the drop in crude oil stocks for the week ended December 4th was no help to the price. Stocks dropped by 3.6 million barrels, to 485.9 million barrels – a five-week low.

Oil production fell, too, down 38,000 barrels per day, to 9.16 mbpd, essentially wiping out the prior week’s increase. Oil production peaked at 9.61 mbpd in the June 5th week.

The rest of the EIA data leaned bearish.

Last week, crude oil prices sat on August lows, and looked like they wanted to go lower on a weekly chart. This week, it collapsed, down nearly 12 percent.

Non-commercials continue to cut back, with net longs at a three-year low per recent COT report data. 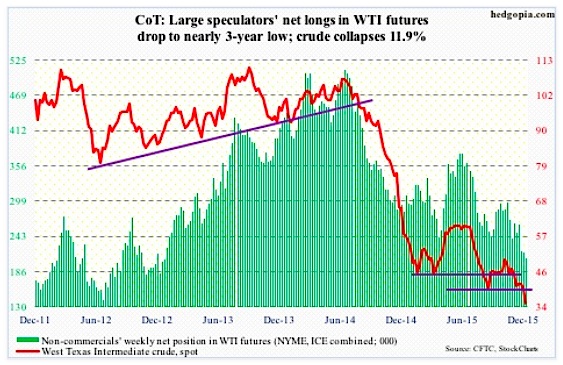 E-mini S&P 500: The index this week fell out of the pennant it had carved out for itself.

Flows continue not to cooperate. For the week ended Wednesday, $8.6 billion was withdrawn from U.S.-based equity funds (courtesy of Lipper). Since September 30th, inflows have only totaled $2.2 billion. In the meantime, in the past three weeks north of $37 billion has move into money-market funds.

Foreigners have been shunning U.S. stocks for a while now. In September, the 12-month running total stood at minus $95 billion.  The last time this metric was positive was October 2013.

Data such as these give reason for shorts to hang in there, and they have.

Non-commercials continue to cut back net shorts – now sub-100,000 contracts for three weeks; that said, this COT report data was before Friday’s carnage.

Support at 1990 is a must-hold… or the decline could get ugly.