Investing is not easy. If you are an active investor, directly involved in the investment process, it requires an immense amount of work. Picking investments, developing a buying process and a sell discipline, constructing an overall portfolio, risk management controls, monitoring key people and execution.

Even if you outsource much of this to professionals, you are likely still involved in key decisions on asset allocation or manager / investment selection.

Meanwhile lurking behind every buy, sell or hold decision is a basket of behavioral cognitive and emotional biases that may negatively impact your investment process. And investor behaviors matter, a lot. Dalbar Inc. has been running analytics comparing the actual returns investors experience over time compared to the index or even the return on funds. Essentially, they run dollar weighted returns which incorporates the decision on investors on when and which funds to buy.

They also did some really interesting analysis on the source of why actual investor returns are lower than the index. At the end of 2015, the S&P 500 (NYSEARCA:SPY) had a 20-year annualized return of 8.2%. The actual investor return was 4.7%, missing out on 3.5%. According to their analysis, some of this was caused by investors lacking cash to invest or needing to remove capital from the market. These explained 1.2% of the discrepancy. Fund expenses were another 0.8%. That left 1.5% attributable to voluntary investor behavior. Buying or selling at the wrong time, holding onto losers too long, performance chasing, being sold by ‘stories’, the list goes on.

Based on this study, investor behavior was a bigger drag on performance than fees. Every client now talks about fees, making important investment decisions based on fees, which is good as it is an important determinant of investment success. But not enough people are talking about behaviors. We think it is time to talk about it, and to develop tools to mitigate the negative impacts.

Combining both economics and psychology, behavioral finance if focused on researching and uncovering evidence of sub-optimal decision making. Many of these instances are traced back to either a cognitive or emotional bias. Cognitive biases impact how we perceive information. Emotional biases or heuristics are due to illogical or distorted reasoning. There are many of them, with a few of the more popular depicted in Chart 2. 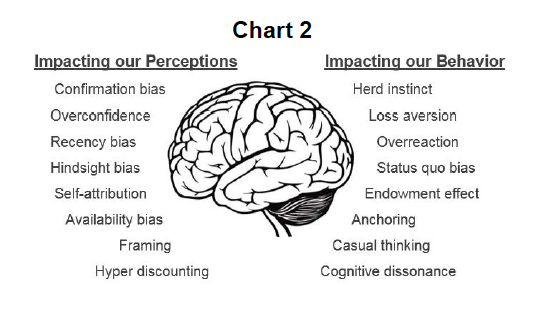 And, depending on what type of investor you are, some may be more applicable to you than others. For instance, if you outsource much of the investment process to professionals (money managers, advisor) then you may more likely suffer from loss aversion, status quo bias or framing. If you are more actively involved in the investment process, then availability bias, overconfidence and herd instinct may be of greater risk. The good news is nobody suffers from all of them, the bad news is it is hard to know when each bias may impact your investment process.

In the following sections, we will highlight a couple of biases and introduce methods to help control or check this behavior.

Confirmation bias causes investors to seek out and evaluate information in a way that fits with existing thinking or preconceptions. Essentially you pay more attention to information that supports your view. Information or evidence that is contrary to your view is often discounted or discarded. As a media example, Fox News caters to the right wing of political views. The audience is dominated by right wing oriented viewers and this serves to confirm their views. To garner a more thorough view of topics, absorbing multiple sources of media, some that agree with preconceptions and some that offer contrary views, would likely result in a better understanding of all the points of view.

Confirmation bias can narrow an investor’s focus and can cause us to miss a big risk or change in direction. It can also embolden investors to take on more concentration risk in an asset class, sector or position.

How to Defend against Confirmation Bias – Force yourself to consider why an investment or strategy may not work out (Prospective Hindsight). What could go wrong with an investment? This makes you more open to seeing, considering contrary views and evidence.

It is estimated that the pain from a loss is roughly twice the magnitude of the pleasure of an equal sized gain (chart 3). This is contrary to rational economic theory which assumes a $10 loss would offset the pleasure of a $10 gain. Loss aversion causes investors to avoid losses, and can prevent a person from unloading unprofitable investments, even when there is little prospect of a turnaround. Some call this ‘get-even-itis’. Loss aversion can lead investors to sell winners (often too early) and hold onto losers (often too long). 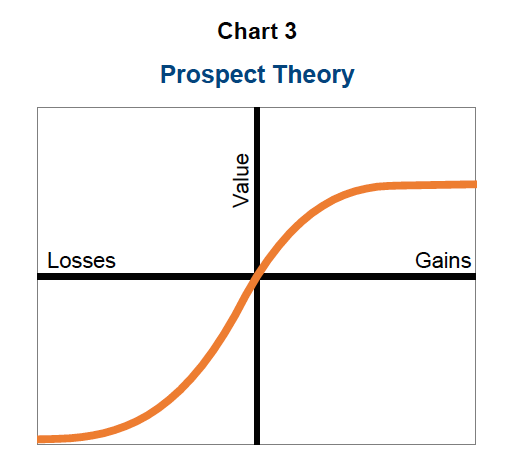 As an example, pretend you make two equal investments a year ago into ABC and XYZ Corps, now you need to raise some capital. Which do you sell? (chart 4) 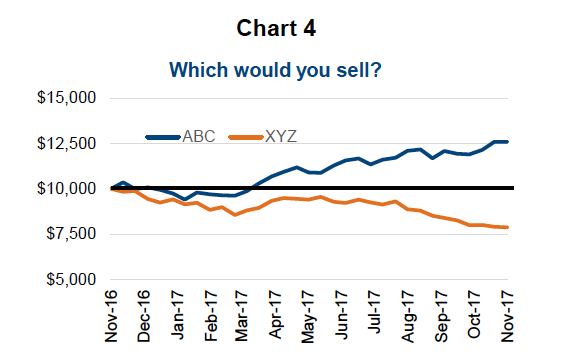 Selling ABC (the winner) would make you feel good, locking in a win. This would also alleviate the fear of doing the round trip, should the share price fall back down. And even if it goes up, you still made money. Now consider selling XYZ, a paper loss becomes a realized loss. If it does recover, you would feel foolish. BUT, research has shown winners tend to keep winning while losers tend to keep losing, on average of course (chart 5). This would argue for selling XYZ and maintaining ABC position. 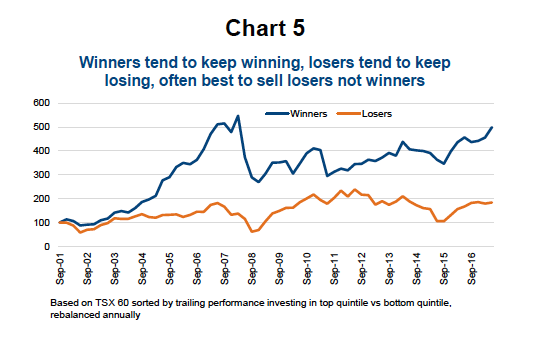 Loss aversion can cause investors to sell winners too early and hold onto losers for too long. This can occur for funds, stocks or other investments.

How to Defend Against Loss Aversion – Ignore or remove the original cost from your decision process. Consider only current market values and portfolio weights. For poorly performing investments, consider if the future prospects of the investment have changed or does the original thesis for owning still hold. Sometimes it’s just the cycle of the markets. You can also set guidelines to sell before emotions of regret set in.