Good morning and happy Friday. Time to look at some important S&P 500 levels and analyze the current price action.

A bounce off yesterday afternoon lows sends us into the current congestion zones at this time in the premarket.  Formations are still bullish but weak so I expect another failed rejection of S&P 500 resistance and a drift into support zones below.

2 key S&P 500 levels:  Near-term support now lies beneath near 2076 region and near term resistance near 2089 region. Breaches are likely to retest before continuing due to damp momentum readings.

Shorter-term time frame momentum indicators are bullish, and higher still than yesterday’s. Longer cycles are flattening, and in upward trending territory. All indicators at this point show buyers in charge, but their strength is not aggressive.

CL_F  (Crude Oil Futures) – The chart is now in a descending triangle, with some measure of bullish momentum still showing.  The critical region that needs to holds for buyers is 41.25-41.4 – oil clearing is still facing headwinds.

We begin our 6th day in a very congested zone – something is going to give soon.

Downside motion below the failed retest of 2080, or at the failure to hold 2087.75 (watch momentum- that would be aggressive ) opens a short. Short trades should be staged into support and then cautiously watched after some profit is taken, until we fail 2045 on a retest- that level represents a very strong buying support zone and will keep the chart essentially bullish. 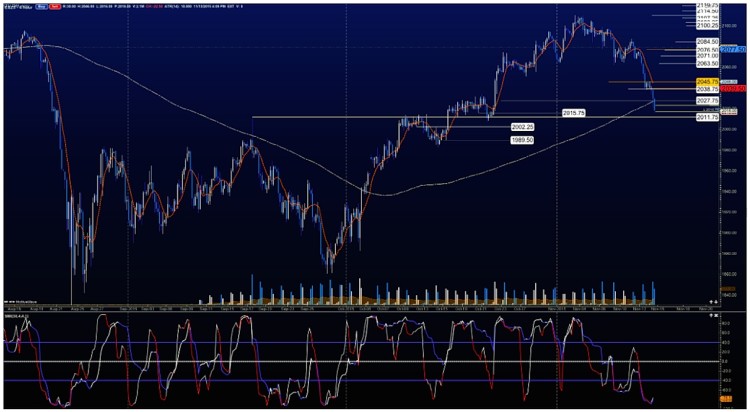 Visit TheTradingBook.com for details on intraday and short term swing trading setups, and visit The Trading Vault and SMB Capital to learn how to trade the way I do.