Buyers remain in control of the broad price action, buying the lows at perceived value areas. The FOMC decision still looms ahead, but it seems clear that rates will rise. A breach above 2095.5 should expand and then reject, but will likely come into a higher low as buyers force the charts north in a seasonal move upward.

Longer time frame support still lies near 2045 region for S&P 500 futures, but short term support is much higher at 2083; and near term resistance is near 2095.25 region. Because we are under tepid momentum readings still, breaches on either side of those levels should test and return to their breach levels before continuation. Steep pullbacks remain buy zones in these formations as buyers continue to exert more control.

Watch for the lower highs as a tell tale sign of exhaustion for S&P 500 futures.

Shorter time frame momentum indicators are mixed but rising, and higher than Friday. Longer cycles are flattening, but still in bullish territory, and divergent momentum is continuing to be present upside. The charts have quite a bullish slant but show weakness as far as continuation goes

See today’s economic calendar with a rundown of releases.

Be sure to visit me this Thursday with @Schwab4Traders – you can register here.

Oil has lost critical support zones near 40. The Saudis did not agree to cut production, as expected, but now the USD has faltered a bit under the Euro holding with limited support expenditures from the ECB, and that makes for muddy spaces. A weak dollar extends to pricing in oil, which might be the reason that the chart is not cascading downward. Weak support sits at 39.15, while resistance lies near 39.8. For an intraday trading formation, we see a range event between these levels noted.  Big oil traders remain skittish, and uncertain- caught in a band of ‘hope’ for support as I see it, but most roads point to lower prices ahead.  Above a 39.84 retest sends us near 40.1, then 40.35 and 40.68.  Below a 39.15 retest sends us to 38.9, 38.6, 38.3, and perhaps 38.05. August lows are on approach, but it will be a choppy road down. Momentum on short time frames is negative but rising.  See premium blog for tighter levels. 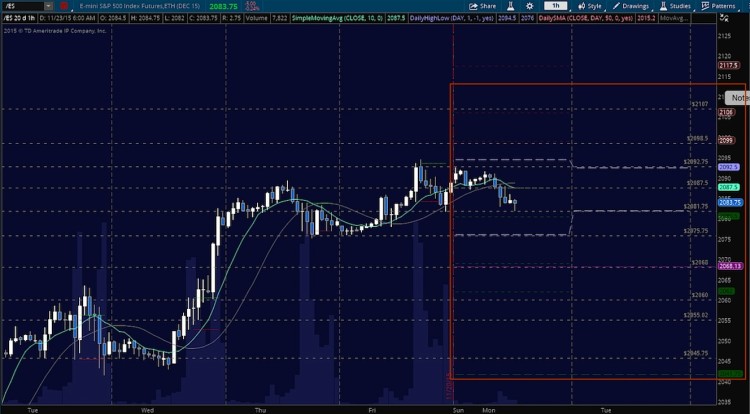 Downside motion below the failed retest of 2083, or at the failure to hold 2089 opens a short (watch momentum on tight time frames- that would be an aggressive short).  [BIG PICTURE NOTE => Short trades should be staged into support and then cautiously watched after some profit is taken, until we fail 2045 on a retest- that level represents a very strong buying support zone for S&P 500 futures. This will keep the chart essentially bullish on larger time frames.]  Patterns still look very tired, buyers are using trend and momentum to keep in place the move upward.  Retracement into lower levels from 2083 gives us the targets at 2079.75, 2075.5, 2072.25, then 2068.5.