Tech Roundup is simple. You get 2 of the most interesting technology stories, 1 chart, and 1 bonus video.

Pinterest Gets $12.3B Valuation as Image AI Becomes More Important

Only 4 years ago Pinterest was valued at $3.8 billion. This week however they raised $150 million from their current investor base, giving the company a valuation of $12.3 billion. Pinterest remains a unique asset in the world of apps as they have roughly 175 million users, with the majority being women. They were able to generate roughly $300 million in revenues from ads in 2016, which is a 67% bump from the previous year. Will they go public in the near future, some reports suggest so, but with this capital raise, that timeline may be pushed back slightly.

While Pinterest has been slow to monetize their platform, they have been quickly adapting to the newest and very popular technologies. Recently they announced “Pinterest Labs”, which will be managed by their Chief Scientist Jure Leskovec, and will be their high tech wing of the business which is using machine learning and other artificial intelligence capabilities.

The team recently announced “Lens”, which is their version of Shazam. The idea is simple, take a picture of anything that interests you and Pinterest will find photos which match or are similar to the captured photo. This can help designers run projects more efficiently, let you find shoe styles you appreciate, and there are many other applications to this technology.

All in all, while $300 million in revenue is in fact a very small amount for a $12.3 billion valuation, Pinterest has a unique set of assets. Pinterest has a large and engaged user base, a unique yet focused demographic, image based content, and time spent on their platform per month is 2x that of Twitter and 4x that of LinkedIn. Despite those strengths they seem to be carefully working on various monetization strategies.

While an IPO is not coming in the next 3 months, we will be paying attention to this company when they do decide to announce.

It’s 2017 and we got another Apple World Developers Conference. Typically one of the best conferences of any tech company. So what did we get this year that was cool, and what was cool  but just not that cool.

Let me start with the first.

Cool But Just Not That Cool:

APPLE WATCH: The #1 selling smartwatch and top customer satisfaction rating had some software feature upgrades to watchOS that stood out. Health is their most commonly used watch function, therefore it made sense to start there. They added very popular High Intensity Interval Training “HIIT” workouts to their workout app, along with swimming. This gives the watch some more use cases for your everyday user. In addition they added new dock screen on watchOS4 which automatically prioritizes your notifications. That was really the bulk of Watch upgrades.

APPLE TV: The upgrades of tvOS was also pretty lame. The main announcement was the addition of Amazon Prime Videos to their platform.

MAC: The Mac saw some improved specifications. “High Sierra” which is their newest macOS has a faster browser, uses 35% less disc space, upgraded and smarter email and photo organization functionality, and uses Apple’s newest file system. They also upgraded their graphics which now supports advanced VR and AR capabilities. Their iMac saw screen enhancements, more RAM, additional ports, and much more. The enhancement for VR was the most important item here as technology heads into this direction.

APPLE PAY: Apple now added their version of Venmo which may or may not catch on. But they made it simple and intuitive for users. This makes their solution an easy decision for someone like myself who already uses Apple Pay. This move into payments will allow Apple to further own relationships with their customers, and move stronger into the payments ecosystem. One thing they miss here is the social aspect which Venmo brings, so it will be interesting to monitor attach rates to the product.

APPLE HOMEPOD: The biggest announcement of the day was their move into the home. The HomePod is a Siri enabled device which focuses on amazing music sound. They differ from the competition in 3 ways. The sound will be on par or better than the best sound systems, the system will be smart as it is Siri enabled, and they have the entire ecosystem of Apple products which are likely to interact. The low price point of $349 was smart in our view, as the need to get into homes is important to secure the entire Apple ecosystem.

Others: There were many other announcements as it relates to the iPad, augmented reality, and other software features, but not enough to really discuss here. 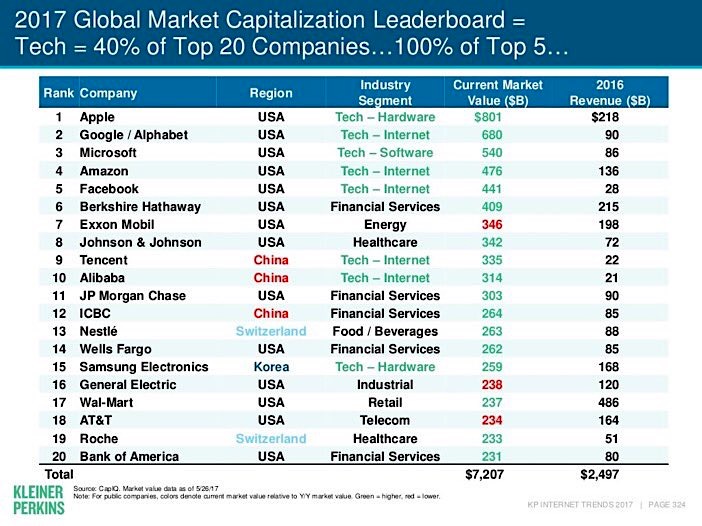 Technology is becoming more and more important. If you don’t believe me then take a look at the chart above. Apple, Facebook, Google, Microsoft, and Amazon combined make up nearly $3 trillion in market cap. We think this is only the start as companies like Wal-Mart want to become more like Amazon, and banks want to use technology to automate their operations.

Have you ever wanted to race against yourself. I haven’t but it is a pretty cool motivation tool. There are real applications for this type of technology, starting with athletes and ending with your everyday runner. Most importantly for Nike, this is pretty good marketing. Enjoy the video.

That’s all for this one. Thanks for reading.

Is the September Stock Market Correction Over?