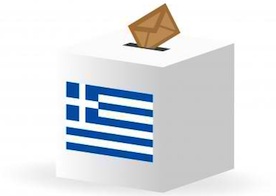 By Alex Salomon
With my eyes fully opened, I am keenly aware that Greece is facing yet another moment of national destiny, where they could finally rise up to their forefathers and their pride and heritage, or become the center stage of a dreadful, fateful rise of Neo-Nationalistic Populism, the potential powder keg of a global meltdown against Turkey, Serbia, Albania and all of Greece’s historical foes. I understand time is ticking and I see both sides. (Read “Grexit: 5 Scenarios Facing Greece“)

But then I closed my eyes for a second… and I, too, had a dream.

Imagine that on June 17, Greeks decide to elect a continuity government, willing to abide by the current road map for debt reduction and debt repayment. Imagine that they even end up accepting some German guidance on tax collections, to change their laws and their Constitution to finally tax their powerful shipping companies and the Orthodox Church. Imagine even that they accept to enact something as simple as prohibiting all cash transactions above E500 so that tax receipts can be matched to credit cards or checks.

Imagine that empowered with total Congress and Government majorities, Francois Hollande puts in writing a promise for the June 25 EU Summit to Angela Merkel offering a fair trade, a win-win situation, in which he will push and enable a strict Golden Rule for all EU countries, a Constitutional guaranty of balanced budget; in which he will offer some French sovereignty for a more direct, political Union; in exchange of which he will ask Angela Merkel for speedy, non-ideological changes; for smart Euro-bonds — not for more bridges and tunnels, but to create true Energy growth and independence for Europe (the EU currently has a $550B energy import deficit, up from $150B in 2002… this radical change could arguably create 10M, maybe up to 15M new jobs in a zone that has a total of 23M unemployed).

Imagine that the European leaders will finally agree to a financial and fiscal unity, later guaranteed by a broader democratic control (maybe the European Parliament).

Imagine that this compromise will finally bring relief to the Eurozone, finally bring creative growth on one hand, Constitutional austerity and balanced budgets on the other.

Imagine that this evolution will bring a much needed relief to the worldwide equity markets and finally bring the normal, natural QE that Ben Bernanke had been envisioning: a healthy, sustained bull market, that would lift the S&P to a steady rise, all the way to 1700 or 1800, in line with slightly bullish (but not exuberant) historical P/E valuations.

Imagine the moral, psychological, financial effects of finally breathing out of four years of ongoing doom and gloom. Just imagine the global bullishness stemming from such a reflation.

Then imagine that it will finally help the USA address its own fiscal nightmare — not giving lessons, but actually fixing things.
Imagine that a stronger, less divided USA, back to being empowered, bullish, on track for a stronger future… it could even influence China to embrace dual soft landings; one for its economy and the other pertaining to a slow, modified adoption of a more democratic set of rules.

Maybe it does not all start with Greece, and maybe we just need Francois Hollande to agree to embrace fiscal responsibility and Angela Merkel to understand and back creative growth and Euro-energy-bonds. Maybe. But really, we need to dream again…