It’s been a wild year for stocks. And last week exemplified that. It wasn’t just any old wild week, though… so it’s only fitting that we dig in and look at a few market rarities and historic market returns.

In my last post, I introduced you to one of my favorite quotes regarding the S&P 500 Index (INDEXSP:.INX).  Here it is once more:

“Going forward, the S&P 500 will probably trade beyond the limits of human imagination.”

What transpired the last seven trading days would seem to fit the bill, and it’s not limited to just the S&P 500.  Stocks plunged in response to “Brexit”, only to then recover nearly everything they lost from June 23rd’s close.  Alternatively, the yield on a 10 Year United States Treasury Bond (TNX), plunged in response to “Brexit”, only to then recover absolutely nothing.  As someone who has a fascination with identifying rare price action and their subsequent forward tendencies, this week was a dream.  Here’s a daily journal of some of the rareness I was able to capture the last five days in both the stock market and bond market.

TNX closed June 23rd at 1.73%.  Two days later TNX closed at 1.46%, a two-day decline of -16.04%.  This is the single largest two-day decline for TNX dating back to 1962.  Additionally, TNX declined by 5% or more two consecutive sessions on Friday June 24th and Monday June 27th, and back to back -5% sessions has only happened 4 other times since 1962.  This led me to identify the tendencies for the S&P 500 following a crash in TNX.  Looking at all two-day declines of greater than -10% for the 10 Year Yield since 1962 reveals the following historic market returns:

However, when the 10 Year Yield (TNX) crashes over two trading sessions the S&P 500 usually doesn’t go unscathed over the forward 20 trading days.  You’ll note that in all 10 prior instances where TNX plunged by more than -10% in two days, the S&P 500 traded below its signal date close at some point over the forward 20 days.  You’ll also note it tends to do so by a meaningful margin, on average by -5.50%, with the lowest forward 20-day drawdown from signal date of all occurrences being -1.52%.  This would target a trade back toward ~1900-1970 at some point prior to July 26th.  Also, with the S&P 500 gaining 1.77% on Tuesday, and currently being up 5.11% the forward 4 days from signal date, the sample that looks eerily similar is 11/1/2011.  I’ve annotated the chart below as the similarities and possibilities to the current market action is striking. 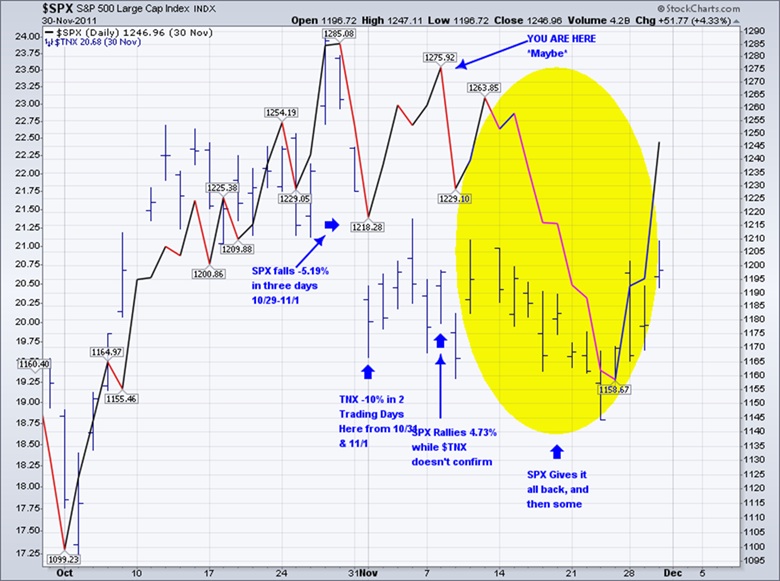 Can you imagine the S&P 500 trading down to ~1900-1970 prior to 7/26?  Probably not, and that’s because the S&P 500 tends to trade beyond the limits of human imagination.  Alternatively, history would perhaps suggest it’s also difficult to imagine a scenario where the S&P 500 doesn’t trade below 2000.54 prior to 7/26, as all 10 instances where TNX crashed by more than -10% in two trading days ultimately saw the S&P 500 trade below its closing value from the second trading session over the forward 20 days.

On Tuesday June 28th the S&P 500 gained 1.77%, while the yield on a 30 Year United States Treasury Bond Yield (TYX) was red on the session, declining by -0.17%.  This has happened 11 times since 2011 and has generally been a negative sign for the S&P 500 going forward with the index producing negative median forward 10 and 20 day historic market returns. The median forward 20 day drawdown is -4.65%

At the close on June 29th, the S&P500’s trailing four day returns were as follows: