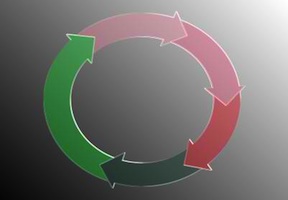 By Joshua Schroeder
The way financial markets digest and interpret economic information is truly fascinating. For instance, when sentiment is strong, almost every data release is interpreted with an overly optimistic spin. And conversely, when market sentiment turns south, look out below because you can count on financial markets getting irrationally pessimistic.

In my opinion very little has substantially changed with the economic fundamentals (see my columns: Keeping an Eye on Europe & Prepping for a Fall Market Bottom) since the market reached multi year highs in April. However, here we are in June, having dipped briefly into correction levels, driving the perma-bears out of hibernation and into doomsday scenario mode (just in time to cue the contrarian bounce!).

This is most evident in the overly pessimistic interpretation of the most recent economic data. Let’s go point by point to illustrate:

1.  GDP was revised lower by 0.3 pps to 1.9% but this was mostly due to a smaller contribution from inventories. Final sales to end consumers actually grew at a 3.0% annual rate for the quarter (annualized), above the 2.7% average rate for this recovery. Equipment and software investment spending (CAPEX) was also revised higher. So, the headline number fell but the quality of the mix improved.

2.  The Institute for Supply Management (ISM) manufacturing survey fell 1.3 points to 53.5 in May (readings above “50” signal expansion) but only after reaching a 10-month high in April. In other words we continue to experience moderate growth in manufacturing. And on a positive note, the new-orders component, a component of the composite leading indicator, jumped to 60.1, the highest since April 2011.

3.  Personal income data for April were by far the strongest of the group. Wage and salary income was up 0.2% for the month and has advanced 3.4% (annualized) and 2.2% (annualized) over the last three and six months, respectively. Additionally, private-sector employment compensation is running at a healthy 4.0% annual rate over the last three months. Lastly real personal income slowed to a 0.8% annual rate over the previous three months, however, real disposable income picked up over the same period and is at its highest rate since early last year.

4.  The Pending Home Sales Index, which tracks contracts that have been signed and are, awaiting closing, fell 5.5% in April to 95.5. The Bloomberg median forecast was for the level to be unchanged. While disappointing, the index is up 14.4% year-over-year and the level still suggests existing home sales will see their best performance since 2006. As a basis for comparison, the index averaged 90.3 in 2011 and 89.4 in 2010.

5.  On this point there is not getting around it, the employment data for this past week came in much weaker than consensus expectations. Total payrolls rose 69,000 versus expectations of around 150,000. Governments continued to shed jobs and construction employment fell 28,000. In the household survey, the equivalent measure of private wage and salary workers increased by 172,000 in May (up from 135,000 in April) and is averaging 471,000 jobs per month this year (not a typo). The unemployment rate rose 0.1 pps to 8.2% as the labor force increased 642,000. There has been a noticeable pickup in re-entrants the last two months.

Clearly the debt debacle in Europe is troublesome and less than stellar US economic data coupled with slower growth from emerging markets isn’t doing the global economy any favors. However, good buying opportunities are often accompanied by a perceived lack of clarity and fear in the marketplace; these sentiment cycles often push extremes and offer opportunity on the buy and sell side (for the patient and measured).

As so often seems to be the case, I believe the current pessimistic theme is another example of irrational pessimism with regard to US economic data. This sentiment cycle is likely to linger throughout the summer, as presenting the positive side just doesn´t sound as good as the current doomsday scenario.

No positions in any of the securities mentioned at the time of publication.