For many professional option traders, iron condors form the basis of how they generate monthly income. Iron condors are a strategy that allows you to profit from sideways moving stocks, but they can also profit if the stock experiences slightly higher or slightly lower prices over the course of the trade.

Where beginners get in to trouble is when a stock makes a big move in either direction shortly after placing the trade.

This is where experience comes in and skilled traders are armed with multiple different tactics they can use depending on the situation.

With markets starting to move around a lot more than they have in the past two years, it is a great time for you to learn a few different ways to adjust an iron condor and the strengths and weaknesses of each adjustment.

Let’s look at an example iron condor from the December 2013 expiry. The position started as a neutral trade, but RUT then rallied and the position has become skewed with a delta of -45.

The short calls are 5.01% away from the current price whereas the short puts are 9.47% away. 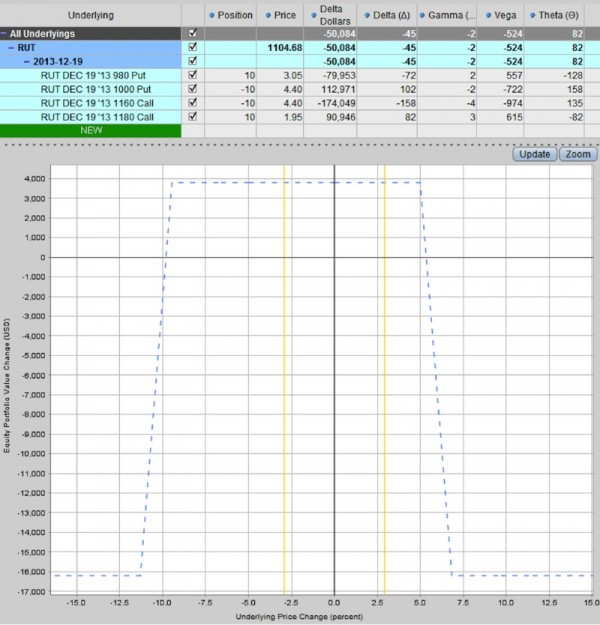 We could leave the position as is if we anticipate RUT to move back down, but the conservative route would be to adjust the trade.

Let’s look at a few different techniques you could use and analyze the advantages and disadvantages of each. 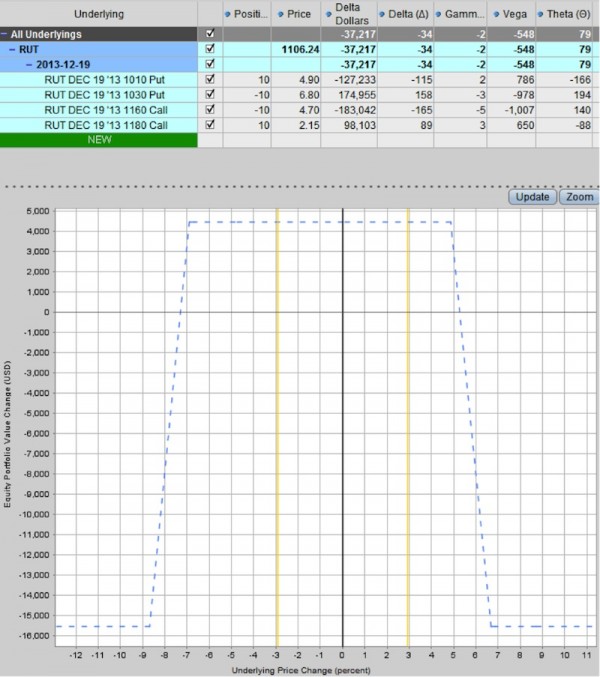 This adjustment is an attacking adjustment rather than a defensive adjustment. We are bringing in more option premium and increasing our risk by bringing our short strikes closer to the index price.

With this adjustment we have reduced the overall position delta and given ourselves a more centralized expiration graph. The short calls are still 5% away and the short puts are 6.76% away. Our expiration graph is now more centered between the puts and the calls.

This adjustment brings in an extra $550 in option premium while keeping capital at risk roughly the same.

The delta on the trade has dropped from -45 to -34 and vega has increased slightly. Theta remains about the same.

Assuming you want to leave the call spreads as they are; another adjustment you could try is adding more contracts to the non-threatened side.

With this condor, rolling the short puts up 30 points might be a bit aggressive considering that the market is overbought and starting to show weakness. Instead, what we can do is go to our full allocation of 20 contracts in the puts and leave the calls as they are.

Here is the new profit graph based on this adjustment 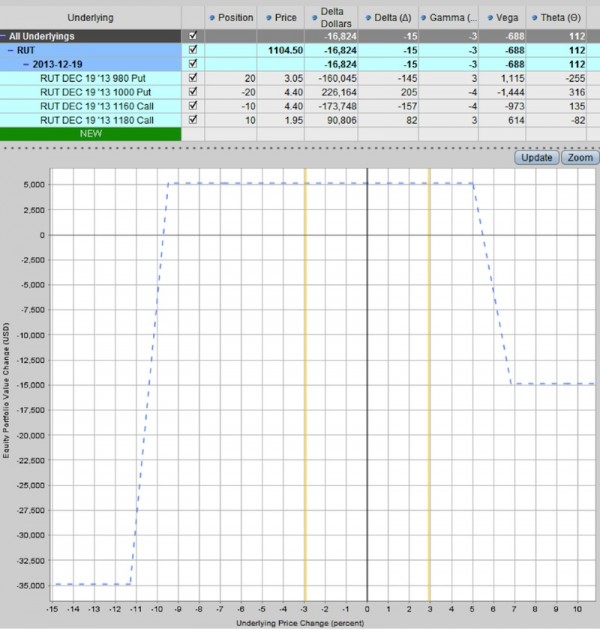 This adjustment increases the capital at risk on the downside, but gets our delta back into a more neutral position. It reduces delta by more than the previous adjustment, BUT risks are higher if there is a sharp reversal.

The Vega/Theta ratio has dropped slightly from 639% to 614%. By selling another 10 put credit spreads, we have increased the profit potential by $1,350.

When adding spreads to the non-threatened side, you wouldn’t want to sell them for less than about $1. Otherwise you’re not getting adequately compensated for the additional risk you’re taking on.

The first two examples would be considered offensive or attacking adjustments. Both methods increased the income received.

The first method moved the short strikes closer and the second method increased capital at risk. 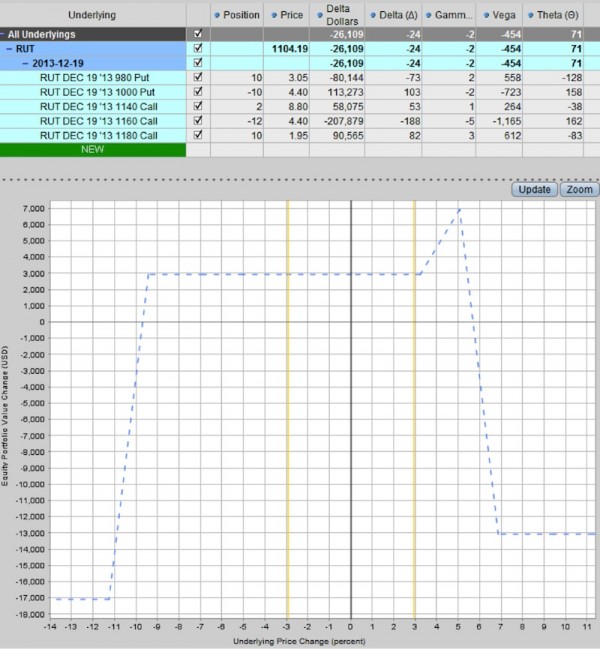 Unlike the first two adjustments, this method costs us money to buy the debit spread.

One advantage of this adjustment is that it reduces our capital at risk on the threatened side.

This adjustment idea is similar to the last one in that we are adding a debit spread in front of the threatened side. In this case we are placing the debit spread further away from the short calls to create a larger profit zone. 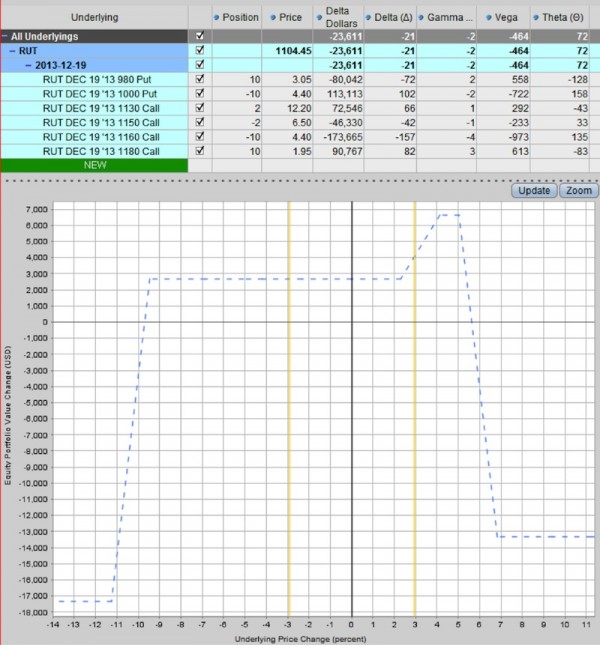 Again, you have to be careful with this not to get sucked into thinking about the profit zone. You still have negative delta, so you do not want RUT to rally, especially in the next few days.

You only want RUT to start entering the profit zone with around 2-3 days till expiry or less.

The greeks on this adjustment are fairly similar to the previous adjustment. This adjustment costs slightly more at $570 as opposed to $440 so your income potential is further reduced.

If a stock is particularly fast moving and you need a quick adjustment then adding a long call option in the next expiry can be a good idea. Usually this will be a temporary measure but it helps stem them bleeding and gives you time to think about whether you want to remain in the position.

If the stock expires close to your short strike you can end up making some extra money from the long call if you decide to hold on to it.

In this example we’re adding the long call at the same strike as our short call. The adjustment costs $960 and brings delta down to -22, and also brings vega down significantly.

If the market continues to move against you, the gains on the long option will help cushion the losses on the credit spread. 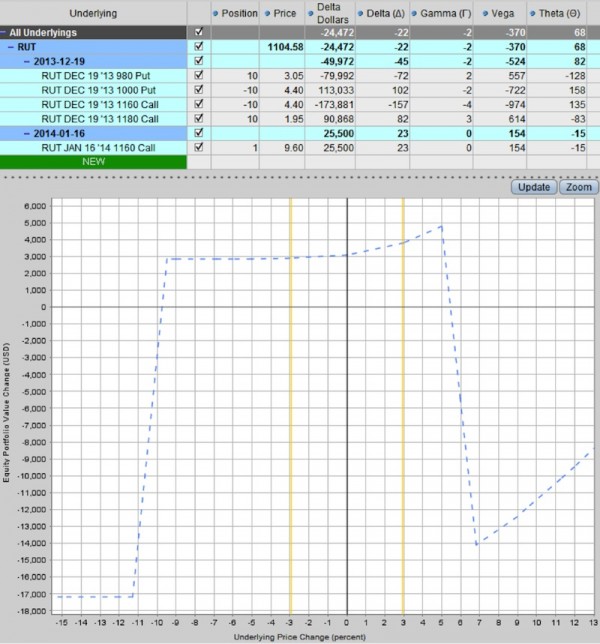 If you’re looking for a similar adjustment to the last one, but don’t want it to cost as much, you can buy a long option in the next month, but go a little bit further out of the money.

This adjustment costs $550 as opposed to $960, but the trade-off is that it doesn’t give you as much protection. Your delta and vega exposure are not reduced by as much as the previous adjustment. 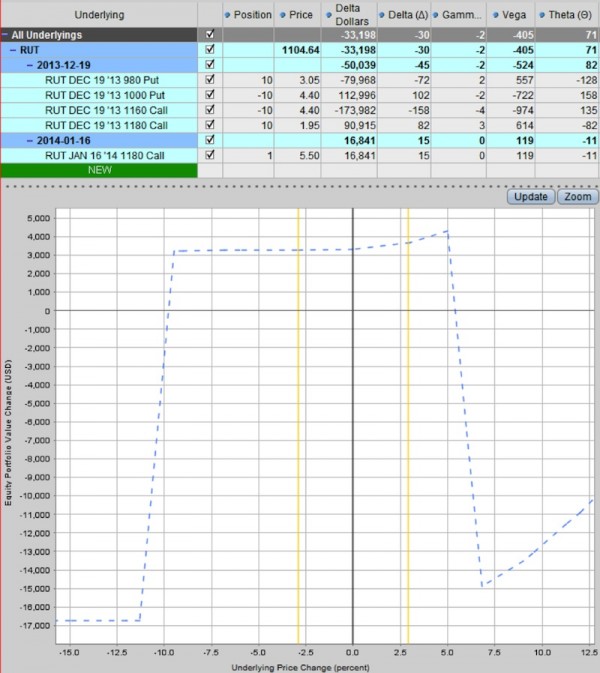 Adding a calendar spread centered on the short strike can be an attractive adjustment option that gives you a nice tent-shaped profit zone.

The great thing about this technique is that it reduces delta and vega, and also increases theta. A good rule of thumb is to trade 2-3 calendars for every 10 credit spreads.

The downside is that the income potential of the trade is greatly reduced if the market reverses. 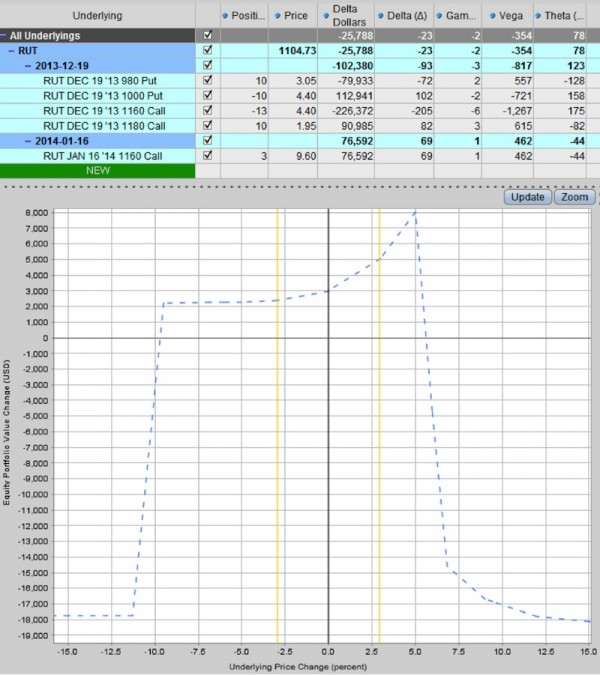 Rather than adding a calendar at the short strike, you can add a butterfly. This creates a similar profit tent to the calendar, however vega is not reduced in this case.

The advantage of this technique as opposed to the calendar is that keeping all the options in the same expiry month can make things a little simpler. You don’t have to worry about things like volatility skew. 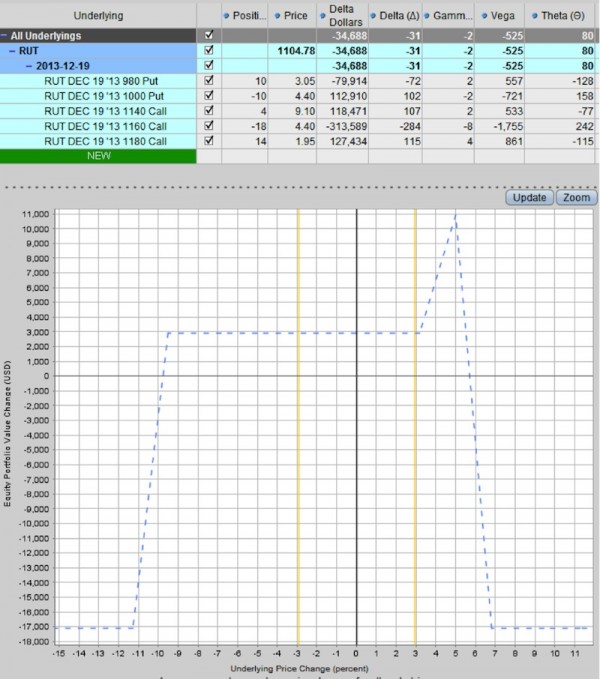 The last adjustment option I’ll present here is repositioning the entire condor by rolling both the puts and the calls in the direction the market has moved.

This adjustment may cost some money to perform. When you roll the threatened side, you will receive less income from selling the new spread. On the non-threatened side you will bring in more income because you are moving the spread closer to the stock price.

When you make this adjustment, you can also think about adding more capital to the trade.

The advantage of this technique is that you will re-center the iron condor structure so that it is once again delta neutral. 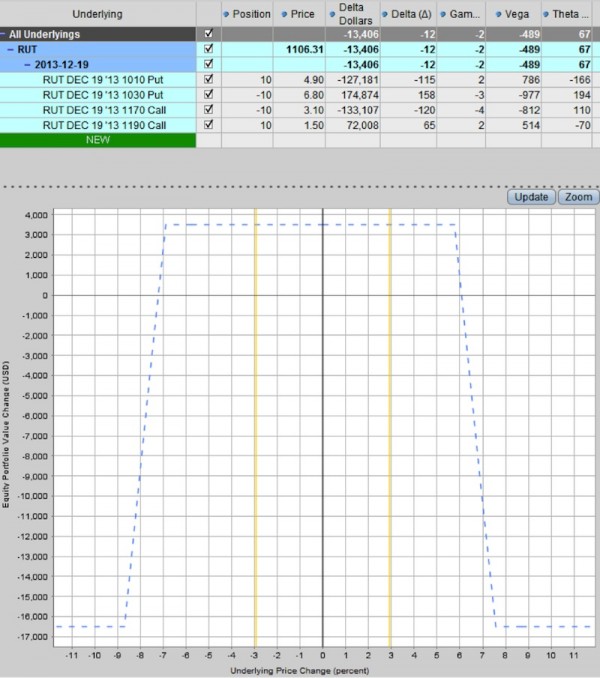 Below is a summary of all the different adjustment techniques presented above. 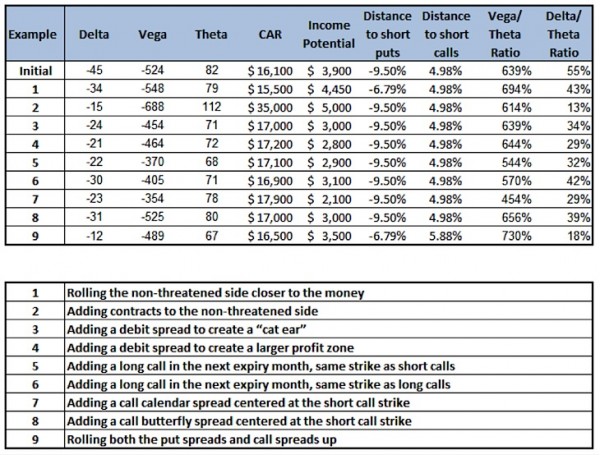 While this list of adjustment techniques is not exhaustive, I hope it has opened your eyes to some new methods of adjusting an iron condor. Some other techniques you can also consider include reducing the number of contracts on the threatened side and rolling the threatened credit spread out to the following month. Thanks for reading.