Since the election, the economic data continues to show that the US economy is starting to grow. A growing economy favors stocks over bonds. I have been increasing the amount devoted to stocks gradually since early December.

In general, of my accounts may have around 30% invested in stocks and the rest in cash at this point. If the political landscape unfolds in a way that favors growth I would expect the amount in stocks to increase. Until then, there is still a significant cash allocation.

We started out in early 2016 with a focus on US Treasury bonds (UST)’s because the economic data indicated that economic growth was continuing to decelerate. (Market movements don’t always correlate closely in the short-term with economic acceleration/deceleration but do tend to do so over the long term.)

That positioning generally worked well the first 6 months of the year. The volatility (risk) was much less in this generally representative account compared to the S&P 500. From the beginning of the year till early February there was a 10%+ drop in the S&P 500 whereas the generally representative account was up over 3% (that’s a 13% differential between the two). The S&P 500 did recover over the next two months and the value between the bond positions versus being fully invested in the S&P 500 was roughly equal in early April. The values between the two were negatively correlated most of the summer but the bonds did rally into early July as the S&P 500 had a 5.4% plunge  and then recovered over the next few weeks. I think we would all agree that the ‘ride’ in bonds during this period was preferable to that of 100% in stocks.

Starting in the third quarter of 2016, treasury bonds started to trend down. Then the election happened. Bonds got hammered and stocks took off.

In my commentary after the election I explained that I liquidated the US Treasury bond positions starting the fourth day after the election and sold off the rest a few days after that and went to all cash. Over the next few days/weeks there were several data points that indicated that the economy was starting to accelerate to the upside. On December 8th/9th I began adding stocks and/or mutual funds to generally representative client accounts so as to participate in potential growth. The change in allocation was dramatic because of the change in economic data (tide coming in).

You can see this in the generally representative client account ‘client category target’ that roughly 65% of the account is targeted to stocks/equities (but only about a third is currently invested). The generally representative client account has probably had 30-45% invested in equities since early December and I expect to invest more into equities going forward. 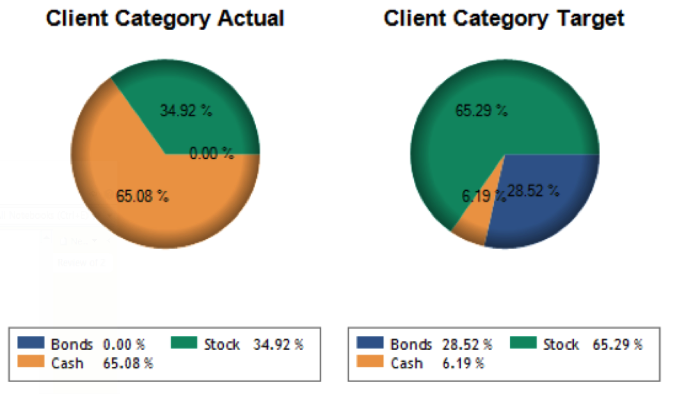 The election surge that topped out on December 9th has been drifting sideways since. There is a battle going on in equities (and there will be ups and downs), but the data continues to show a strengthening economy. It is possible that we will see a pullback in January, but if that happens I will be using it as a buying opportunity for stocks.