Send-Grid (SEND) is a $1.18B digital communications platform for companies looking to engage customers via email and trades 5.7X EV/Sales FY19.  SEND grew revenues 40% in 2017 and forecasts around 25% growth each of the next two years. Shares have trended higher since its debut and currently basing nicely above the $26 level.  SEND reported Q1 revenues +31% Y/Y and customers surpassed 69,000, rising 35%.  Email API revenues grew 30% while Marketing Campaigns grew 102% and now represent 17% of revenues.

SEND estimates a total addressable market for transactional and marketing emails of $11B in 2017.  SEND allows companies to deliver mass emails reliably and effectively in a way that traditional email providers cannot.  SEND’s email volume grew 29% Y/Y to 130.4 billion last quarter, and it has significant cross-sell opportunities for its Marketing Campaign offering.  SEND is fairly difficult to value as it is a niche play without a lot of great comparisons, but compared to other software peers growing at its rate valuation is fairly attractive.  The most intriguing part of SEND to me is its allure as a potential acquisition target if one of the larger email providers such as GMAIL or MS Outlook wanted to integrate its offerings.  I see shares modestly undervalued here with upside to $35 over 6-12 months and is more of a show-me story.

GreenSky (GSKY) is a $1.06B provider of an infrastructure platform to support the transaction life-cycle.  It is relatively unknown at this point with no Analyst coverage since coming public in May.  GSKY as 12K active merchants on its platform with 1.7M customers and $12B in cumulative transaction volume, the latter growing 31% Y/Y in 2017.  The company had revenues of $326M in 2017 with 100%+ dollar retention rates, so only trading around 3X 2017 EV/Sales.

GreenSky calls itself a leading tech company powering commerce at the point of sale with its platform facilitating merchant sales.  It sees a significant market opportunity with $315B in spending volume in 2017 in the home improvement market which has historically represented the majority of its transaction volume, and it also sees substantial opportunity in the elective healthcare market it entered in 2016. Transaction volume in Q1 2018 grew 47% Y/Y and active merchants jumped 52%.  GSKY is also a profitable company both on Net Income and Adjusted EBITDA measures.

A note on its market from its S1 Filing:  “From our inception through March 31, 2018, our Bank Partners have used our program to extend over $12 billion of financing, primarily including loans for home improvement sales and projects involving, among other things, windows, doors, roofing and siding; kitchen and bath remodeling; and heating, ventilation and air conditioning units. We believe that spending on home improvement goods and services will continue to increase as the national housing stock ages and existing home sales increase.”  “In 2016, we began expanding into elective healthcare, which, like the home improvement market, is a large, fragmented market featuring creditworthy consumers who make large-ticket purchases. We believe the elective healthcare market rivals in size the home improvement market in terms of annual spending volume, based on the number and cost of annual procedures performed. Elective healthcare providers include doctors, dentists, o utpatient surgery centers and clinics providing orthodontics, cosmetic and aesthetic dentistry, vision correction, bariatric surgery, cosmetic surgery, hair replacement, reproductive medicine, veterinary medicine and hearing aid devices. We believe that because of population aging, innovations in medical technology and ongoing healthcare cost inflation, we are well-positioned to increase volume in the growing elective healthcare industry vertical.”

GreenSky is evaluating entry into new verticals like online retail, power sports, auto repair, and jewelry.  GSKY solutions allow customers to avoid a lot of the hassle generally experienced with financing by using its platform at the point of sale.  A substantial part of its revenues are generated from upfront transaction fees every time a merchant facilitates a transaction and receives a payment via GKSY’s platform.  GSKY indicates consumers using its platform have super-prime or prime credit scores with a weighted average credit score for approved loans of 769.  My overall take is that GSKY appears to be an absolute bargain at a $1B market cap considering its impressive growth across all metrics and the opportunity to expand into new verticals.

The overall laser market, including semiconductor lasers and fiber lasers, was approximately $9.5 billion in 2015 and is expected to grow to approximately $14.4 billion by 2020 according to Strategies Unlimited. The semiconductor and fiber laser portion of the market addressing industrial, microfabrication, and aerospace and defense sectors was approximately $2.3 billion in 2015 and is expected to grow to approximately $4.2 billion by 2020. LASR global customers include Cincinnati Inc., DMG Mori and Suzhou Quick Laser Technology Co. in industrial, MKS Instruments and Samsung in microfabrication, and BAE and Raytheon in aerospace and defense.  Some of its notable competitors are IIVI, COHR, LITE, and IPGP.  LASR results are seeing increased profitability due to strong industrial demand and it tends to see demand trends align closely with US/China economic data.  Its vertical integration allows for strong margin leverage and it offers a pure play to the high growth fiber laser market.  IPGP is likely its closest peer and is forecasting 14% and 12% revenue growth the next two years while trading 6.9X FY19 EV/Sales, but its 55.9% gross margins are far superior.  My overall take is LASR is an emerging player in a hot industry and if it can show continued margin expansion to close the gap with IPGP while delivering more than 2X the revenue growth, it can be a very good 3-5 year investment. 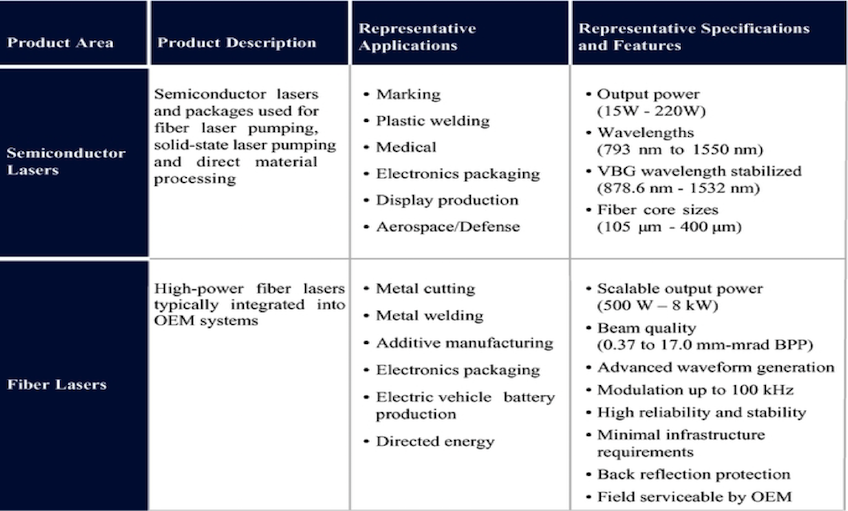 Bandwidth (BAND)is a $660M provider of cloud software-power communication platforms trading 3X EV/Sales FY19.  BAND is not as “sexy” of a growth play as these other names with just 7% revenue growth last year but 19% seen this year and 13% next year. BAND recently reported Q1 numbers with revenues growing 34% Y/Y and a strong dollar-based net retention rate of 115%. It cited robust demand to embed voice, messaging and 911 into software applications.  Active CPaaS customers rose 26% Y/Y.  Its sophisticated and easy-to-use software APIs allow enterprises to enhance their products and services by incorporating advanced voice and text capabilities.

Bandwidth’s customers include Google Voice, Microsoft Office 365 Skype for Business, Dialpad, GoDaddy, Kipsu, Rover and ZipRecruiter, among many others.  The CPaaS market is large and rapidly growing. According to International Data Corporation (“IDC”), the global CPaaS market will be $8.2 billion in 2021.  The company indicates “Assuming our current market pricing, we estimate our addressable market of minutes of over-the-top VoIP calls and messages to be $3.3 billion for those services in 2017 and $6.2 billion in 2021, a compound annual growth rate of 17%. Market growth will be driven by enterprise demand for cloud applications and the need to integrate communications services into any workflow, customer-facing application or business process.”  BAND also sees “new use cases” as a potential large area for growth of its products. BAND lists its competitors as other CPaaS companies like Nexmo and TWLO.  TWLO is trading 7.6X FY19 EV/Sales but is also seeing much stronger growth numbers.  BAND’s CPaaS offering are seeing accelerated growth that could close the valuation gap, or at least see shares trade 4.5X which would be 50% higher.

BAND is uniquely positioned versus others as it owns the underlying IP network and software platform offering a competitive advantage in one-stop shopping.  There have also been a few buyouts in the group with Mitel (MITL) recently going private and Cisco buying Broadsoft.  Other cloud communication names like Ring-Central (RNG) and Five9 (FIVN) have also been seen as buyout targets for Amazon/Oracle.  My overall take on BAND is it appears far too cheap at 3X EV/Sales and its $660M market cap could make it an attractive M&A target with it showing clear momentum in its key business metrics while operating in a strong growth industry.

The author has a long position in CBLK at the time of publication.  Any opinions expressed herein are solely those of the author, and do not in any way represent the views or opinions of any other person or entity.