The equity markets surged last week propelling the S&P 500 and Dow Industrials within less than 2.0% of new all-time record highs.

The rally was supported by improving economic data. New home sales and contracts on existing homes soared last month. This is considered important given the ripple effect on consumer spending that a surge in housing activity generates. Improving conditions were not lost on Federal Reserve Chief Janet Yellen as her remarks last week were decidedly more hawkish suggesting all things remaining equal a Fed rate hike was likely in the months ahead.

Investors view a Fed rate hike as a positive sign that the Federal Reserve believes economic growth and improved corporate earnings in the second half of the year are likely. The fact that stocks rallied following Janet Yellen’s remarks indicates that a rise in interest rates is already priced into the stock market. 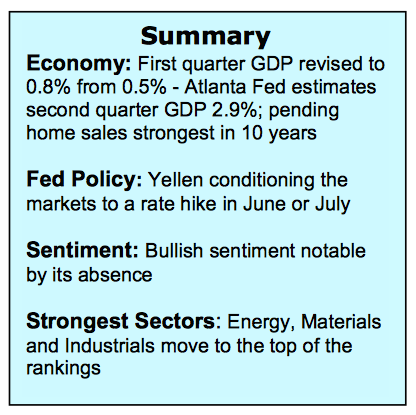 The largest hurdle for stocks the past two years has been excessive valuations. This has helped create a cautious and by some measures fearful mood among investors, which is unusual with stocks trading close to record highs. Nevertheless, investors have been fleeing mutual funds and ETFs and accumulating bonds. It is estimated that more than $17 billion flowed out of traditional ETFs in May with a similar outflow from stock mutual funds. Contrast that to the year-to-date inflows into bond ETFs of $37 billion.

The weight of the technical indicators continues to argue that the path of least resistance for stocks is to the upside. Despite several weeks of persistent selling in May, the popular averages suffered little damage and are poised to break out of a short-term trading range that has been going on for months. The performance by the broad stock market also supports the prospects for higher prices with 60% of NYSE issues trading above their 10- and 30-week moving averages.

Last week, the percentage of S&P 500 industry groups trading in defined uptrends expanded to 61% from 58%, a move above 65% would likely trigger a buy signal. Measures of investor sentiment show an unusual propensity to be bearish toward the stock market. The latest survey from the American Association of Individual Investors (AAII) shows only 17.5% bulls, which is the fewest bulls in more than 10 years. The AAII survey is admittedly a small sample but the uneasiness toward equities can also be seen by reports from the options exchanges that show a surge in put buying in the month of May (put buyers anticipate lower prices). In addition, the most recent report from Investors Intelligence (II), which tracks the opinion of Wall Street letter writers shows only 35% bulls, down from 47% in March and April. Typically at a market peak, the advisors are near universally bullish toward stocks. The sentiment indicators suggest that near term, there could be more risk to being out of the stock market than being in the stock market. 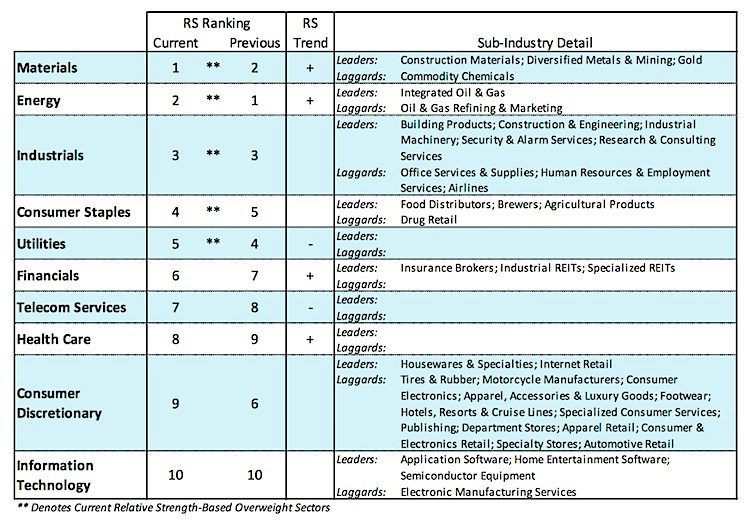