The chart and data that follow highlight non-commercial commodity futures trading positions as of August 14, 2018. This data was released with the August 17, 2018 COT Report (Commitment of Traders).

Note that this chart also appeared on my blog.

The chart below looks at non-commercial futures trading positions for WTI Crude Oil futures. For the week, the spot Crude Oil finished down -3.6%, while the United State Oil ETF (NYSEARCA: USO) closed down -2.8%.

Crude Oil has struggled to firm up due to continued US Dollar strength. But it’s oversold and the 200 day moving average is holding as support. 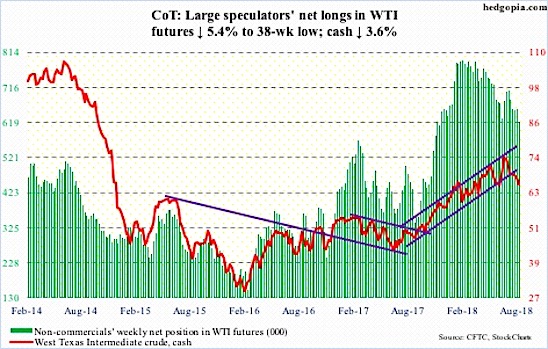 A couple weeks back, spot WTI crude oil slightly broke below a rising trend line from June 2017  This past week, the underside of that trend line thwarted rallies (resistance). Crude also lost support around $67 and tested the 200-day moving average (its first test since last October). It’s holding thus far.

As well, Crude oil is oversold near-term – so there’s room for a rally, perhaps up to resistance at $69-69.50. Bears will be watching. Note the rising trend line support from February 2016 which lies around $56.  That was when WTI bottomed at $26.05.