Growth in U.S. corporate profits with inventory valuation and capital consumption adjustments dipped into the negative territory in 3Q15 – both quarter-over-quarter and year-over-year.

This is also the first time since 2008 that profits are on course to dropping in 2015 –  be it operating earnings of S&P 500 companies or corporate profits measured by the BEA’s national income and product accounts. 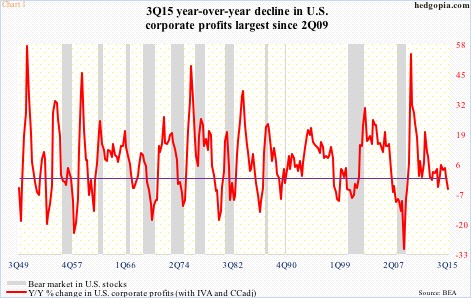 In chart 2 below, for 2015, consensus estimates of $106.80 for S&P 500 companies have been used, while for corporate profits 3Q15 numbers have been used. It is possible when it is all said and done, 4Q15 will look a whole lot different from 3Q15, but the trend is in definite deceleration. 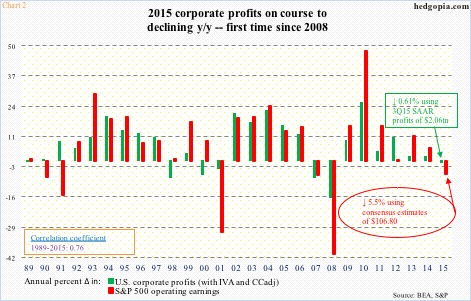 NIPA’s corporate profits have declined 4.7 percent since the 3Q14 peak. Similarly, the four-quarter rolling total of operating earnings of S&P 500 companies peaked in that same quarter at $114.51. Four quarters later, in 3Q15, they were $104.15.

Chart 3 also shows a close relationship between earnings trend and the S&P 500 index. The green line seems to be trending lower in keeping with earnings deceleration. But the chart uses quarter-end price (1920.03). If we use yesterday’s price for the S&P 500, the green line will have completely diverged from the red bars. 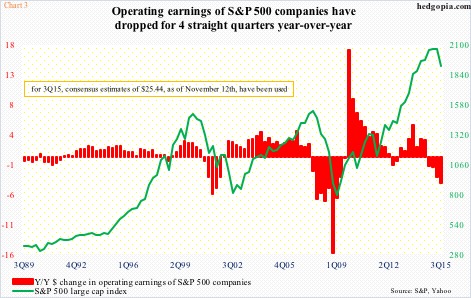 Hence the question, what exactly is the message coming out of the S&P 500?

If stocks are telling us that the economy is all set to accelerate next year, that oil stabilizes here and that the dollar begins to weaken, then a case can be made that corporate earnings can improve next year. But how likely is that?