The British Pound has fell nicely away from the resistance level we charted here seven months ago.

Now that we are starting to see a bounce in the wake of the failed Brexit vote, it’s time to reassess the Elliott wave downward trend and look for the areas where the next opportunities await.

Here we show the next leg of the forecast in the context of the CurrencyShares British Pound Sterling Trust (NYSEARCA: FXB).

We still believe the Pound ETF (FXB) is tracing a five-wave decline from its 2014 high, with the more recent high in summer 2018 representing wave [iv] of that Elliott wave sequence. The implication is that the decline from last April also should consist of five waves on a smaller scale, which will be labeled eventually as (i)-(ii)-(iii)-(iv)-(v) counting downward from [iv].

The decline from summer into autumn was so steady that it should be considered as a single move – wave (i) in the expected five-wave decline.

With that wave apparently complete in mid-August 2018, we are now watching for corrective wave (ii) to finish its consolidation as a prelude to another strong decline in wave (iii). 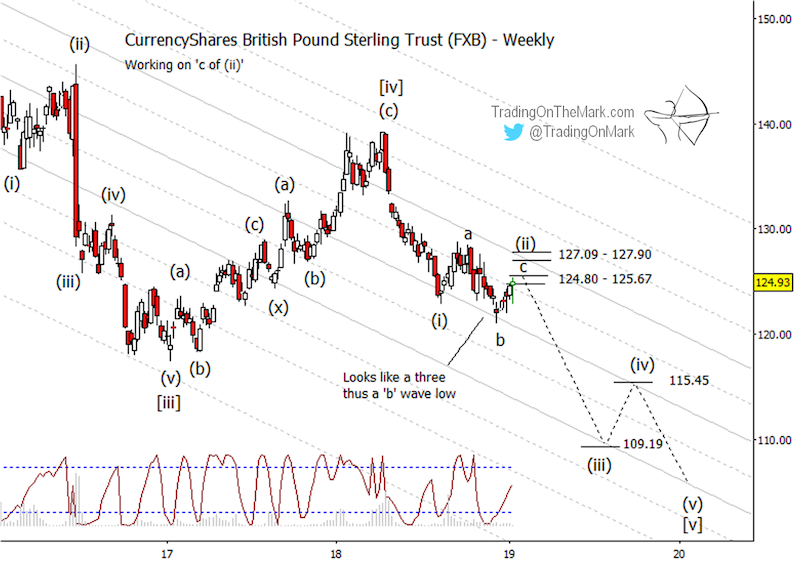 Once the decline resumes, an approximate initial target for wave (iii) lies near 109.19 based on a Fibonacci extension measurement. We probably will be able to refine that target after it is clear that wave (ii) is complete.