Black Friday has come and gone this November with consumers continuing to spend overall. The National Retail Federation claims that nearly 154 million consumers opened up their wallets per Black Friday spending data.

Keep in mind the US election saw about 130 million voters turnout. Seems like people may care more about their Apple iPads than the president.

Not surprisingly Black Friday spending data shows that the online shopper outpaced the brick and mortar buyer, with 75% of buyers shopping on Black Friday itself.  Adobe (NASDAQ:ADBE) reported that of the $5 billion spent online during the holiday weekend, that $1.2 billion of it was on mobile devices, which was a record. For insight into what consumers were buying as they may relate to the companies you/we own, Adobe disclosed that the most popular purchase items were gadgets like Apple iPads (NASDAQ:AAPL) and Samsung 4K television sets.

What could be driving this?

Long ago I made a claim that oil prices falling would be a boost to the US economy 12-18 months after (this turned true). While oil can be a boost when falling, it can also become a headwind for consumer spending year over year. (see chart below)

My take is that oil prices rising off the lows were the main culprit for flat to lower spending per person this year. Looking back from November 2013 to November 2014 we witnessed an oil collapse of -28%. That Black Friday (2014) we saw the average spend per person jump 20.4%. Similarly, over the last 12 months oil prices have risen by 10.43%, therefore it should be of no surprise that spending per person dropped -9.49% this Black Friday.

So our simple take is this: 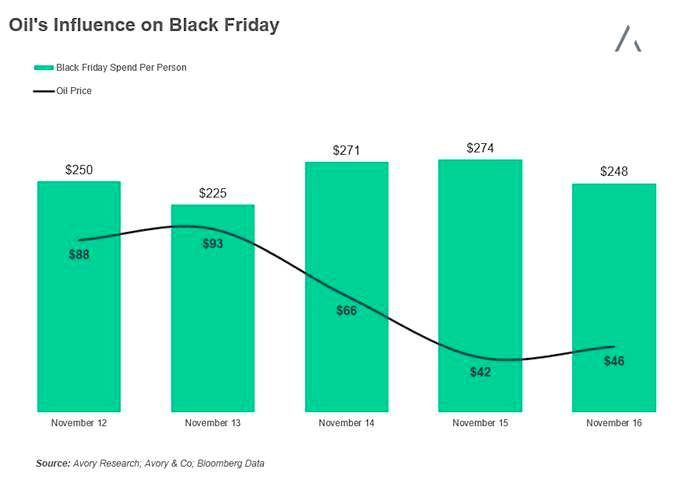