The bull market in U.S. stocks is 8 years old.

Table 1 is courtesy of Howard Silverblatt of S&P Dow Jones Indices, whose regular updates are a treasure trove of information. 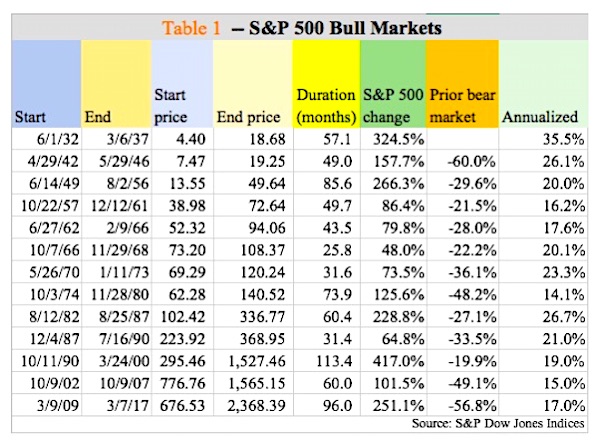 Thirteen bull markets going back to 1932 have been listed in the table. Duration-wise, at 96 months the current one is the second longest, but in terms of performance it is the fourth most profitable. Annualized, hence, current performance fares poorly – only outperforming three others (’57-’61, ’74-’80, and ’02-’07).

But the dogged persistence shown by this bull market during which the S&P 500 more than tripled deserves a lot of praise. The combined market cap of the index went from $5.8 trillion in March 2009 to north of $20 trillion. Multiple expansion helped.  Big time!

Things look better using forward P/E – 18.1x on ’17 earnings and 16x on ’18. The reason for the wide discrepancy between trailing and forward is because the latter remains elevated, which, given the prevailing downward revision trend, is hard to trust.

From the valuation perspective, the problem is not just on the bottom line, but the top line as well. 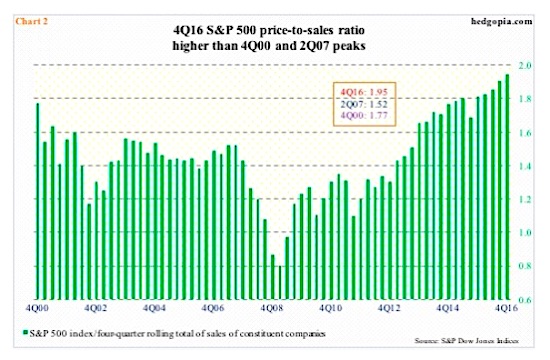 Something else happened last November. Bulls defended the rising trend line from the afore-mentioned low in March 2009.

That trend line has been tested several times – most prominently in January/February last year. In the early weeks of 2016, stocks seemed to be unraveling, as the S&P 500 lost nearly 13 percent in three weeks, later bottoming on February 11 – an important low. See chart below. 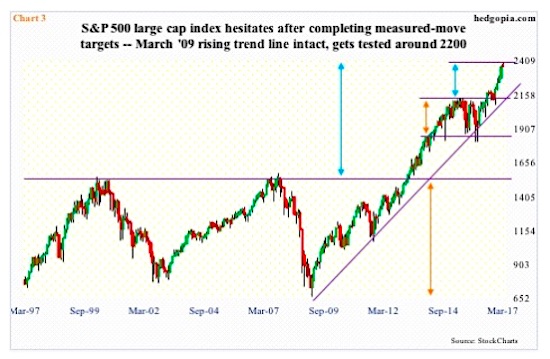 Will the trend line be tested in the near future?  Too soon to tell. The S&P 500 has come under slight pressure since gapping up on March 1 to a new intraday high of 2400.98. The index is retreating after fulfilling not one but two measured-move targets.  The trend line does not get tested until around 2200, which is another seven percent. That is a lot of cushion for the bulls to work with. If they manage to save it, Charts 1 and 2 – no matter how extended – probably stay that way.

Get more research and ideas from my website hedgopia.