Last year was so much fun that investors thought they’d start out 2015 the same way… with hopes of getting the same result into Spring. To recap: Start the year with a really crappy January, and follow it up with an awesome February. And that has given way to thoughts of positive seasonality into May. Will it really be that easy?

To a certain extent, active investors shouldn’t fight that type of setup. It’s always easier trading (swimming) with the trend. BUT it’s our job not to get complacent. So I tweeted some thoughts about the stock market’s runup following another record close for the S&P 500 (SPX) on March 2nd.

So my trading lens isn’t seeing a good risk-reward setup on a macro level (over the near-term). But trust me, I’ll be trading… nimbly;) — Andy Nyquist (@andrewnyquist) March 3, 2015

The tweets were less about calling a tradable “top” than simply pointing out that my near-term indicators were telling me to be nimble and and to pick my spots carefully. In short, markets had moved too quickly and sentiment was ticking higher – AAII percent bulls ticked higher into late February and the NAAIM Exposure Index hit 99 on 2/25 and 92 on 3/4. In short, my very near-term risk-reward was skewed to the downside and a stock market pullback seemed in line.

And that’s exactly what we’ve seen. Since last Monday’s record close, the S&P 500 is down 2.2%. That’s not much in the scheme of things, but when trading major ETFs, e-mini contracts, options, or individual stocks (higher beta), it’s important to our P&L.

So what am I looking at now?

Well, it’s pretty much all “technical” this week. The pullback has now fallen into the typical 2 to 5 percent garden variety range for the bull market, so a reversal wouldn’t be unexpected this week. But we need to make the market prove itself.

A convergence of key support levels come into play on the S&P 500 around 2062/2066. That level is marks the January to early February range tops, the 50 day moving average, and the .382 Fibonacci retracement of the Feb 2 low to Feb 25 high. If the markets breach that level in a meaningful way, we could dip down to fill the February 3 open gap at 2020, or even retrace down to 2000 level (2005 marks the .382 Fibonacci retracement of the October lows to February highs. 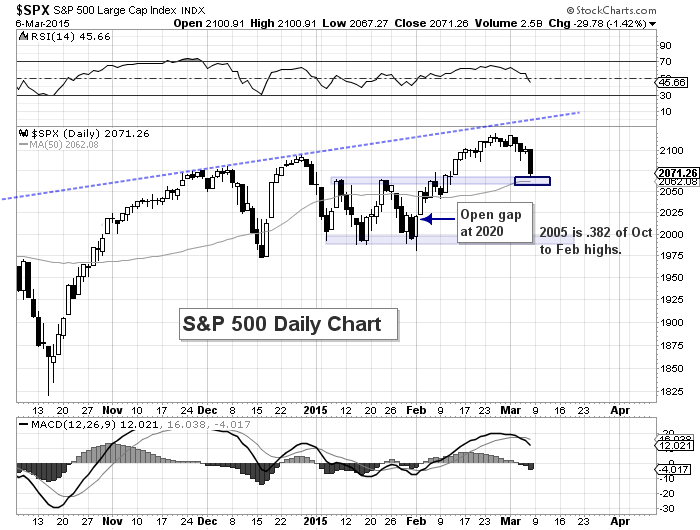 Have a good week and thanks for reading.