The Dog Days of summer are here and this typically is a time when most of Wall Street goes on vacation. That may be why the movements in the stock market (and other markets) have been so small. Over the past 6 weeks the S&P 500 Index (INDEXSP:.INX) is up just 0.4%.  Natural pullbacks in leaders like defensive stocks have played out through time.

The market is also in the process of digesting the words of Central Planning God’s (insert sarcasm) such as Janet Yellen (Friday) and others from Saturday. Will their collective words be interpreted as hawkish or dovish?

Or the better question is whether it matters!

That last time she went hawkish in the face of slowing growth she had to quickly reverse herself. Since I believe the economy is still slowing down, there is a high probability that a hawkish tone will not be greeted well. The Fed isn’t irrelevant, but it does seem that their impact on the financial markets is lessening. Could it be because they have lost credibility?

For example, the Atlanta Federal Reserve’s GDPNOW tracker is predicting 3.6% US GDP for the third quarter of 2016. Does anyone really think that our economy is growing at 3.6%? The research firm I use (which has a much better track record on US GDP) is expecting a Q3 US GDP number that starts with the number 1 (as in 1.?%). That’s a significant decline from what the GDPNOW tracker is predicting. The Fed has historically been off on their estimates by several basis points.

What does all this mean?

More of the same. As I’ve said before, the key to making money in stocks is to buy low and sell high. The US Stock market remains near all-time highs. So based on that, is it time to buy more stocks at the all-time highs? I don’t think so. Perhaps defensive stocks, but not so much high beta stocks.

So what should we do? Well, to be fair, not all stocks are at all-time highs. For instance, defensive stocks like utilities (NYSEARCA:XLU) tend to be down when the growth stocks are up; they are counter-cyclical. So if the probability of US stocks declining is greater than 66% it may be that investing in utility stocks is a good move here. I have purchased some individual utility stocks and may be buying more depending on the price action and setups. 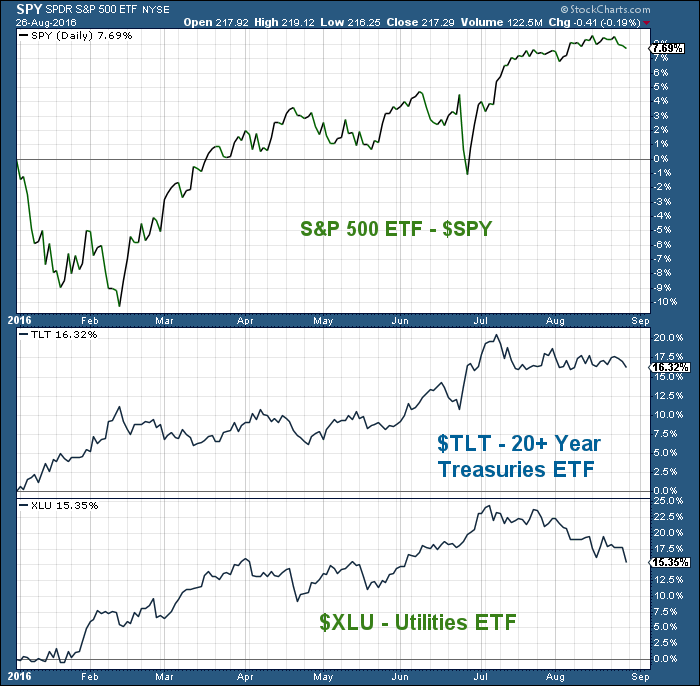 There is another theme that I am looking at in more detail as well–politics. I think just about everyone is dissatisfied with the choices we have before us this November. From a policy perspective, though, they both seem to be anxious to significantly expand fiscal spending. They both are talking about raising the deficit by borrowing and  spending hundreds of billions (if not trillion!) to rebuild our country’s infrastructure.  Whether it is building a wall or replacing bridges and repairing highways and sewer systems, that is a lot of money that will flow into the economy. And Congress appears to be willing to allow it to happen.

What is the possible outcome of massive stimulus like that?

First, it is going to massively expand our nation’s debt. Typically, that could result in bond yields going  up (that would hurt our bond positions), but what we’ve seen happening in other countries around the world is that the OPPOSITE happens. Every time a government or Central Banker announces a new ‘stimulus’ program the yields on that governments’debt actually go down. I think it is because the very act of needing stimulus is essentially telegraphing that the economy is in trouble and that they are so scared that they are willing to do almost anything to prevent further erosion. And yet, in country and country around the world that economic erosion has continued. The core underlying problem is a failed philosophy.

Their basic philosophy is to devalue their country’s currency in hopes of attracting buyers from other countries. In order to do that, though, they end up hurting their own citizens because when they devalue their currency, everything becomes more expensive for their people. Think about it, if the value of the USD goes down, the price of gasoline, food, housing, etc. all goes up. Unfortunately, your wages/income aren’t going up  so you end up getting pinched. In the end, a weak-dollar policy hurt’s the American people and (based on what has happened in other countries) the bond yields will go down.

So I continue to expect to see bond positions outperform over the next 6-12 months. I continue to favor defensive stocks like utilities. As well, I still like gold. Lastly, if it appears that the massive fiscal infrastructure stimulus is going to happen then you may see me buying some material/construction/steel-type stocks.

There are still opportunities out there in the midst of a slow-growth environment, but the strategy in this type of market needs to be based on selling high and buying low. And from a big-picture perspective, since the economy is slowing we are remaining in a defensive posture where the focus is on preservation, then growth.