By Andrew Kassen A lot of atrocious developments occur in world financial markets while the West sleeps.  Lately, that has meant mayhem in Japanese markets.

What was that all about? Was the snap down was in response to House Speaker Boehner’s thrice-fold repetition of the phrase “Progress Fiscal Cliff No” (that’s a verbatim; and moreover the extent of the transcript) during his 17-second press conference held in that window?  No, that was 12/19/2012.  On the day in question, Boehner failed to generate sufficient support to bring his Fiscal Cliff Plan B to the House floor.

No matter: the next morning the 50 point drop had receded to a mere 17, the financial media strikingly oblivious; and the S&P some 9% higher 3.5 months later.

Over the past week, Japanese markets – after America pops its Ambien, but before the resulting car crashes – have behaved in similar fashion in the violent wake of the Bank of Japan’s rollout of a much-ramped up and revivified QE program.

The official, albeit preliminary verdict regarding the “bold” and “unprecedented” policy resolve of the Kuroda-led BOJ to pry the Japan out of its multi-decade deflationary morass is near-universal approbation.  Following the Fed’s lead in almost every way, under uber-dovish Governor Kuroda’s leadership the Bank of Japan has introduced “qualitative” and “quantitative” measures that will result in a doubling of Japan’s monetary base in 20 months.

Some Japanese market highlights since 11/15/12:

Much of that occurred not only while you were sleeping, but in anticipation (compare the 11/15/12 inflection point date with the BOJ announcement only on 04/04/13) of an announcement of monetary policy changes.

Stating the obvious: Japanese stocks are skyrocketing (forgetting for a moment the great height the Nikkei toppled from so many years ago), the Yen is “suffering” aggressive debasement (i.e. “Kuroda’d” – try saying it out loud), and benchmark Japanese yields are flailing in currency-expatriated paroxysms of sovereign debt ecstasy that may have more than one overextended operator stepping off the proverbial ledge. 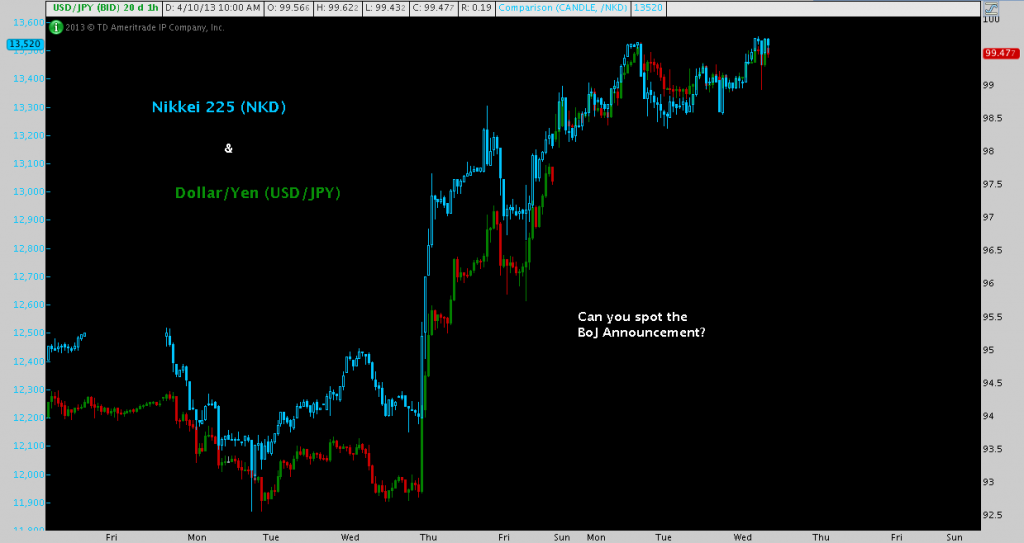 In fact, Japan’s 10 year note has been halted in 3 of the last 4 sessions – something that hasn’t occurred since sovereign debt markets were held in thrall to the post-Lehman mayhem of Fall 2008.

The closing statistics above omit the intrasession violence traders have perpetrated on one another: for example, last Thursday into Friday (ET), the 10Y JGB opened lower at 0.45%, dropped to 0.315% (blowing past the June 2003 record low at 0.4%), before rocketing to 0.62% (in the same session!) – only to settle at 0.53%. Consider for a moment what hypothetical conditions would have to prevail for moves of a comparable magnitude to occur in US Treasuries.  Now consider that this is happening in the 3rd largest economy in the world.

Whether you actively trade currencies or view this as a passing curiosity in your management of a vanilla stock/bond portfolio, events in Japan are prompting global shifts in risk and sentiment about which you ought to be aware.

If that’s the case: is there legitimate reason for alarm, or are these numbers mostly a basis for sensationalism?

Both. Japanese markets and those internationally (e.g. funds) with significant exposure are rebalancing, rehedging and otherwise reallocating in response to a widely-forecasted but massively dislocative macro event. This will level out: yields will “normalize” and probably the daily farce that is prompting bond market trading halts will pass out of view.

But, more enduring changes are occurring. The “accidental” desolation of the Yen has already resulted in a beneficial stimulation of export activity. The BOJ’s race to debase and obsession to inflate embarrasses the Fed and ECB in its ardency, resulting in across-the-board expatriation flows as capital floods from Yen-denominated assets toward fairer risk-free climes such as US Treasuries, German Bunds and UK Gilts, bidding up the USD, Euro and Pound Sterling as a result. Speculative capital is finding a new home as well, as currency risk prompts short JPY hedges and a resuscitation of the Yen carry trade that pushes money out of the safe haven that is the Yen, into countries with higher yielding currencies and their corporate debt, real estate and equity markets.