Once a year, Gallup conducts a poll that provides some insight into the sustainability of the bull market in stocks. The concept of an investment bubble implies irrational investor confidence.

Therefore, if skepticism and fear were near all-time, bubble-like lows, we would expect a very high percentage of U.S. households to be in the stock market, as was the case near the euphoric 2007 stock market peak (see graph below). 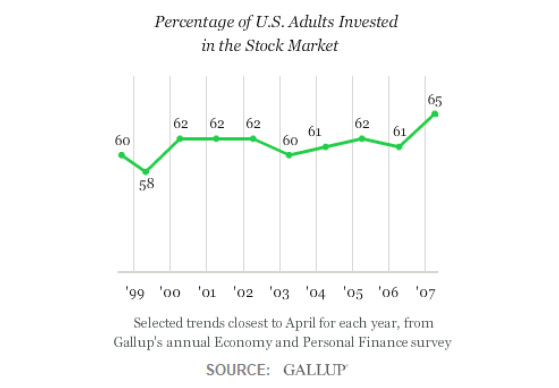 2007 peaked with 65 percent of adults invested in the stock market, reflecting a bubble-like investor climate.

Are We Back To Bubble Territory In 2017?

Therefore, it would be helpful to know if stock ownership figures are back near the bubble-like 2007 levels in 2017. From Gallup:

If the stock market had a chance to go on a surprising multiple-year run from present levels, we would expect a healthy dose of skepticism and a significant amount of people not yet participating, which is exactly what the Gallup numbers tell us. We would also expect long-term set-ups in the market to be similar to multiple-year bullish set-ups in the past. This week’s video explores annual charts to better understand the long-term outlook for stocks.

Many Investors Remain On The Sidelines

“The stock market lost more than half of its value during the bear market that coincided with the Great Recession and 2008 financial crisis, with many investors responding by taking their money out of the market.” 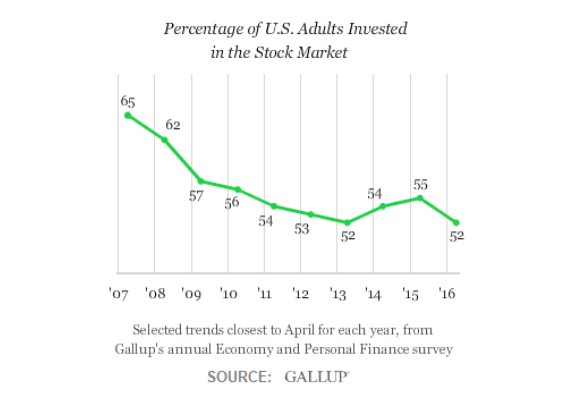 Stock Market Swings Up and Down With Stimulus News