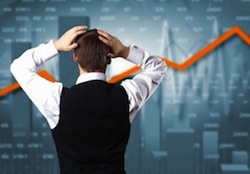 By Andrew Kassen One of the more insightful adages of homespun trader wisdom goes something like this: Markets will generally pursue that course which frustrates the greatest number of participants. At first glance, fewer charts out there right now fly in the face of that aphorism more than USDJPY.

As the de facto field test environment of the Bank of Japan’s (Yenkuza division) nuclear QE project (to say nothing of the Fed’s dilatory balance sheet/QE dalliances on the USD side), little seems more assured than a rising Dollar/Yen trade.

Why so?  In a nutshell, the BOJ is debasing the Japanese Yen (JPY), enabling the Yen carry trade and stimulating FX expatriation flows. That sets domestic money – and foreign money invested domestically – off in the search of higher yields abroad. With the promise of 2% inflation in 2 years and a doubling of the Japanese monetary base by the end of 2014, Japan’s central bank has effectively invited a massive selloff in native currency.

The BOJ’s intent may well be realized in 20 months, with a bombed-out Yen sitting at USD/JPY 150 by the end.

But even an aggressive – though inadvertently executed, if we’re to believe BOJ governor Kuroda’s protestations to the contrary and ignore US Treasury Secretary Jack Lew’s and the G-20’s not-so-veiled admonitions – race to debase doesn’t proceed from start to finish in a perfectly straight line.

The trade of max egalitarian frustration in the world of Forex right now? USDJPY weakness. As you can see from the latest Commitment of Traders data, while “off the lows” seen in late March the tilt among large speculators(e.g. hedge funds) remains highly negative, signifying a decisively long USDJPY bias (click image to zoom): 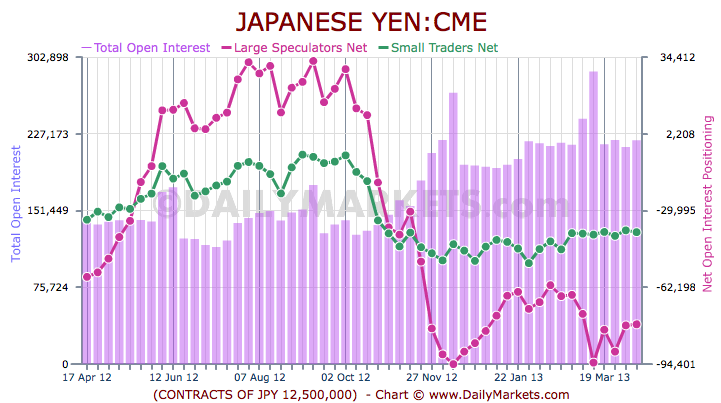 When Kuroda unveiled “Unprecedented QE” on 04/04/13, USDJPY sat at 92.85. By the time Asia opened the following Sunday night (04/07/13), the pair had advanced (culminating in an opening gap up) to 98.20. After a brief, plodding mark-up higher, running ever-so-close to USDJPY 100, Yen strength turned resurgent in a swift drop to 96 by Monday evening past.

Since then, USD/JPY has been attempting to push above gap resistance at 98.20, thus far in vain. The result of this week’s grind back from 96? A corrective rising wedge (click image to zoom): 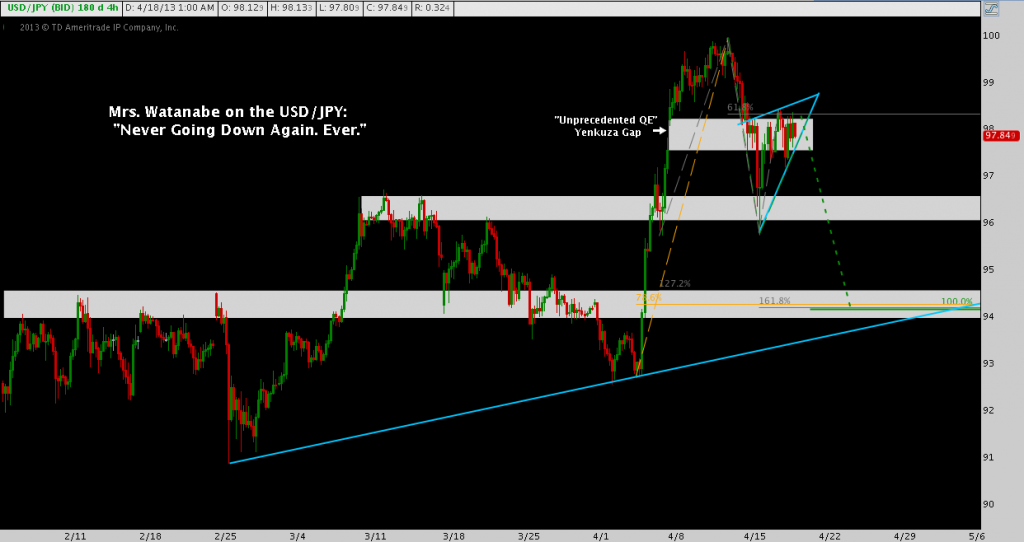 What does the rule of maximum frustration dictate from here? None other than a breakdown from the wedge in a bearish ABCD, through support at 96 to rising trend line support at 94.

Here’s a much closer view of the possible measured move down (click image to zoom): 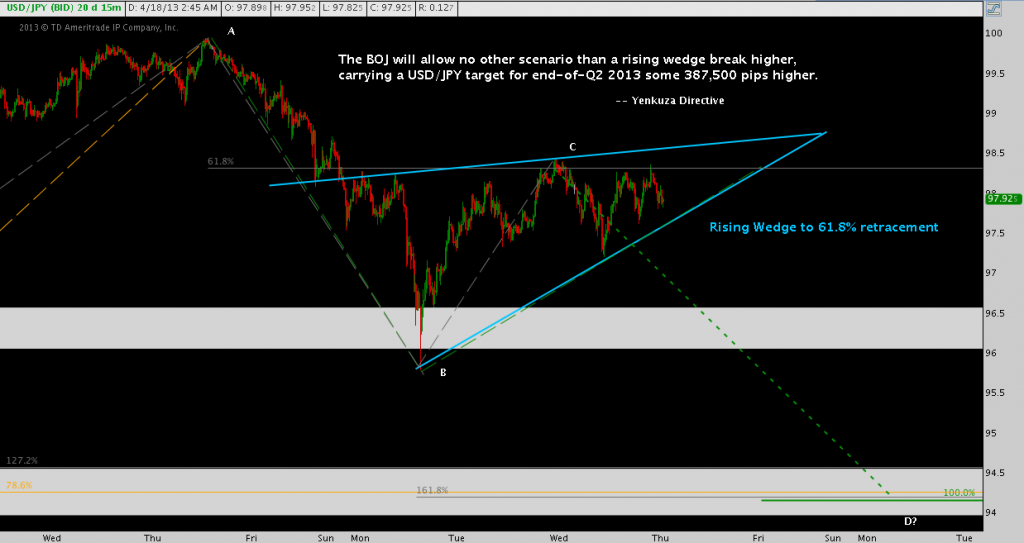 In light of the indomitable offer on the Yen created by BOJ monetary policy, the market is heavily positioned short. In the end, the Bank of Japan may get what it want (…or it could bring about an absolute collapse), with the current large spec positioning vindicated. A short-term, counter-trend “trade of maximum frustration” doesn’t contradict these overwhelming market forces. But with the boat so heavily weighed down on one side in USDJPY, it could exploit their certainty by way of a pullback that extends just far enough to surprise everyone, yet again.

*Note: The “Yenkuza Directive” is a fabrication (but, hey: “Yenkuza” – funny, what?) and should not be construed as investment advice or a forecast of USD/JPY +387,500 pips in 2.5 months

Author holds no position in the securities mentioned at the time of publication.