Stocks continue to show strength as investors jump in on the bandwagon. Investor sentiment is getting frothy here as participants continue to jump on board. Let’s see what this week holds.

The S&P 500 moved higher last week, rising by 1.1%. This week may prove to be a bit bumpier… or at least see some selling resistance.

Yet our projection for the stock market is for a move lower into early January, as the current intermediate market cycle ends. 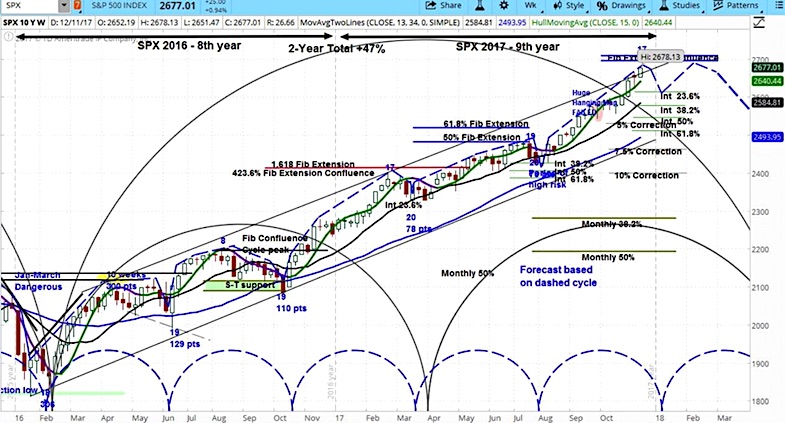 On Tuesday evening, Democrat Doug Jones defeated Republican Roy Moore in the Alabama special election to fill the Senate seat vacated by Attorney General Jeff Sessions. The markets initially dipped but then recovered and moved even higher on Wednesday as core inflation came in lighter than expected at 1.7%. The Federal Reserve later raised its benchmark interest rate from 1.25% to 1.5%.

On Thursday, the Department of Labor announced that retail sales rose 0.8% in November and that weekly claims for state unemployment benefits dipped. However, markets moved lower after Macro Rubio threatened to vote against the Republican tax plan. On Friday, the market pushed to new all-time highs after Republicans indicated that they would address Rubio’s concerns related to the child tax credit.

The SPX chart above covers a two-year timeframe using weekly bars. If you haven’t yet seen our show “askSlim Market Week,” then this week’s episode is a good one to start with as the analysis goes a bit deeper. See below for more information. As we will take some time off for the holidays, this week’s projection is for a longer period.

We expect a modest move lower into the beginning of January for the SPX. Looking at the chart, you can see the dips, which correspond with the blue dashed half circles at the bottom. These intermediate market cycles usually last 19 or 20 weeks. As we are at week 17 in the current cycle, the forthcoming dip will likely be modest.

For a detailed look at cycle analysis for a broader selection of futures, watch the askSlim Market Week every Friday afternoon.