We’ve all be witnessing incredible selling pressure on financial markets all over the world, with new multi-year lows showing up in equities and various asset classes. After years of relentless bull market action, we’re seeing a substantial change in the way that markets behave. Given that corrections are a normal part of market dynamics and trends, there is something to be said regarding the circumstances surrounding the recent price action.

The one question that many investors have been asking as of late is how did equity markets become so closely correlated with the price of crude oil?  Enter Sovereign Wealth Funds into the picture.

We know that the price of oil effects manufacturing, the job market, currencies, transports, etc. We also know that all of these things can have an impact on markets, but in the last 9 months, equity prices and oil prices have been tightly correlated, sparking curiosity in many market participants. I will attempt to provide one of the scenarios that may be responsible for the recent correlation between the equity market and oil prices.

There has been some recent speculation regarding large sovereign wealth funds (SWF’s) heavily liquidating assets. If true, it’s not difficult to imagine which ones are doing the selling. Those representing oil producing countries, which are funded by revenues from oil and gas sales, are likely shedding positions, especially riskier ones, to make up for lost revenue from energy.

Let’s take a look at a few reasons why sovereign wealth funds from oil exporting countries may be disbursing assets.

First, what exactly are sovereign wealth funds?  They are state owned investment funds investing in a vast array of assets, from stocks to bonds, currencies to real estate to precious metals, etc.

While Sovereign Wealth Funds invest in a range of financial assets, they all naturally have the objective of maximizing the long-term return from their investments. Although the portfolios of SWF’s are generally well diversified, the chart below shows the important role played by their exposure to oil and gas related assets.

The drop in the price of oil, however, is now beginning to take its toll on those that benefitted from high energy prices over the years. Analysts at RBS calculate that the boom years brought in roughly $700-800 billion to oil producing countries, much of which was being reinvested in global financial markets, much of which in equities. The current slide in oil prices, however, has reduced those revenues to roughly $200-300 billion. The plunge in the price of oil has not only hit U.S. shale plants, but has also rocked global markets, which are witnessing a drying up of liquidity compared to recent years.

As you can see from the table above, the amount of assets amassed by SWF’s is truly extraordinary, and the hundreds of billions of dollars they’ve been pouring into equity markets are being slowly curtailed due to tumbling oil prices. With crude hitting twelve year lows in the last two months, the inflow of liquidity deriving from oil and gas sales by producer nations into equity markets has dried up and the markets are feeling the effects.

As of March 2015, global SWF’s amassed $7.1 trillion in assets under management, according to the Sovereign Wealth Fund Institute (SWFI), up from $3.4 trillion at the start of 2008. Of total assets around the world, an estimated $4.29 trillion came from oil and gas SWF’s which are funded, as mentioned before, by revenues from energy exports. These types of funds are designed to act as a buffer to oil price volatility, as currently seen in markets, but has it worked? 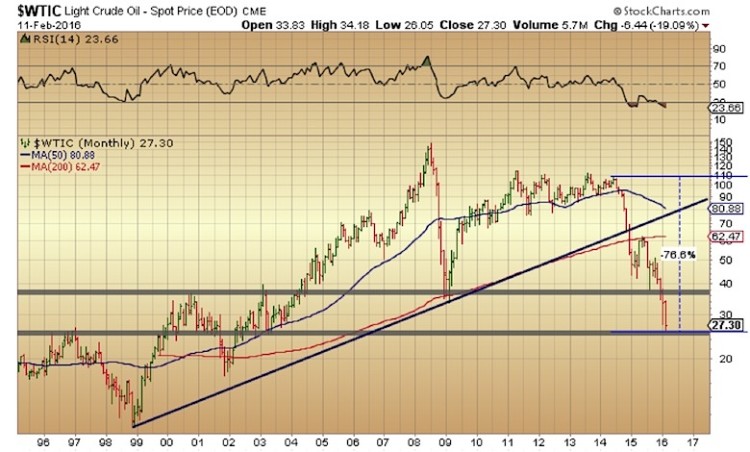 The 76% drop in crude oil prices in 2014-15 has created several problems for energy exporting nations. Many here in the United States have been expressing concern on the effects on our fracking infrastructure, and rightly so. They sustain that the larger OPEC countries are purposely refusing to cut output so as to maintain the oil glut and keep prices suppressed.

The consequent tumbling in oil prices does indeed create major problems for American energy production, hindering it from providing competition on international markets. As mentioned before, major oil producers are also taking a hit from current price action.

Let’s take Saudi Arabia as an example. The Saudi’s have refused to cut production several times in the last 18 months. They too, however, are feeling the pinch of its alleged orchestration in keeping oil prices depressed. While the effects are by no means devastating, Saudi Arabia’s current public finances are expected to show an $87 billion deficit after years and years of generous surpluses.

In order to cover that hole, the Saudis will be forced to sell debt, liquidate assets and effect privatizations. The process started in 2015 when Saudi Arabia’s foreign currency reserves fell by $73 billion due to major asset liquidation from one of its sovereign wealth funds, Sama Foreign Holdings.

It’s the size of these SWF’s that makes them so dangerous to market stability. While a disbursement of a few hundred million dollars may be capable of hitting an individual stock, especially one with low liquidity, it’s not enough to cause a meaningful impact on general markets.

With total current assets estimated at $4.8 trillion, however, it’s not hard to imagine how liquidation by these funds can rock markets in a big way. Think about it: a mere 6% reduction in such assets equals $288 billion in outflows from international equity markets! Now that can, indeed, provide a very substantial hit.

When turmoil like the one we’re now experiencing hits financial markets, there can never be simply one reason, and this case is no exception. We currently have an alarming plethora of factors causing the current downturn, from China’s numerous woes to the tumbling price of oil, from the emerging market debt crisis to global deflationary pressures, from the growing absence of liquidity to a worldwide economic growth slowdown and, last but not least, ZIRP (zero interest rate policy) and NIRP (negative interest rate policy) being implemented by many major central banks in the wake of a global currency war scenario.

That being said, there is a very specific and implosive effect caused by the drop in oil prices for countries that produce and export it. While the shedding of positions on behalf of sovereign wealth funds adds to many other factors mentioned above, the liquidating of assets by such enormous funds can, by itself, move markets in ways that were unimaginable before the SWF’s of oil producing nations grew into the behemoths they have become today.

This is not to say that sovereign wealth funds are facing demise. Most of them have been diversifying over the last two years in an attempt to curb losses from the oil price slide, but the sell-off is nevertheless putting the hydro-carbon based pools of capital through a strenuous test, and equity markets along with them.

The unwinding of this situation will not be an overnight affair. While SWF’s have maintained exposure to fixed income asset classes and forex markets, it will likely take an extended period of oil price stability (and gradual price increases) to get the finances of energy producing countries back on track and their sovereign wealth funds to return to investing in equities at previous levels. One possible intermediate term result is international financial markets being subjected to prolonged periods of volatility until this process plays out.