The Russian stock market has been on a nice run of late but is hitting potential resistance – from several angles.

We’ve posted extensively about the good fortunes in the natural resource/commodity complex recently. Not only has this space been on a tear since the election, it has generally done very well since the beginning of the year. And this goes for commodities, commodity-related stocks and international markets with a heavy resource influence. Russia would certainly fall into this category, based both on its resource dependence as well as its performance this year.

Now I know we have posted a few times, most recently in August, on Russia’s MICEX Index attaining new all-time highs. That feat, however, is in large part due to the extensive depreciation in the Russian Ruble in recent years. Thus, the MICEX, denominated in Rubles, has seen its nominal value rise to all-time highs.

Russia is unique, however, in that they also list a major stock market index denominated in U.S. dollars. The Russian Trading System Index (INDEXVIE:RTX) consists of 50 stocks on the Moscow Stock Exchange and is calculated in Dollars. This fact puts value of this Russian Stock Market Index (RTSI) at more than 50% below its 2008 all-time high.

That said, like the rest of the commodity complex, the RTSI has had a terrific year. In fact, if you overlaid it on any of the resource-related charts that we’ve posted in the past month, it would look nearly identical. It is 70% above its January low and up some 10% since the U.S. election, despite the Dollar strength. However, like many of those resource charts, the RTSI is dealing with potential long-term trendline resistance. This example is a bit unique, though.

As readers know, we use both log scales and linear scales in our charting. We find them both to be relevant and, thus, useful at various times. In the case of the RTSI, both the log and linear charts appear relevant now as price is running into Russian stock market major resistance. That’s because, on both scales, the index is running into key 5-year Down trendlines – just in different ways. 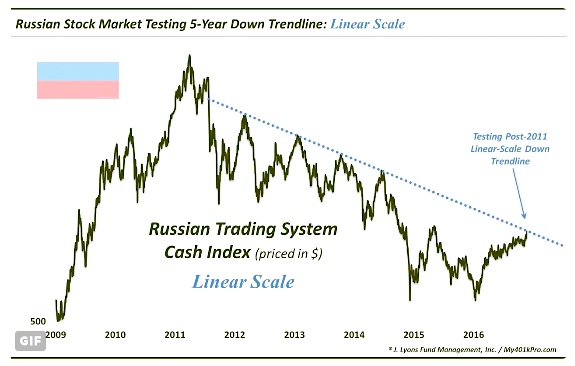 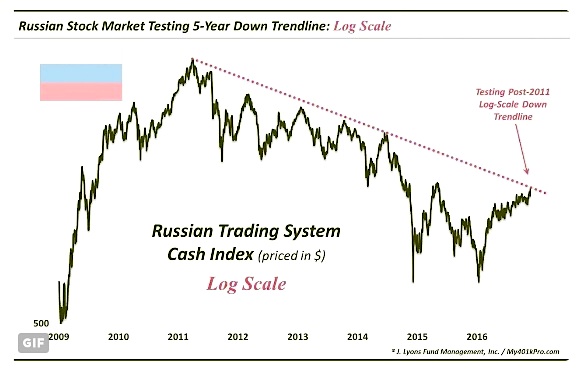 We have seen some resource-related indices seemingly breaking above similar trendlines of late, though we’re not sure that those “breakouts” will be immediately sustainable. Similarly, we would expect that, even if the trajectory for Russian stocks is pointed higher, they may struggle at least temporarily at present levels due to the potential resistance – whichever way you look at it. 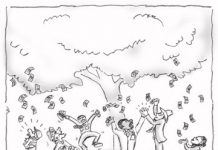