The breakdown and increased volatility in crude oil prices since last summer have made forecasting difficult for industry analysts who must follow the intricate factors affecting supply and demand. On the other hand, volatility has made the technical analyst’s job easier. Here we show why we believe the United States Oil Fund ETF (USO) – the premier ETF that tracks crude oil prices – is destined to trade lower into next year.

We aren’t suggesting that traders should ignore fundamentals. Some trends and developments in the industry are fairly predictable in their effect on prices. At present, we believe there are several aspects of production and demand that should continue to hold prices down:

We are mindful that unpredictable geopolitical disruptions can still cause oil prices to spike. Even so, we believe it is easier to find the trades in this market by using charts and indicators than by reading news reports.

The big crash in oil prices during 2008 left some clues on oil charts that remain useful even six years later. In particular, the quick decline did not have the characteristics of a completed correction. During that year, we did not see the kind of wave structure that reflects market participants “arguing” over where price should be.

The breakdown in prices last summer convinced us that the next downward leg of the correction – wave C — had begun. The monthly chart for USO shows how we believe price is progressing through a five-wave move down from the high in 2013. 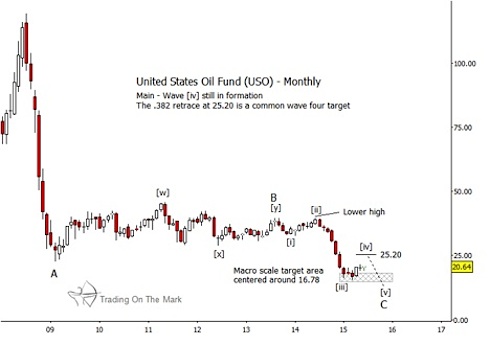 USO has bounced from a big-picture support area in what probably is a fourth wave. For that scenario to remain in favor, we would not want to see price go much beyond the 38.2% Fibonacci retracement level of wave [iii], or about $25.20. However, there are additional potential resistance targets calculated based on structures seen in a faster time frame. 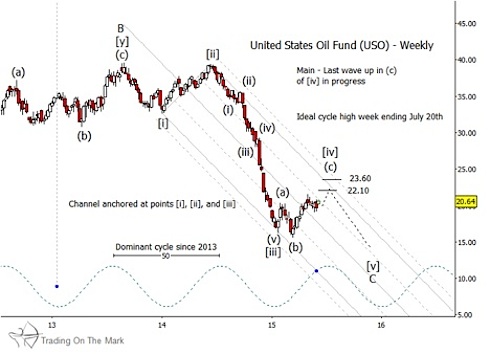 Since the 2013 high, USO has formed a nicely defined channel on a weekly chart. The center of the channel acted as resistance in April, and we would expect the upper edge of the channel to have an effect on price later this year at a level substantially below the 38.2% retracement mentioned earlier. In addition, Fibonacci extension measurements for the internal moves of wave [iv] put near-term targets at $22.10 and $23.60.

The next opportunity in trading oil markets probably will be downward. We expect price to reach for a lower low as it completes a five-wave pattern from the 2013 high. As always, we will keep subscribers up-to-date with revised price projections based on next developments.

We’d like to offer See It Market readers some exclusive charts and analysis that can help you catch the summer trades. Visit this page to take advantage of our free offer including select trading setups and analysis.