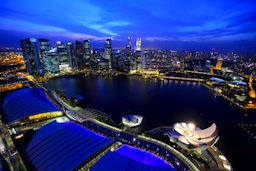 By Jeff Wilson
After a terrific article by Alex Salomon on the deep-seeded cultural and economic issues facing France, I would like to take you to a sub region just a 10-hour flight away from the heart of Europe: Southeast Asia.

Over the next two weeks I’ll be sharing a 3 blog series on the region, guiding you through an area of the world that I am quite familiar with. In summary, I’ll look at the following countries/special administrative regions: Hong Kong, Indonesia, Malaysia, Philippines, Singapore, Thailand, and Vietnam.

While this series will provide plenty of social and economic color on Southeast Asia, it is not intended to be read as an exhaustive course study on any one particular country. Rather, it should be viewed as an outline that offers the reader a glimpse of the region, and collective emerging countries that don’t get their fair share of mainstream media attention. We’ll plan on looking at factors that traditional macro analysis doesn’t include, as well as some longer term charts of county ETFs and ETNs (Taiwan should be included but note that it’s status in the international organization scene is currently undefined. Therefore, data from international organizations is absent. We will, however, take a look at the chart of the Taiwan ETF). 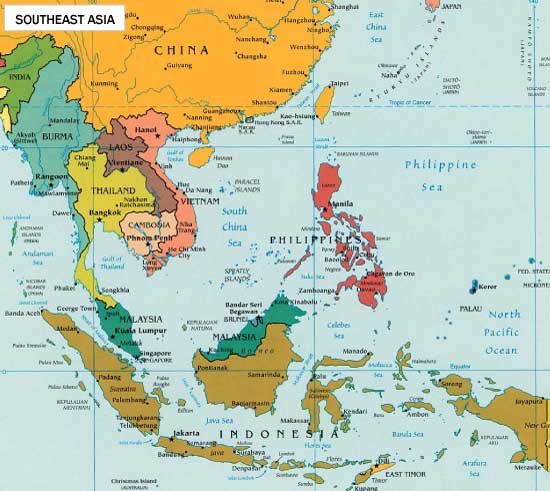 But before we get into summarizing the collective parts of the region, I’d like to explore an important socio-economic development indicator that not many traditional publications focus on: a society or population’s ability to connect to family, friends or people of influence whether it be local, regional, national or global.

Why? Because people of influence contribute to a person’s purchasing behavior, which, in turn, powers consumer driven demand. These economies have learned that export led growth can only get a country so far in terms of development. Not only does consumer driven demand fuel economic growth, but it also makes countries less reliant on macro developments outside the country and thus helps alleviate any downward economic pressure from sporadic macro shocks. Figures 5 and 5a below illustrate “connectedness” in its basic form: Mobile communication and Internet use. The rise in “connectedness” has assisted in breaking down barriers that slow or prevent communication among circles and societies. 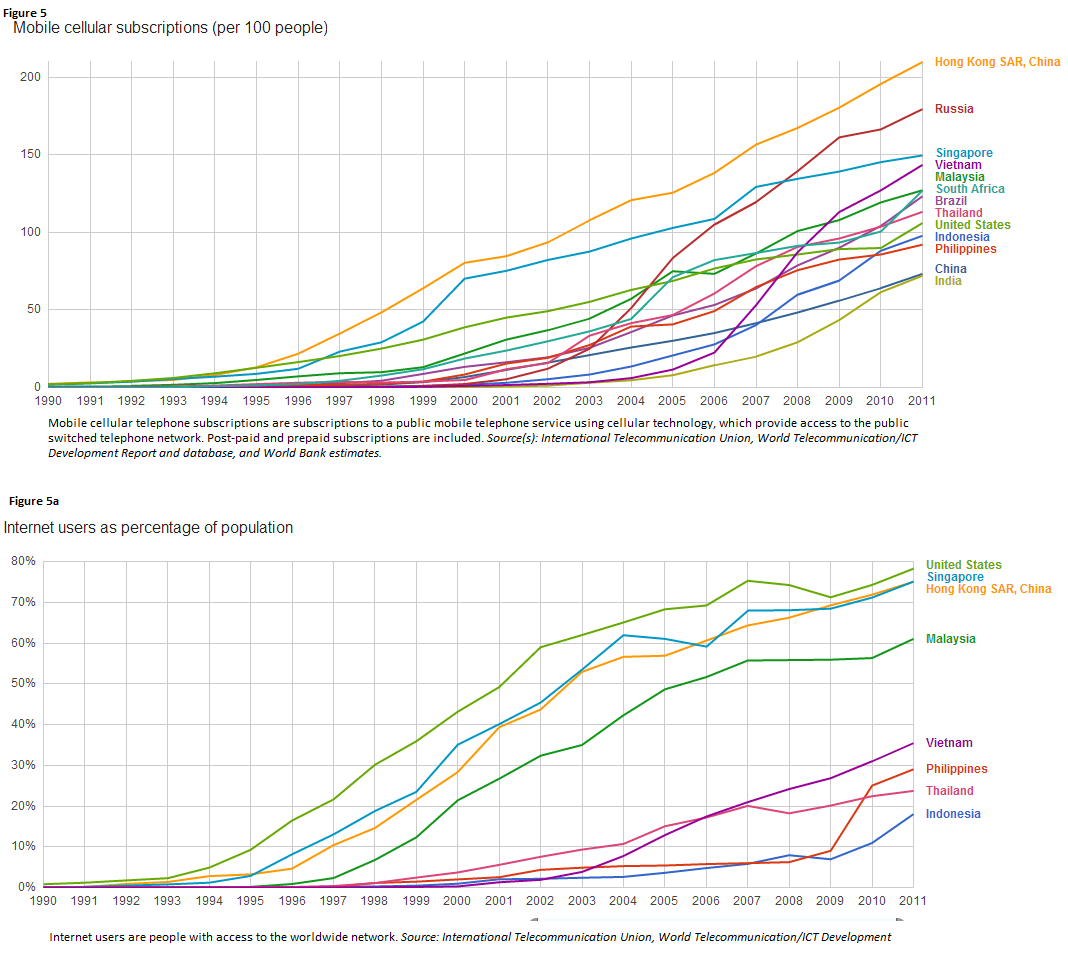 1. Aside from Indonesia and the Philippines, on average, each person owns more than 1 mobile cellular line.  Hong Kong has over a 2:1 ratio of mobile cellular subscription for every 1 person while in Singapore and Vietnam there is almost a 1.5:1 ratio.

2. All of the aforementioned southeast Asian countries have a higher cellular subscription density than larger emerging/developing neighbors, China and India.

Trends in fashion and lifestyle now move faster across traditional geographic lines, helping to drive purchasing habits. Faster and more reliable forms of communication and social networks further aid this. Figure 6 shows that 6 of the top 25 and 2 of the top 10 countries with the largest Facebook user base are countries mentioned here.

This is the first of many indicators that we will explore in the series. Note that there will be more indicators and analysis forthcoming in Part 2.

That said, I’d like to provide a quick, macro economic summary of each part of the region. So without further adieu…

Hong Kong:  One of China’s 2 administrative regions, Hong Kong’s economy is primarily reliant on the service related industries with roughly 93% of its GDP coming from the services industry. 41% of its labor force belongs to the wholesale/retail trade, restaurants, and hotel sector, while 12.5% belong to the finance, insurance and real estate industries.

Indonesia:  The 4th most populous nation of the world has one of the most diversified economies within this region. Rich in hydrocarbon resources without relying on the resource, it’s the world’s largest producer and exporter of palm oil and second largest exporter of coal (McKinsey & Co.). It’s also the 2rd largest producer of cocoa.

Malaysia: Similar to Indonesia, Malaysia has moved to an economy reliant on producing raw materials to an economy that attempts to achieve diversification, offering its people an opportunity to move up the chain of value added production. The country’s GDP composition is balanced between the Industry and Services sectors (40.5% and 47.5% respectively 2011 est.).  The services industry grew by 7% in the 3rd Quarter of 2012.

Philippines: The country just reported one of the best performing benchmarks in 2012, a 7.1% year over year growth in GDP for the quarter ending in September. This was well beyond expectations. During the most recent global recession, the country weathered the effects better than its neighbors, primarily due to the minimal exposure to troubled financial securities, resilient domestic consumption and large remittances from overseas Filipino workers.

Singapore:  Along with Hong Kong, Singapore is the only other country in the region classified as a High Income economy (based on World Bank group classifications). And just like Hong Kong, Singapore is considered one of the financial centers in Southeast Asia. The government has aggressively and successfully promoted the country as a destination for investments in biotechnology and medical technology. Read Fellow See It Market contributor, Joshua Schroeder’s piece “ETF Investing: A Compelling Case for Singapore” to gain further insight into the Singaporean economy.

Thailand:  As a highly developed, market-oriented economy, Thailand boasts one of the lowest unemployment rates in the region (do note that unemployment rates are calculated differently for each country). Heavily reliant on its exporting businesses, Thai exports account for over half of GDP. That said, they are still recovering from the floods of 2011 that crippled the manufacturing industry and severely slowed the country’s economic growth.

Vietnam:  However slow compared to its neighbors, Vietnam’s economy has moved towards a market-based economy. Though still dominated by state owned enterprises, which still contributes to about 40% of GDP, the government has committed to implement reforms to promote growth and privatization. Having one of the highest inflation rates in the region (around 18% for 2011), the country faces an uphill battle. Higher borrowing costs, low foreign exchange reserves and a banking sector that is in dire need of capitalization are a few of the issues Vietnam must wrestle with in the coming years..

That brings us to the end of Part 1. Please come back next week for Part 2 in the series, where we’ll dig deeper into a series of growth factors that will assist the region in its hunt for global economic integration. Thanks for reading.