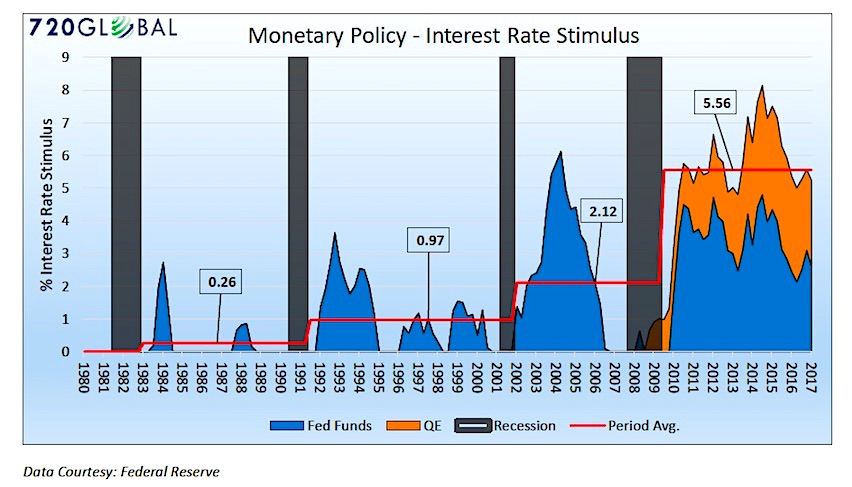 To help quantify the amount of stimulus, please consider the graph above.

Federal Reserve (Fed) monetary stimulus comes in two forms as shown above. First in the form of targeting the Fed Funds interest rate at a rate below the nominal rate of economic growth (blue). Second, it stems from the large scale asset purchases (Quantitative Easing -QE) by the Fed (orange). When these two metrics are quantified, it yields an estimate of the average amount of monetary stimulus (red) applied during each post-recession period since 1980. It has been almost ten years since the 2008 financial crisis and the Fed is applying the equivalent of 5.25% of interest rate stimulus to the economy, dwarfing that of prior periods.

The graph highlights that the Fed has been increasingly aggressive in both the amount of stimulus employed as well as the amount of time that such monetary stimulus remains outstanding. Amazingly few investors seem to comprehend that despite the massive level of monetary stimulus, economic growth is trending well below recoveries of years past.

Additionally, as witnessed by historically high valuations, the rise in the prices of many financial assets is not based on improving economic fundamentals but simply the stimulative effect that QE and low interest rates have on investor confidence and financial leverage.

Now consider the ramifications of a Fed that continues to increase the Fed Funds rate and moves forward with plans to slowly remove QE.

** Note the QE stimulus is calculated based on a congressional hearing in February 2011, when Bernanke suggested that every $6.6 to $10 billion held in excess reserves has the effect of lowering interest rates by one basis point or 0.01%.

Is the Nasdaq About To Fall 25 Percent?