The Big Macro Event that had been hanging over the stock and bond markets the last month was finally resolved last week when the March Federal Reserve FOMC meeting concluded and Fed Chairwoman Janet Yellen announced that they were removing the word ‘patient’. Those expecting higher interest rates were initially cheered by that removal. Their celebration was short-lived, though, because she then went through a litany of economic data that reiterated that the U.S. economy is slowing down.

The simple message that the Federal Reserve is sending is that they won’t be raising interest rates any time soon.

In last week’s stock market commentary I mentioned that it was possible that the March Federal Reserve meeting could see them remove the word ‘patient’ but still signal that they wouldn’t be raising rates any time soon. So, in a way, Janet Yellen found a way to make everyone happy. In essence, the message was one of easing monetary policy, and from that standpoint, she is following the same playbook as Japan, China, Europe and several others countries around the world.

As a result, bond yields dropped, resulting in a 3% gain for the day in the Vanguard Extended Duration ETF (EDV). And stocks soared because with continued low interest rates the stock market party can continue longer.

How does this affect the way I am managing money?

First, it means that the significant US Treasury bond positions have recovered nicely. On March 6th, the 10-year US Treasury bond hit a March high with a yield of 2.26%. It started last week with a yield of 2.10%. As soon as it became apparent that the Federal Reserve wouldn’t be raising rates any time soon the yield then plunged to a 1.93% yield where it ended the week.

Remember, those who own bonds make money when yields go down. So my bond positions had a great week. And so did positions in stocks. But look at this chart that shows the difference between the S&P 500 Index (blue line), the iShares Barclays 20+ Yr Treas.Bond (TLT) (red line) and the Vanguard Extended Duration ETF (EDV) in the gold line. 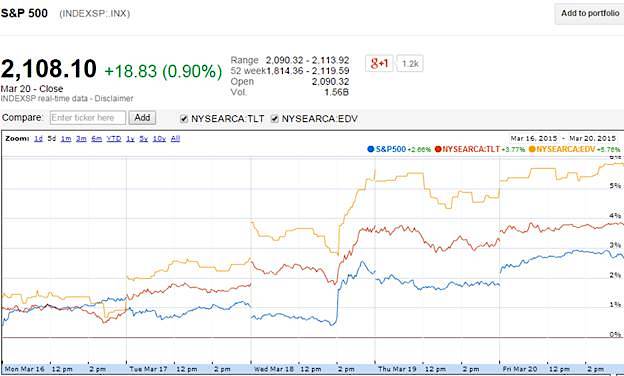 Here is how these three positions compare over the last month: 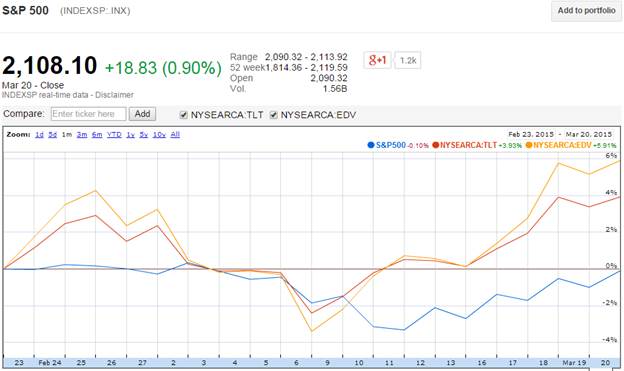 That being said, I believe that in the short-term that equities can also do well so I anticipate continuing to add stock positions in the area of healthcare, bio-tech, housing and consumer-discretionary on market pullbacks. As always, the timing of when to enter is important and I’m not eager to invest at all-time highs.

The bottom line is that now even the Federal Reserve is acknowledging that our economy is slowing. We will likely see oil prices fall over time and ongoing deflationary pressures continue throughout our economy. That is not good for the government, but it is good for the consumer.  This type of environment in one where I think there remains significant potential returns in US Treasury bonds.

The author holds positions in mentioned securities at the time of publication. Any opinions expressed herein are solely those of the author, and do not in any way represent the views or opinions of any other person or entity. 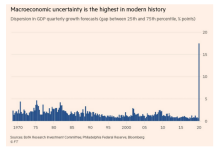 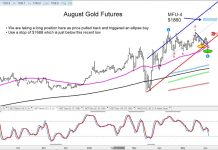