As the U.S. Dollar continues to strengthen, we are watching to see how the CurrencyShares Euro ETF (FXE) will react to nearby support. In our main Elliott wave scenario, the chart should develop into a sizable Euro Currency decline from the present area during the next two to three years. This forecast is consistent with our upward projection for the U.S. Dollar Index, which you can view over on our website.

In the larger picture, we think the Euro has been tracing an Elliott wave corrective [a]-[b]-[c] pattern downward since 2008. As sometimes happens with such patterns, the middle segment took the form of a time-consuming triangle – representing a correction inside a correction.

After price completed the fifth and final wave of the triangle, it broke downward fairly rapidly in a developing wave [c]. Since wave [c] should consist of five sub-waves, and since we only see two on the chart so far, we anticipate further down, sideways, and down swings for this Euro currency decline. 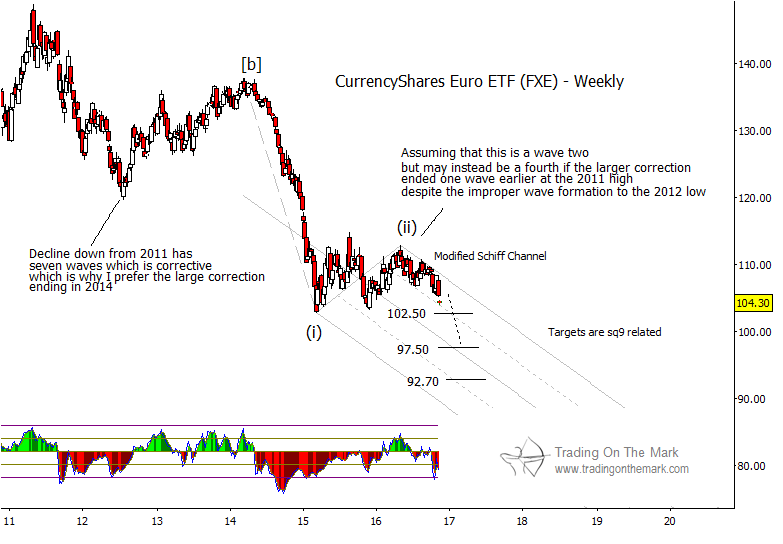 The monthly chart allows us to identify rough downward targets based on the large channel we have drawn and also based on Fibonacci-related supports. The earliest big-picture support is near 101.60, but we believe it is more likely that supports near 98.00 and possibly 91.70 could be tested in the third sub-wave of the sequence. Eventually FXE might reach as low as 87.00 to finish the fifth sub-wave, but that is just speculation for now. 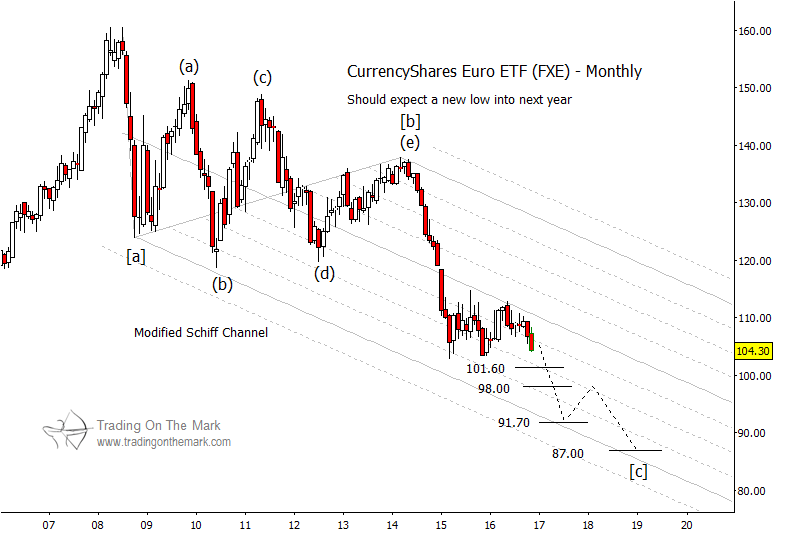 On the weekly chart, we have drawn three Gann-related support levels that traders should watch as possible areas for sub-wave (iii) to end. It is very likely that 102.50 will be tested, and quite probable that the area near 97.50 might be tested as well. A test of the lower target of 92.70 is not as certain in the near term.

Also read:  Why Shares Of Apple (AAPL) May Be Headed Lower