Of the sector’s eight industries, Diversified Financial Services trails only Insurance in growth at a torrid 36% pace (down from 41% on 01/03/14) with Bank of America (BAC) taking top honors, reporting a Q4 2013 EPS at $0.29, a 9-fold y/y increase v. last year’s $0.03.  All told the optimism for Diversified Fin Services (and Fins, generally) has slackened mildly as releases have come in; but the industry remains broadly on-track as the second most potent driver of EPS growth for the entire S&P (SPX) in a surprisingly positive (especially vis-a-vis those record negative preannouncements) earnings season.

Is the disparity between the upward trajectory of EPS growth (dispensing for a moment with the vital question of just what’s driving that) and an unsustainably acute expectations curve for the sector beginning to close? Maybe this is the long-expected tipping point where the dazzling sweep of earnings growth is overtaken by a measured concern over earnings quality (not to mention the persistent absence of revenue growth).

Those are narratives worth considering: and the industry’s technical backdrop certainly supports them.

How supportive? BKX itself is wrestling with it’s most significant technical level since the Q1 2009 bottom; this time at resistance after almost quadrupling in the last 5 years.  As impressive as that sounds, BKX has recovered only 50% of its 2007-2009 crash; and it’s here that two major bearish harmonic patterns converge.

In a theme that’s playing out across S&P 500 sectors and many individual industries alike, it’s increasingly evident that BKX really was “frothy” in late 2013 and early January 2013.  This – albeit modest – fit of exuberance created an overthrow of major resistance at the 50%  fibonacci retracement. Briefly jilted but not to be ignored, this level near $69 turned on the tractor beam, forcefully asserting itself in later January.  This is what comes of a brief bout of animal spirits. 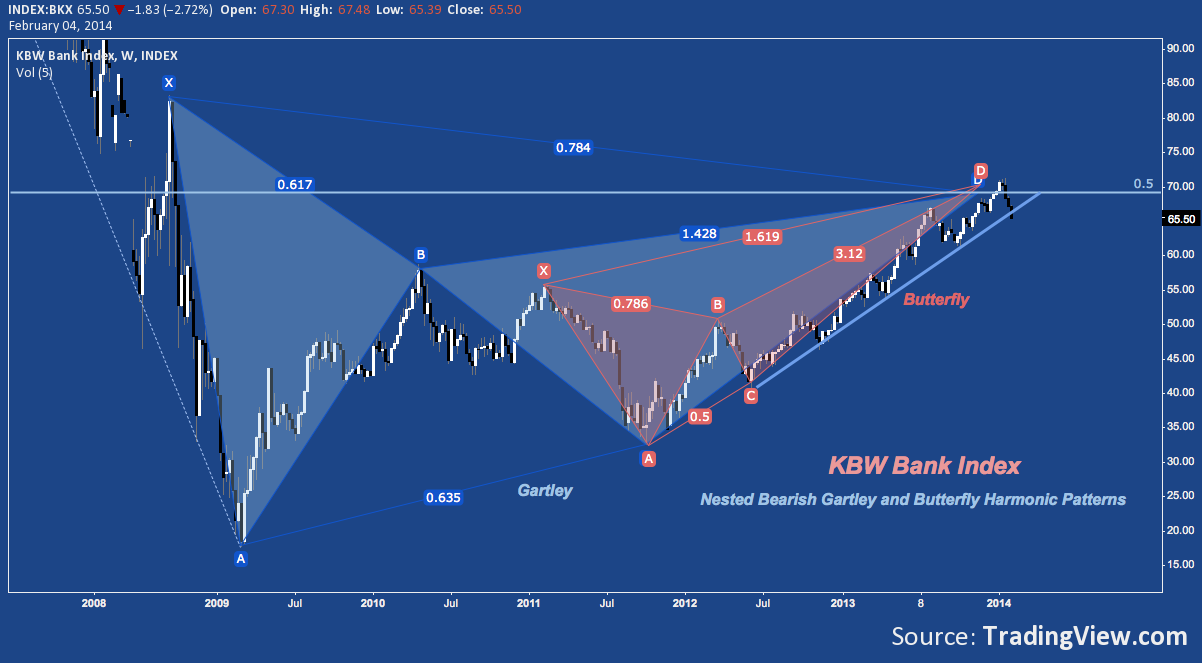 As it happens, this spot near $70 is exactly where the 5-year Gartley (blue) and 3-year Butterfly (orange) harmonic patterns project potential resistance.  With the rising trend line off June 2012’s higher low (at Orange point C) broken after yesterday’s rout, support for the industry next comes in at May/June 2013 resistance-turned-October 2013 support near $61, or -7% from here; and then in the zone bounded by Gartley point B and Butterfly point X between  $55.50-$58 or 11.5-15.25% lower.

Technical Overview of the Top 5

There’s the big picture.  But how does BKX break down?  Here’s an overview of the 5 largest banks in the index by weighting, altogether comprising about 36% of the 24-component measure.

At 9% of BKX and the greatest source of the industry’s headline EPS growth in Q4 2013, Bank of America (BAC) is arguably the bellwether of US banking.  More than tripling since Q4 2011’s bottom below $5, BAC is moving into the tip of a broad rising wedge and at increasing risk of breaking down. Like BKX, early January saw BAC overthrowing major cluster resistance near $16.50, reaching just over $17 before falling to wedge support.

Bank of America (BAC) – Weekly:  Tip of the Wedge (click image to zoom) 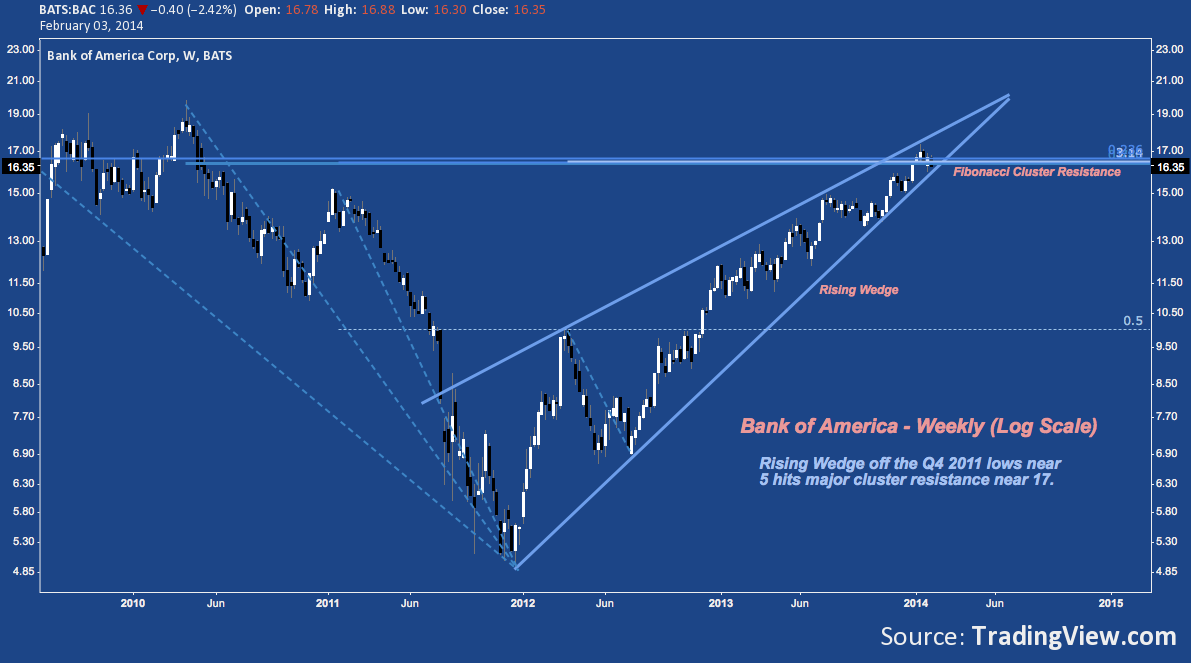 How can we know BAC – and by extension, major US banks – got ahead of itself?  Here’s a variant look at the chart above. For only the second time since the cyclical bull market began, Bank of America installed three consecutive closes above its Upper Bollinger Band (20SMA, 2 StD).

This is a rare event in-and-of-itself (occurring <1% of the time); but is it significant?  After this occurred in 2010 (near $18, or just above where it occurred here), BAC immediately began a decline that bottomed 75% lower some 88 weeks later.  That’s a single occurrence only so there’s almost zero statistical merit; but it is worth noting, and in conjunction with these other technical factors (i.e. wedge, cluster resistance) suggests a decidedly bearish turn for BAC that hasn’t been seen or felt in some time. 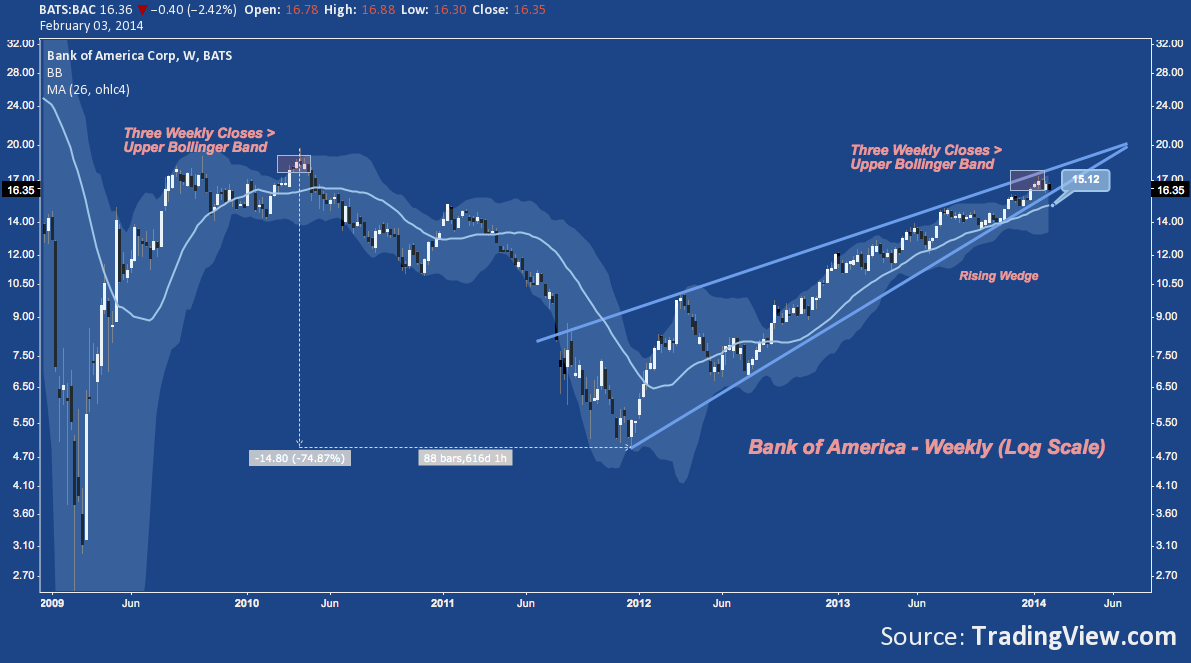 The House of Morgan runs a close second to BAC in the BKX weighting.  It’s technical landscape bears great similarity to Bank of America, adding nuance and mutually strengthening the case between them there’s a rough road ahead.

Check out the notes on the chart below. 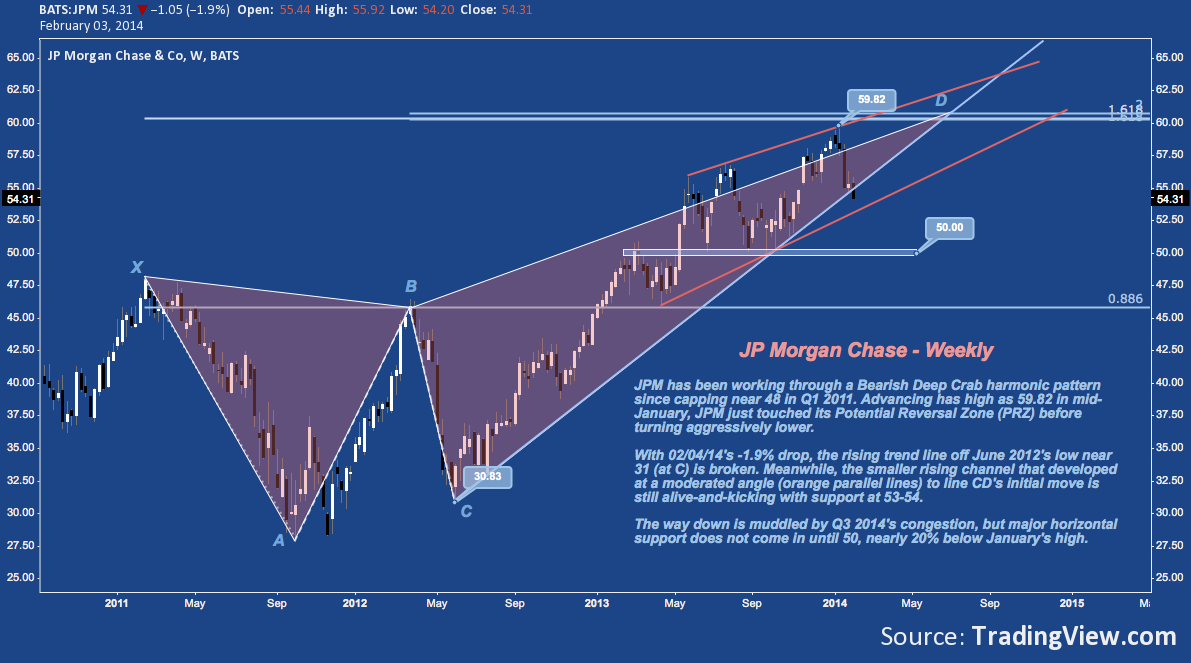 Citigroup (C) has probably the most representative (all the more so for its bull trap brutality) chart of the overthrow that much of the S&P 500 produced over the last two months.  Through 02/03/14, the corpulent corporate sluggernaut is off -16% in 16 market days – a a chut down that began the session after installing a 4.5 year high. 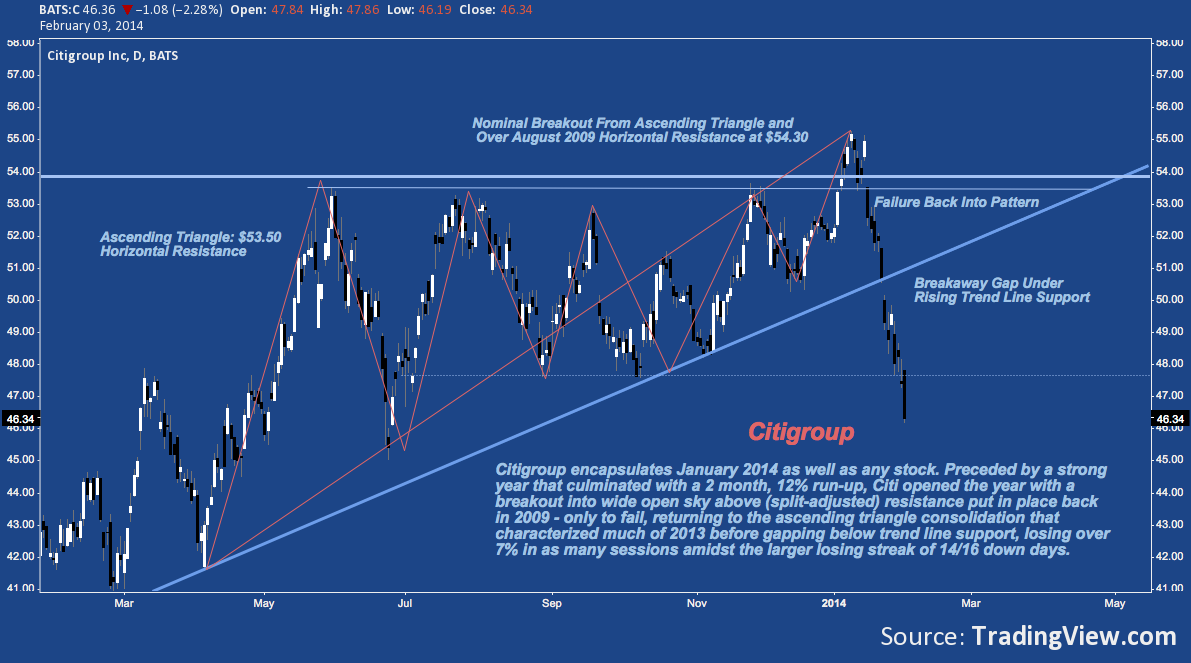 Is there any hope? Always; but it could get appreciably worse.

Silver lining: if there’s going to be blood (yes), the board should bring back Chuck Prince for some cosmic big bank karma.  Maybe he can provide the proverbial zombie headshot by establishing a mandate to bloat C‘s balance sheet with a smorgasboard of collateralized rental obligations.  Surely he’d be an excellent non-Jamie Dimon test case of Dodd-Frank-era executive invulnerability.

Back to the charts. 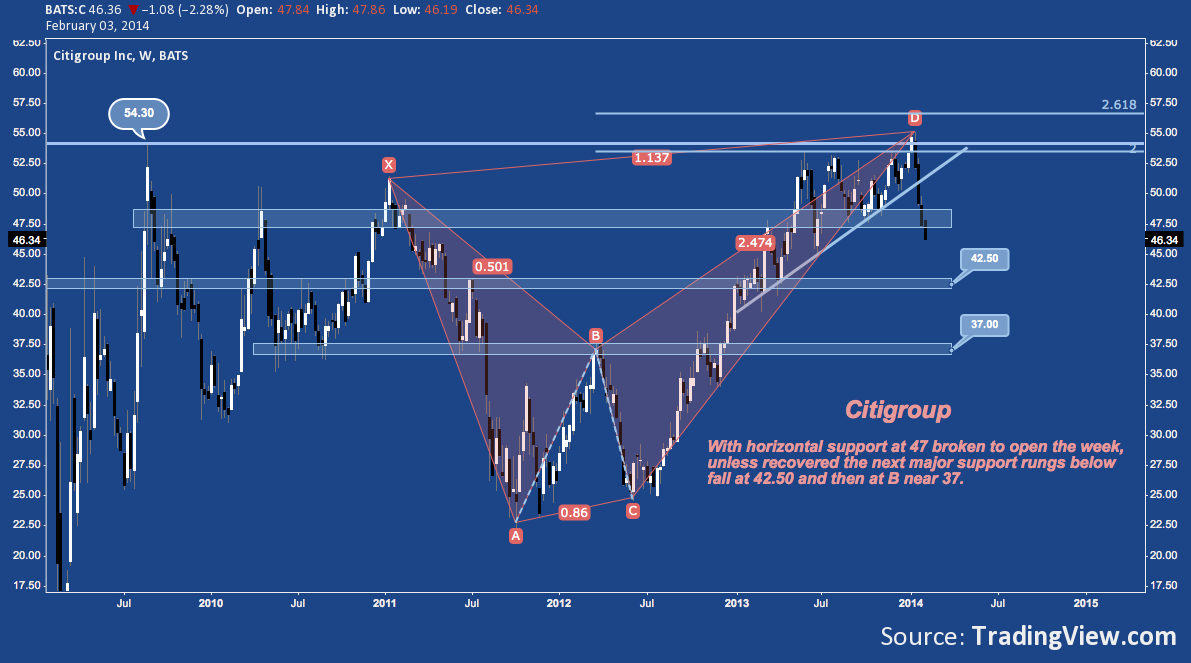 Wells Fargo (WFC) has always moved to its own technical rhythm. There’s no exception here; but in spite of its unique construction, the “overthrow at major harmonic resistance” theme is just as powerful here. 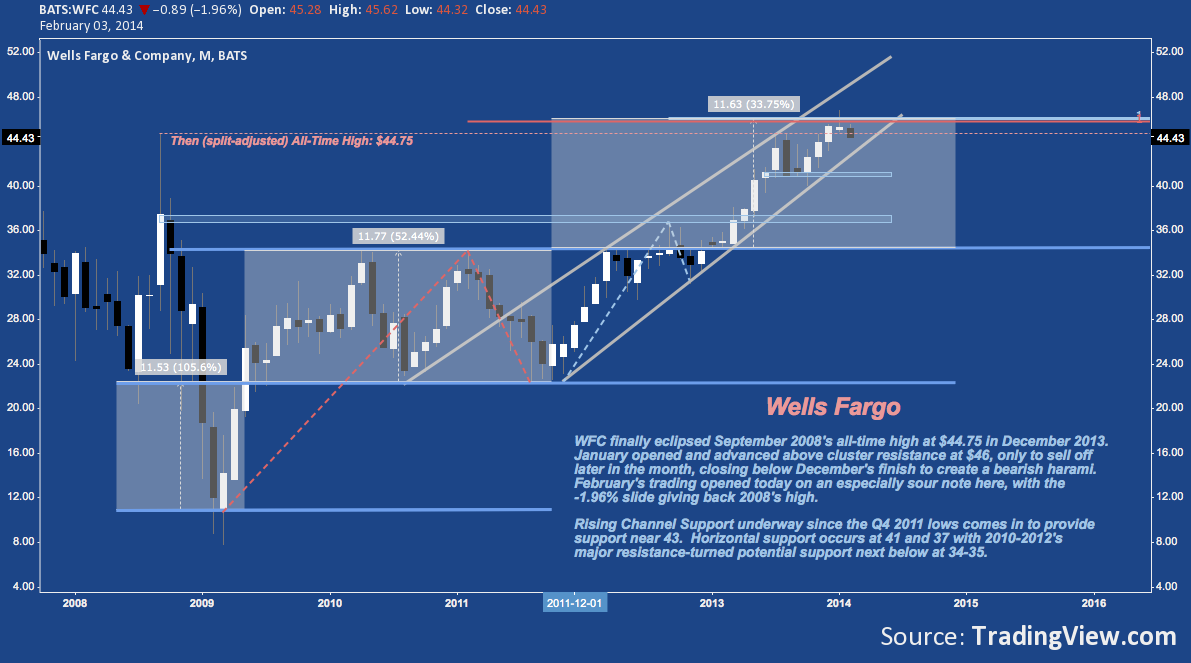 Representing the major Regionals at approximately 4% of the BKX weighting, Suntrust (STI) has produced a multi-month echo of early 2011 at the top of a massive corrective flag. Like BAC‘s Bollinger Band event (discussed above), this extended candlestick pattern has only occurred once during the recovery. The consequences, if unlikely, are nearly as dire.  The real message is: like BAC, in conjunction with other technical variables (trend line and fibonacci cluster resistance) STI‘s tone is taken a major pessimistic downshift. 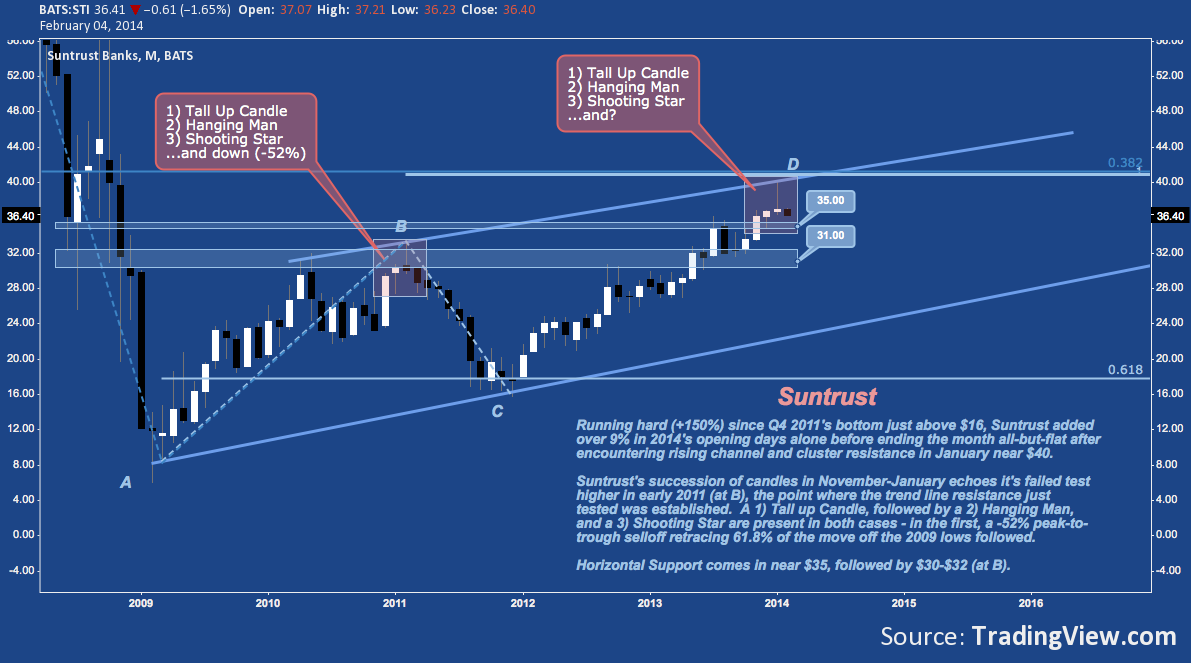 Bonus chart: though it’s not in BKX, a review of would be hollow and completely out of touch with the zeitgeist of the last 5 years without looking in on Goldman Sachs (GS).  So far, the breakdown from its bearish Bat reversal zone has been near-perfection as the stocks works on its 5th consecutive week down. 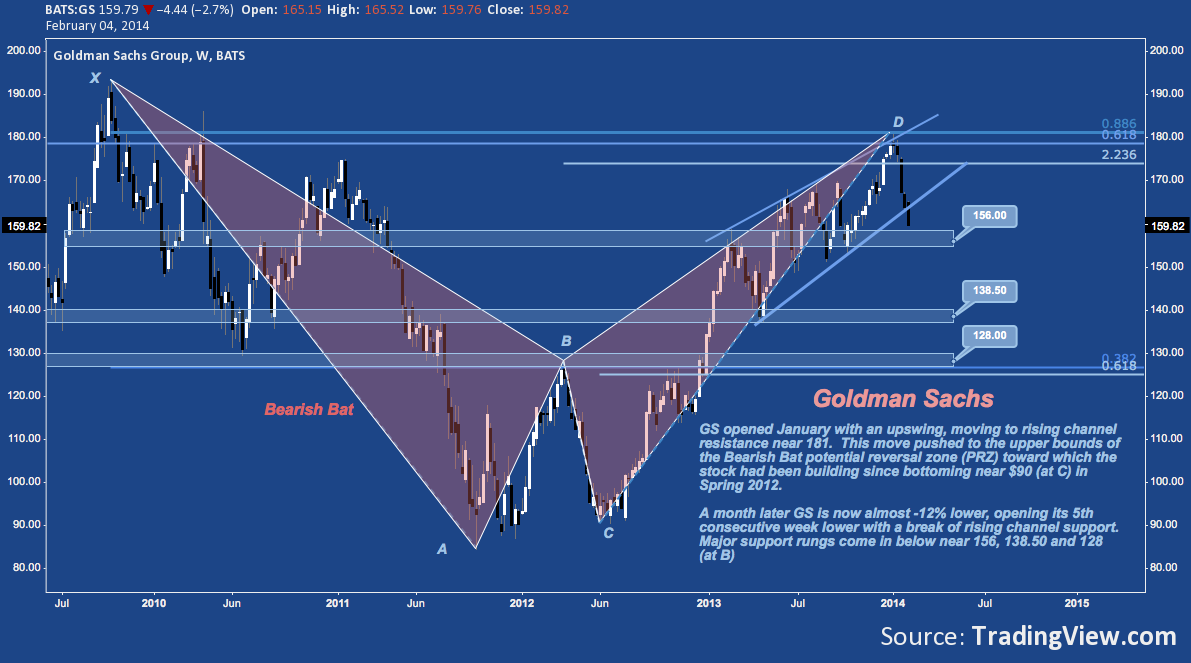 There’s reason to suppose a bear market will ultimately unfold for bank stocks from here.  The patterns beating down share prices right now take in huge ranges and are many months in the making. Like the rest of US equities, these large caps seemed unstoppable in Q4 2013. Now it looks a little more like they couldn’t (“barkeep, just 100 more bps”) stop themselves. Most are off their 52-week highs by double digits.  Avoiding some of the more pessimistic scenarios detailed here is by no means assured.

In counterpoint: the Q4 2013 earnings season is going relatively well: banks are holding up, even if their potency isn’t quite measuring up to original forecasts.  And of course there’s QE: though the Fed has tapered to $65 Billion/month, its balance sheet – and the good news of profitable (IOER) liquidity – is still a staggering force of resilience for the industry that may not be spent.  Best of all, we will now see if the actual market-moving force of the Fed’s operations justifies the thread-worn fashion of parroting the indomitable liquidity put of >$5 Billion POMOs.  Something tells me “Don’t Fight the Fed” is better understood as “Don’t Fight the Feedback Loop Driving Trade Flows Seeking to Exploit the ‘Don’t Fight the Fed’ Meme”.

The flip side of this is that the Fed’s still-increasing stock may be revealing its true (negligible) and disintegrating relevance. All else being equal, tapering is tracking to pinch the fire hose of Flow to a garden hose in the next few months.  How much Flow ends up mattering will be most evident in EMs (which are making a fantastic case at the moment!) and in those companies most sensitive to the Fed’s largesse.  You guessed it: large banks.  In fact, there’s ample reason to posit this industry is exactly where the Fed will look to gauge what toll crimping LSAP will take on the domestic economy and if/when to pause or revert to a greater asset purchase regime.

In that context and amid concerns over a lack of organic growth, positive headline earnings may finally be proving inadequate to the task of staving off a major correction from here.