By the way, when it finally arrives it will probably be far worse than ’08-’09.

BUT we are not here yet. Perhaps a correction for the S&P 500 NYSEARCA: SPY and Corporate Bond ETFs NYSEARCA: LQD NYSEARCA: HYG

For the inverted yield curve to undermine credit flows it needs to remain inverted for some time.

Preceding the ’01 collapse, the curve inverted for about 2 months in 1998 causing the first wave of damage to credit spreads. It then inverted again (and deeper) for much of 2000, blowing out spreads and leading to the ’01-’03 collapse.

In 2006 the curve was inverted for most of the year, and by the time the market started pricing the series of Fed easings that began in mid-’07, it was too late.

Corporate spreads had already blown out, and the Municipal Auction Rate Securities market, one of the most liquid institutional markets of those days, would shut down (literally) by the end of ’07, trapping a whole bunch of short-term liquidity (yours truly included) for months.

While cash and derivatives spreads got pummeled today, the overall move of the last few weeks is not even close to the widening seen in Q4 of last year. Furthermore, one of the linchpins of a credit crisis is forced selling of bonds by leveraged buyers.

I track the performance of a cross-section of the largest bond issues sold in Jan-Feb and in Sept-Oct of every year, the two key annual issuance periods for corporate credit. Just as a point of reference, the cross-section of the largest issues sold in Jan-Feb shows a YTD PRICE GAIN of 12% on top of the coupon. Buyers don’t get margin calls when their asset prices are up 12%.

There are dozens of real and “newsy” reasons for equities to go down further from here, but none of these reasons – FOR NOW – are likely, or enough, to cause another financial crisis. The next biggest worry for the bulls should be the tone of credit in the upcoming September issuance period. Last year it was a dud and stocks did not take kindly to that for the rest of Q4. Another whiff this September on top of all other worries, might to lead to a repeat of last year’s Q4 or worse.

I urge you to read a couple of my previous article on See It Market to gauge the big picture and learn how we got here. I noted in these articles, Without Yield Curve Inversion, Investors Face Tricky 2019 (a correction roadmap) and Change in Risk Profile for Corporate Credit, the risk to the credit market has increased yet again (the 3rd time in 18 months), but it has not – YET – suffered the kind of lethal blow that will end the bull cycle that began in January 2009 (yes January, not March when the equity markets bottomed).

And if past is prologue, it is very likely that an aggressive easing cycle by the Fed may spur a blow off upside move in equity and risk assets, just as it did in ’98-’00 and ’06-’07. If that happens, and it coincides with credit spreads widening under the surface, that will be the signal to batten down the hatches, and that the collapse many bears have been calling for Lord knows how many years, is finally truly at hand.

The author may have positions in mentioned securities at the time of publication. Any opinions expressed herein are solely those of the author, and do not in any way represent the views or opinions of any other person or entity. 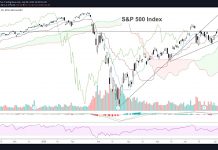