Today we’ll dig into the credit markets and highlight some emerging concerns (near-term).

That’s the good news. The bad news is that the Treasury base has gone up about 80bps (Blue).

The result (excluding any hedges), is that, on average, those who bought into the largest issues back in the fall are now sitting on mark-to-market losses. (Fig2). 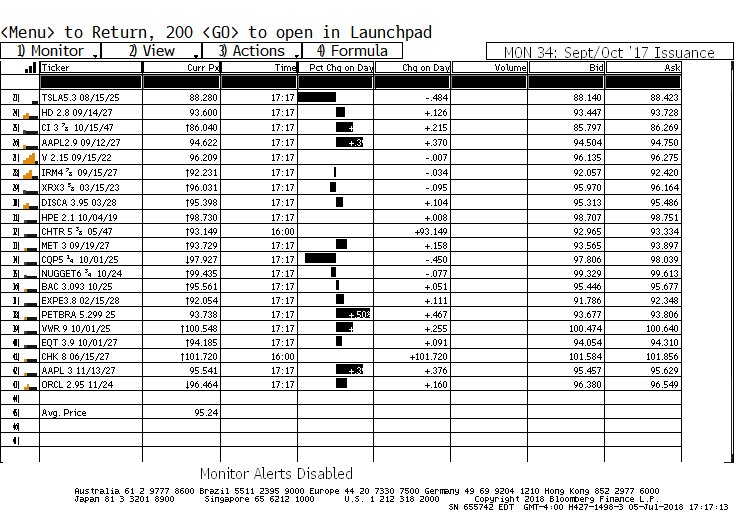 The silver lining to these losses is that when risk spreads behave but base yields rise, as long as credit buyers have fresh money to put to work (and they are flush with cash right now), they’ll come back for more, and average down on their holdings. True to form, year-to-date they’ve already taken down $907B of new corporates, just slightly less than last year’s record pace.

However, averaging down becomes far more problematic when the flow of new money slows down and eventually stops. In a best-case scenario, the averaging down maintains the cost basis of those portfolios near par. That does not leave much of a cushion if/when risk spreads start widening.  At that point prices start dropping rather fast; credit books usually prove to have leveraged up too much during the “averaging down” process; margin calls hit, and credit buyers turn into credit sellers. In that scenario it doesn’t take long for the sellers to go “bid wanted”. That was the movie that played out in the early 2000’s and in ’07-’08.

So, if you believe the above dynamic, the key to anticipating the unwind rests on anticipating when the new money flows ultimately end. A number of events can influence a slow-down of new allocations to credit, but since the mid-1990’s what has outright killed the money-flow cycle has been an inversion of the 2-10 yld curve.  As I write, the curve is at an anorexically skinny 27.8bps.

The Fed is 1000% aware of how critical the yield curve is to a credit space already way more leveraged than before ’08-’09, and it will do backflips to avoid an inversion and to keep the curve as steep as possible. But given where the curve currently sits, it is self-evident that the margin of error for the Fed is as small as it gets.

There’s a vocal debate over how the Fed will attempt to re-steepen the curve: some argue that it will stop raising short term rates, while others suggest that they will start shifting their supply to longer dated maturities, and/or talk up their tolerance for an overshoot of its inflation target. I won’t try guessing how it plays out, but if I had to make the call I would go with the latter option.

I’m posting this now not because I think we are near the implosion/unwind phase. I will repeat, and it is key to accept, that – if past is prologue – a flat yield curve will (on the margin) deter leverage and risk taking, but it will NOT end the flows that keep the corporate credit cycle alive. That will occur when the yield curve actually inverts. Furthermore, in past occurrences, the lag time between the inversion and the collapse has been 12-24 months long.

However, there is little doubt in my mind that the credit party is past the days when base yields AND spreads marched relentlessly lower, and bond buyers showed mark-to-market gains before their new buys had settled.  Credit is now squarely in the “average down phase” and that presents a VERY different risk profile than the credit markets have enjoyed for most of the last 9 years.

So for now, take comfort in the massive amount of money continuing to wash into credit (much of it which is then used for stock buybacks), but understand that the fat P&L days of credit portfolios are in the rear view mirror, and new money will keep things afloat ONLY as long as the yield curve does not invert.

The author has positions in the following mentioned securities: SPY, QQQ, IWM, AAPL, and FB. Any opinions expressed herein are solely those of the author, and do not in any way represent the views or opinions of any other person or entity.