I devoted last week’s market commentary to explaining the incredible volatility that has been occurring in bond yields. I explained that volatility associated with trading bonds has increased dramatically. The 10-year German Bund saw a 514% increase in yield in just 8 trading days! It moved 25% in one 32 minute period. German yields have declined since the day of that flash crash but remain elevated.

The flash crash in Europe and Japan impacted bond yields here in the U.S. but on a much smaller scale. Still, it has been painful and unnerving for those that own U.S. Treasury bonds.

I mentioned in last week’s commentary that the jobs report on May 8th was the next big data point that had the potential to impact bond yields. As you can see in this chart below, interest rates on the 10-year U.S. Treasury (TNX) went from 2.1% last Monday up to a high of 2.25% on last Wednesday when Federal Reserve Chairwoman Janet Yellen make comments that once ‘liftoff’ happened that bond investors could lose money. She didn’t give any indication of when interest rates could begin to liftoff, but anxious investors sold bonds.

Last Thursday the ADP Employment Report was released and interest rates began to decline. Then, the Friday jobs report showed a reasonably steady job environment in the headline number, but the previous month’s number was revised down 85,000 jobs. That sour news caused yields to drop initially… but then they moved back up throughout the day (see chart below). 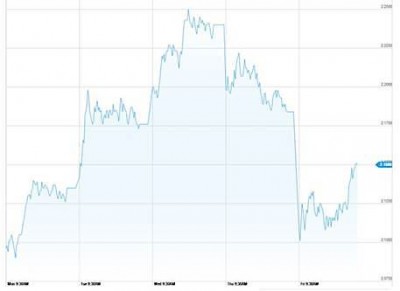 Today, interest rates are climbing again back up to the 2.27% level.

Those that have been most affected by owning bond ETFs such as the 20+ Year Treasury Bond ETF (TLT) are those who bought in some time after the first of the year. I first started buying these positions in accounts back in August and September. Yields back then were around 2.38% in August and 2.63% in September. So those trades are still profitable even with yields having moved up in the last several weeks. I took some partial profits in these positions in late December when yields had declined to 2.03%. The timing of the purchases that I made in January have not done well and those positions are showing losses.

So the key question from a position management perspective remains—should I continue to hold positions in bonds and bond ETFs or fold them and take the loss?

The original reason for sticking with this trade is because economic growth is not taking off… and there has not been a V bottom in the economy. All of the reasons that I’ve talked about in the past (see previous commentaries) still remain true.

That should result in interest rates remaining lower for longer. The more it becomes clear that the Federal Reserve won’t be raising interest rates any time in 2015 the more likely 10-year UST yields may drift back down near the lows. As you can see from this chart, there is plenty of room for 10 year treasury yields to move down from the recent highs. 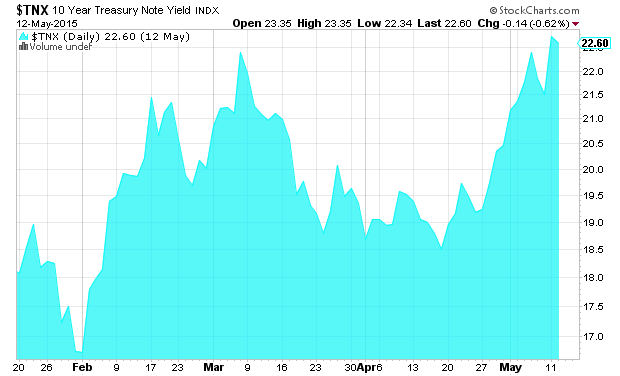 Low interest rates have been helping the U.S. economy. For instance, low mortgage interest rates are allowing people to once again start buying houses and the value of homes is going up. The housing ‘overhang’ has been worked off and the pace of new construction is increasing.

If interest rates continue up from here it will actually choke off the housing recovery and increase the probability of the economy going into a recession. That’s the last thing the Federal Reserve wants so I believe their tendency will be to err on the side of caution until they really start to see inflation pick up.

The question is, should I sell some or all of my bond positions now to prevent any further losses? And that is a valid question. Selling the positions now may relieve the stress associated with the ups and downs that happen on a daily basis, but we still have to find a way to recover the losses.

I continue to have a high level of conviction in this trade. As well, I have reduced exposure to stocks to raise cash.

As I mentioned in last week’s commentary, if I didn’t own these positions I would be buying TLT and EDV right now. They are currently trading near the top of their range and there is a higher probability of gains than losses at this level over the coming weeks.

Lastly, the stock market trending indicator that I use signaled a down trend in US equities last Wednesday. I still think there is more growth possible in equities over the next several months, but in the short-term I would like to see a several percentage pull back before adding to positions.

US Stock Market    Trending Down

US Bond Yields       Yields Trending Up (means prices go down)

The author holds positions in mentioned securities at the time of publication. Any opinions expressed herein are solely those of the author, and do not in any way represent the views or opinions of any other person or entity.