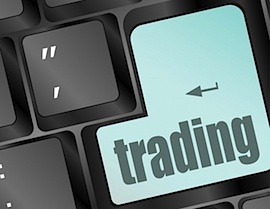 In this age of Exchange Traded Funds (ETFs), the idea of basket trading seems to be a foreign concept. After all, ETFs afford the trader or investor exposure to a sector, region or theme without having to own individual components of a specific ETF.

An order to buy or sell a group of securities simultaneously. Basket trading is essential for institutional investors and investment funds who wish to hold a large number of securities in certain proportions. As cash moves in and out of the fund, large baskets of securities must be bought or sold simultaneously, so that price movements for each security do not alter the portfolio allocation. In order for a trade to be considered a “basket trade,” it must typically involve the sale or purchase of 15 or more securities.

There are many derivations of basket trading but as an individual investor, I tend to use it to create my own equal weighted index. I give credit to @slashinvestor (twitter handle) for introducing me to this methodology. The more common ETFs rarely give me anything close to an equal weighting on its components. The QQQ is highly levered to AAPL. The SPY, being the ETF that tracks the S&P 500, an index weighted by market cap is also an ETF that is highly levered to the likes of AAPL, XOM, JNJ, MSFT and GE. My method of basket trading allows me to create my own index, which is highly attractive to those professionals willing to put in the work.

For example, let’s say you wanted a “cult like following” basket and it would be comprised of stocks like Apple (AAPL), CostCo (COST), Lululemon (LULU), Nike (NKE), Starbucks (SBUX), Tesla (TSLA), and TJ Maxx (TJX). If you had $50,000 to invest in this basket, you would split up $50,000 and invest it equally among each of the components coming up with an equal weighted index. See chart below to see how each component of the basket performed over the past year. While one can easily say “well, you could have gone with just TSLA and called it a day”, a case could have been made for a full investment in AAPL last year!  My method of basket trading, if right, will most likely not be a grand slam trade but will also not likely be a “worst trade ever.” The objective is to have the winners in the basket far outweigh the losing names. This is hard to achieve on a basket or ETF whose holdings aren’t equally weighted. 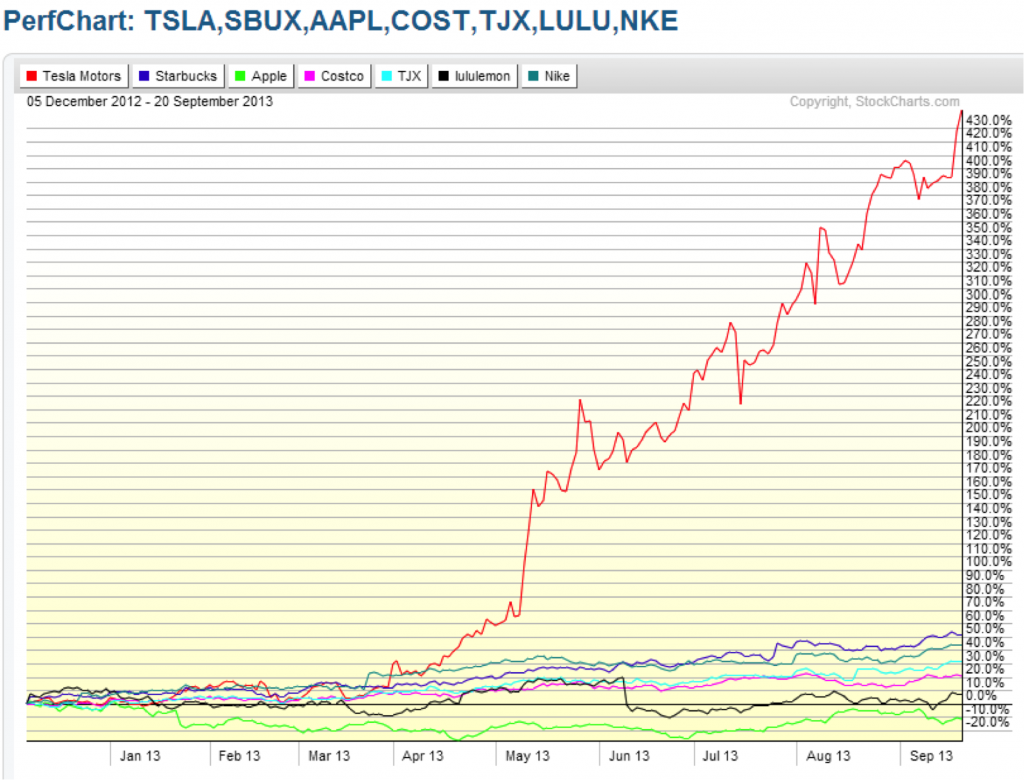 A recent example of a basket trade which I executed is what I titled the “Coca Cola” basket. My thinking:  I wanted to go long Coca Cola (KO)  for fundamental reasons but was also cognizant of the reasons why it has underperformed the market. From a chart perspective, it was also weak versus the rest of the market. Wary of the fact that the market could go into a further decline in August (when I had entered the position), I decided to look at other Coca Cola related companies and possibly do a basket.  After looking at the charts of other related companies like CCE (Coca Enterprise–bottling and distribution arm) and CCH (Coca Cola HBC–bottling and distribution across Europe and 28 other countries), I decided to make this a 4 stock basket comprised of KO, CCE, CCH and KOF (Coca Cola FEMSA–bottling and distribution in Mexico, Central and South America).

The first chart below highlights the performance of the basket since I entered the trades. The second chart highlights full-year performance.  You can see how the other names aside from the more recognized KO have outperformed. 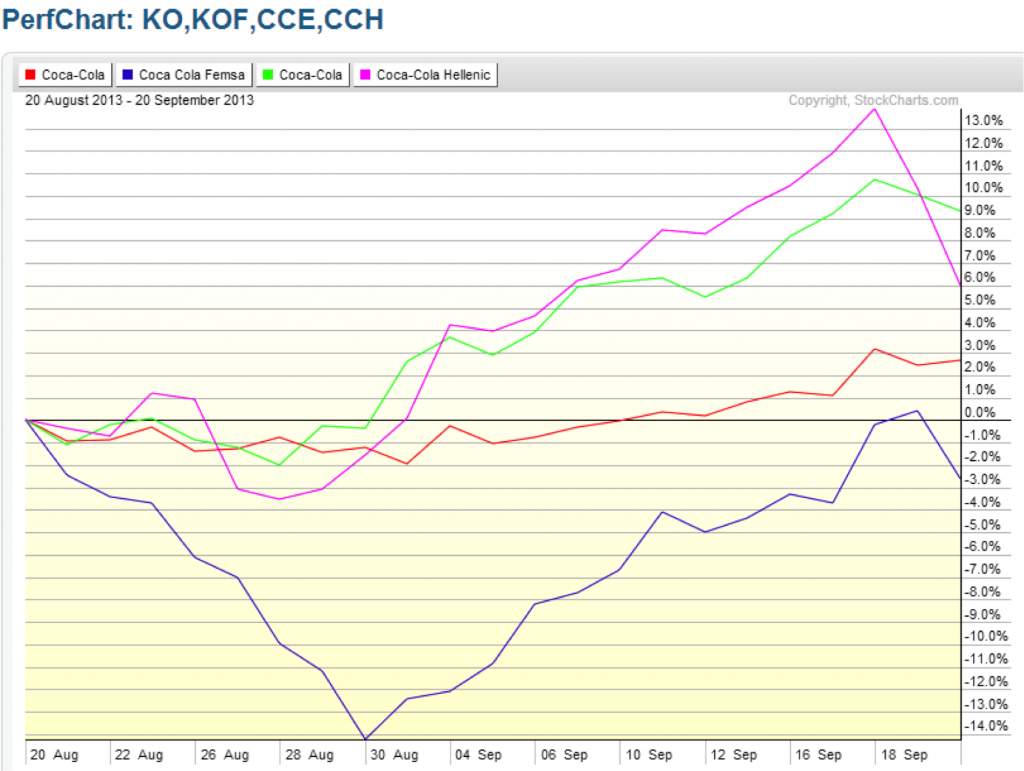 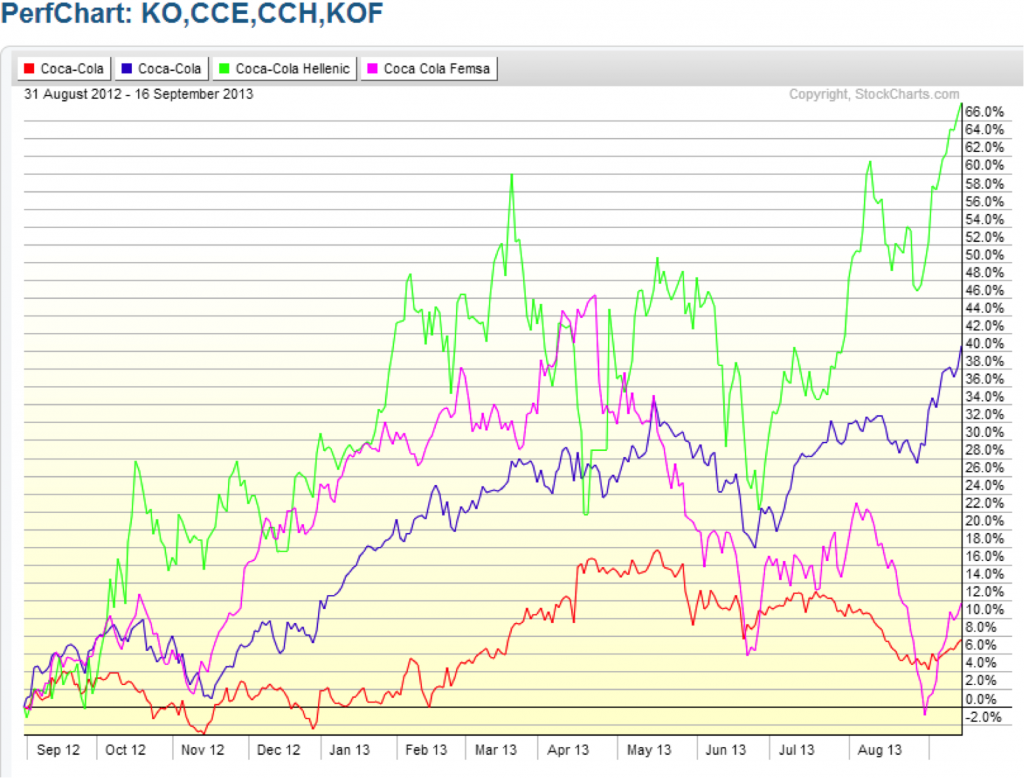 Basket trading is better suited for intermediate (3-12 months) and longer (13-24) term trades.  It’s just another tool that is worth consideration.


Author has a position in KO, CCE, CCH and KOF at the time of publication.