By Max Moore
I recently started reading Santayana’s Curse by Sean Corrigan (of Diapason Commodities). In a few words, the book recounts various monetary pursuits over a long period of economic history and highlights how our ignorance of these instructive parallels has lead to the seemingly incurable laxity in public finance promoted by modern Keynesian thought. And it is this notion that further underscores the concerns of many about government spending. According to my Kindle, I am 19% finished reading the book, but have decided to take a break to share a quote from the book, originally spoken by none other than Napoleon Bonaparte.

“National debt is immoral and destructive, silently undermining the basis of the state; it delivers to the present generation at the execration of the next. I will pay cash, or I will pay nothing.” N. Bonaparte

Even as time marches onward to the U.S. debt ceiling negotiations, global equity markets have shown great optimism for the official Congressional kicking of the can known as the fiscal cliff. In my own opinion, this optimism is unwarranted and will likely be temporary. Debt ceiling negotiations have the potential to rattle markets in the short term (particularly rates and equities). However, the real rattling will come over the long term in the form of a structural “correction” (i.e. breakdown). Here’s my take on the structural problem:

Milton Freidman once said there are only four ways to spend money: 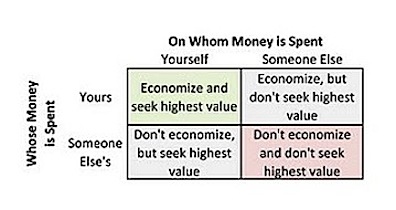 
It is needless to say which box most accurately describes government spending. But the real absurdity begins when you remember that Congress can set its own debt limit. Since debt is merely a claim against the future income of the borrowing entity, by extension, Congress is not only spending money you’ve already paid them but also money you (and future taxpayers) haven’t even paid in yet. Being a 23 year-old jobseeker and taxpayer, I worry about my generation’s ability to meet the demands of excessive public debt. I also worry that nothing will change and that the problem of government spending will continue to compound. Inspired by Napoleon’s bold statement to pay cash or nothing, I’m sharing the simplest model for sustainable government finance my imagination could possibly muster.

Based on the premise that a government does not receive a tax shield on it’s borrowing (being that it collects taxes and doesn’t pay them), a perpetual level of debt relative to tax revenue is pointless. In this vein, it’s understandable that governments should be able to fund recurring expenditures entirely with tax revenues.

To define the frequency with which spending in each of these buckets can occur, let’s make three more categories:

Combining the three frequencies with the three categories we get our nine different types of expenditures. The goal of this framework is to give a thumbs up or down for government borrowing to fund a particular expense. The result: a simple color coded chart indicating when it is okay to spend borrowed money. Note that some boxes have both red and green to allow flexibility to the nature of the expense.

This may seem simplistic, but to give you an idea of how complicated politicians find it, the U.S. government spends almost 100% of its tax revenue on continuously recurring mandatory expenses alone. Following this would at least prevent Congress from perpetually spending money even you haven’t earned yet on you.  The only missing backstop is how frequently these “one-time” expenses get passed.