As traders get ready for another week of market action, they are once again wondering if the stock market has the momentum to continue higher near-term. Several stocks are nearing breakout levels and patient traders may be rewarded if these stocks see follow through to the upside.

Here are 5 stock charts and trading ideas that I am following for the week ahead. Remember to always do your own homework and trade with discipline.

After being battered and bruised, Twitter (TWTR) has been having some very constructive price action lately. The stock seems to have found some footing for the longer term. On the shorter-term horizon, Twitter’s earnings report is due out on October 27th. And the stock has consolidated well and built up some strong momentum – perhaps a nice short squeeze is looming. The stock had a strong day on Friday, supported by news that Steve Ballmer took a 4% stake in the company.

From a chart perspective, Twitter (TWTR) looks to have a saucer type cup & handle. You can also see a bull flag formation. The measured move of the bull flag is approximately 35.54 and the cup & handle slightly above that. The momentum indicators are rising and very bullish with the stock above its 50 day simple moving average. TWTR has a gap to fill just above 34. Look for a breakout above 31.50 towards the first target near 33.50… and beyond that, gap fill. Look for the price action to heat up before Twitter’s earnings.  Note that I am long $TWTR Risk Reversals in January 2016 as well as October 30th calls. 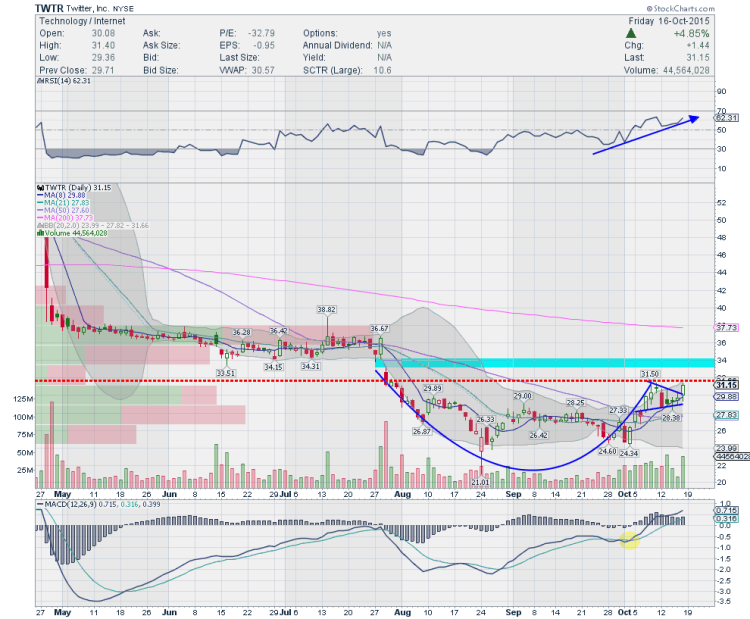 This stock has been very strong and showed Relative Strength when the market was plummeting. Since the beginning of October, the stock has run up approximately 8 dollars and now consolidated well. The stock has formed a nice bull flag. The momentum indicators are bullish. Breakout above 75.68 and the measured move is approximately 84.32.

The company reports earnings on October 22nd.  Note that I have a longer term position in $VRSN – long common collared). 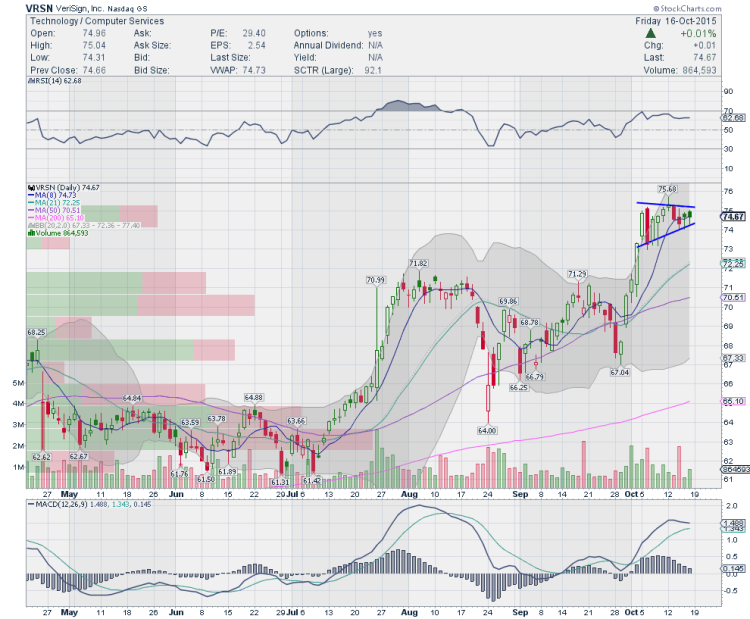 JUNO is one of the trading ideas on my radar that has begun to form a bottoming base after being beaten down. Now the stock is setting up for its next move higher. It has formed a sort of a box, with a sloppy looking bull flag in formation. There has been quite a bit of bullish momentum for the past 2 weeks. An initial move over 51.70 targets approximately 57.50-58.00. Traders probably only want to enter a long position in JUNO if it breaks and holds over 51.70.

Juno Therapeutics doesn’t report earnings until November 11th. Note that I do not have a position in JUNO but I’m thinking about a way to enter with a shorter duration options play. 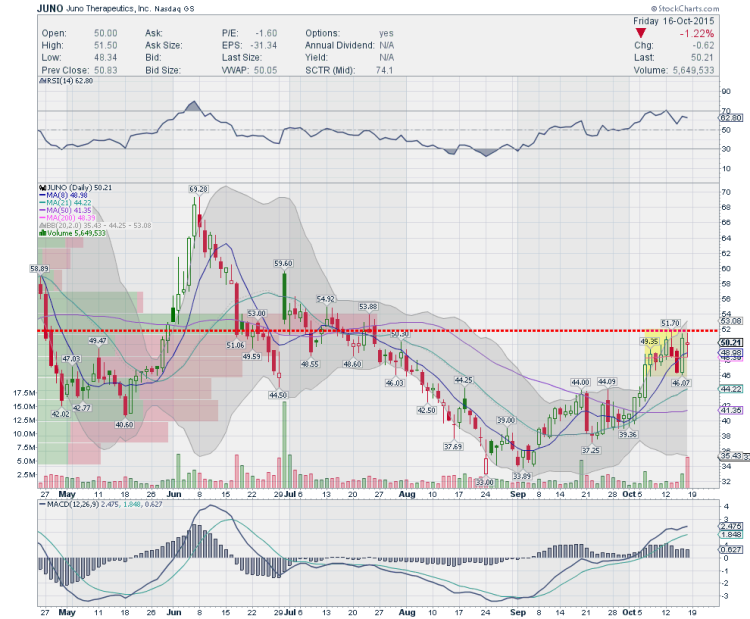 LAKE was an Ebola play in the recent past. This stock has now built a massive bull flag. While RSI is bullish (over 60), MACD crossed lower but is trying to turn back higher. The Bollinger Bands are starting to squeeze and opening towards the top. The stock has been riding the 8/21 SMA for a long time now and that is a very bullish sign. A break over 15.20 may see a measured move towards 19 (or 18.73 to be more exact). 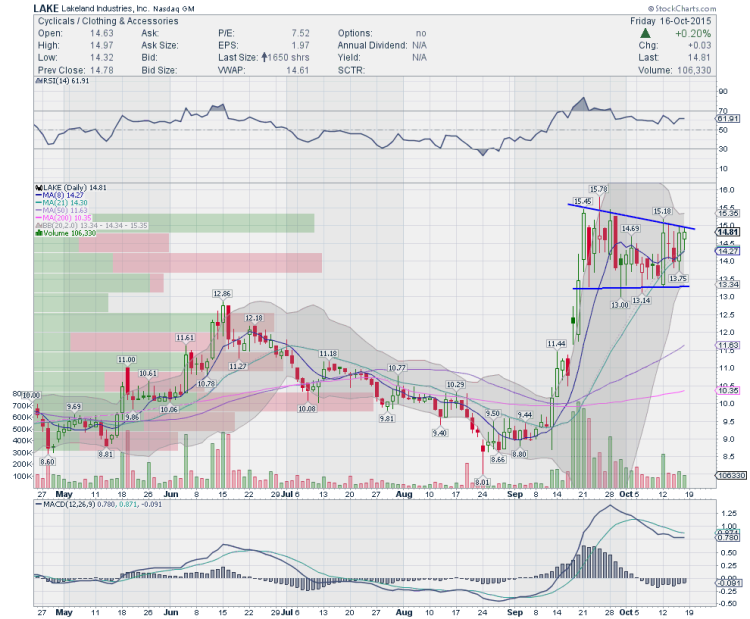 Tesoro (TSO) is one of my top 3 energy trading ideas, along with stocks Valero (VLO) and Marathon Petroleum (MPC). The stock finished last week with a strong close, breaking out of the upper trendline of the symmetrical triangle. The momentum indicators are bullish and has more room to run higher towards 109.43 then 110.12.

Tesoro reports earnings on October 28th and this should fuel more upside prior to earnings. 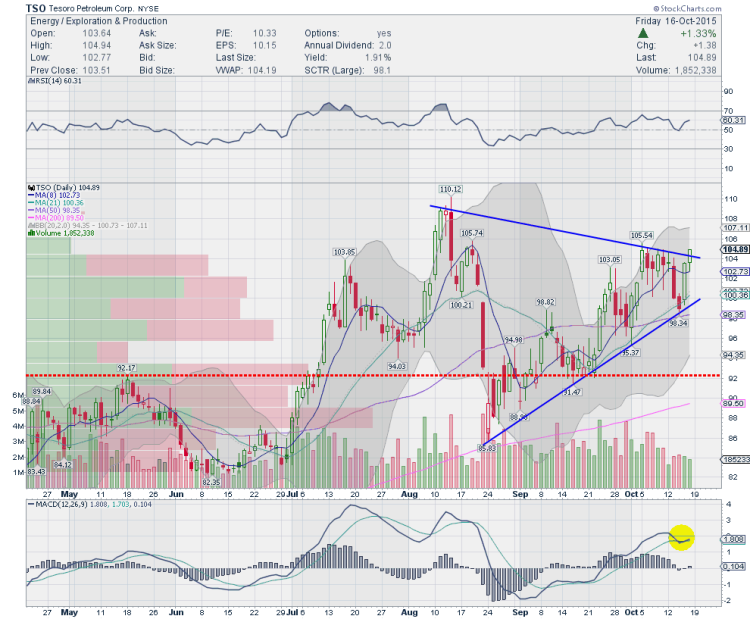 Author has positions as described above in the mentioned securities at the time of publication. Any opinions expressed herein are solely those of the author, and do not in any way represent the views or opinions of any other person or entity.