Most humans, apart from most teenagers, tend to be naturally averse to risk.  We try to avoid situations that are dangerous, embarrassing or in some way negatively compromising.  As investors, that may mean putting on hedges, rotating into more defensive sectors or raising cash reserves when risk is perceived to be higher. For corporate America, the latter has been the option of choice:  US corporations have significantly increased their corporate cash reserves since the financial crisis.


To put that amount into perspective, it is more cash than the total international reserves of Japan ($1.2 trillion) and far more than the total Eurozones savings ($221 billion).  The only country with more cash reserves stashed under the mattress is China with approximately $4 trillion.2

In fact, if we compare U.S. corporate cash reserves to those of other nations, we will see that many American firms have more cash on the ready than many capital rich countries with strong and growing economies. For instance, Apple, Inc. (AAPL) is sitting on a pile of cash reserves that dwarfs those of Canada, Germany, and even the United States. 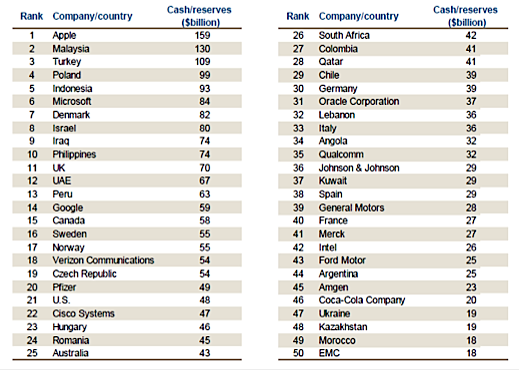 So with corporate America awash in cash reserves, how can we expect it to be deployed?  And what does that say about the future prospects of the American economy? According to Moody’s, investors should expect to see a continuation of dividend increases/payouts and healthy gains in share buybacks.  In fact, 2013 was the first time that the technology sector made the list of the top four dividend paying sectors, registering a total of $48 billion in dividend payments.  Moody’s expects dividend payments as a percent of discretionary cash flow to be about 62% in 2014, up 2% from 2013.”1  Investors can also expect to see more M&A activity and spending on new technology, plants and equipment.  With a little luck it will also lead to more hiring and increased support for the overall U.S. economic expansion.

In summary, with the recent sell off in stocks many in the traditional media are calling for an end to the current business cycle expansion and for the now 5 year old bull market to roll over.  In my opinion, this is highly unlikely given the financial health of US companies, an improving employment outlook (192k new jobs in March and an increase of 34.3 to 34.5 hour week = 700,000 jobs2), accommodating monetary policy, and overall accelerating global growth.  As a result, I am using this pull back to selectively add to core positions with particular focus on cyclical value and growth companies with attractive dividends, solid growth stories, and good balance sheets that should lead the market higher this year.  Thanks for reading.

No position in any mentioned securities at the time of publication. Any opinions expressed herein are solely those of the author, and do not in any way represent the views or opinions of his employer or any other person or entity. 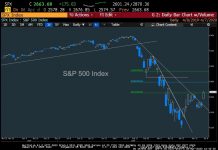