There was a great stat making the rounds last week that got A LOT of press. Did you know that going back to 1928, the S&P 500 has never been positive year-to-date after being down more than six-percent after the third-quarter?

First off, here is all the stock market data that shows no year down six-percent after the third-quarter has ever finished green. Can’t argue with it.

But here’s where you have to be very careful who you listen to and how you pay attention to data. Look at the data below… 2015 is the BEST starting point for any of the years included in the sample. That’s a nice advantage. 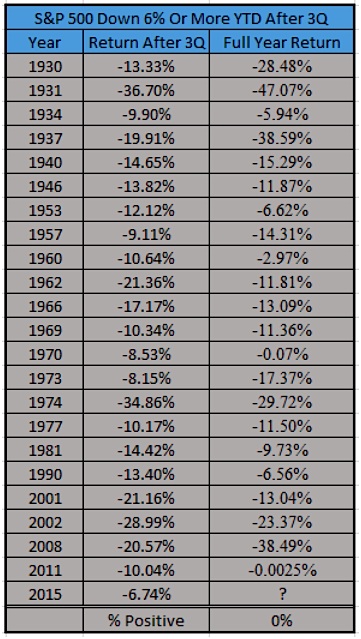 Check out the average for all those years that were down more than six-percent after the third-quarter. The average year is down nearly 16-percent! Of course it is tough to finish green, it is starting at such a major disadvantage.

I was on BNN on Friday and I laid out why I think the odds are high for a surprise fourth-quarter rally. Can the S&P 500 finish green for the year?  I sure wouldn’t rule it out.