Since going public more than 6 years ago, Tesla Motors (NASDAQ:TSLA) has been a battleground stock between the bulls and bears. The $29B electric car maker has soared an astounding 1057% since the IPO, which can largely be attributed to Elon Musk’s leadership and the potential of the electric car market and its Gigafactory. His personality and bold statements always make Tesla Motors stock a must-watch.

However, short sellers have knocked the company on delivering what they promise in terms of units and of course valuation (not expected to become profitable until 2018).

Investors must now weigh the pros and cons of the controversial $2B deal for SolarCity Corp. (NASDAQ:SCTY) On November 23rd, Morgan Stanley said in a note they see “zero value” created for Tesla shareholders based on SolarCity’s latest financial condition and weak guidance in the coming quarters. Overall Wall Street analysts remain positive on the stock with a median price target of $243.36.

It may take several years to see whether or not the combination of Musk’s companies pays off, so the direction of Tesla shares will once again turn to how the company does relative to their Model 3 sales projections.

Taking a look at the charts, we can see two prominent trends in the short and long-term. 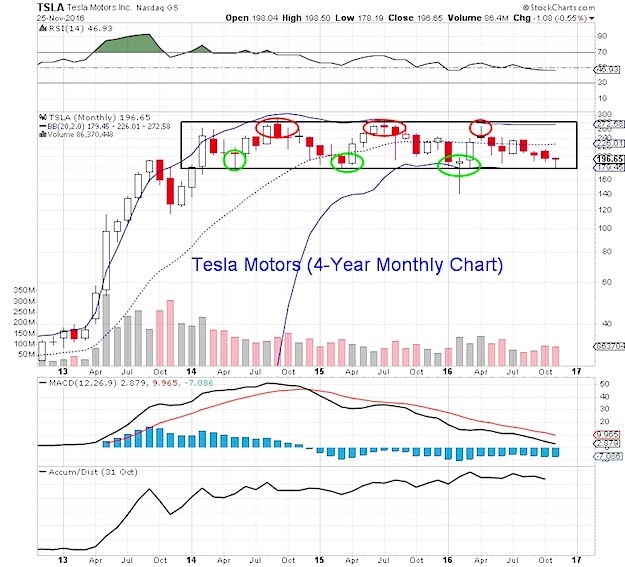 Shares of TSLA have been trading in a sideways channel since the beginning of 2014. Pullbacks to $180 have been buying opportunities on three occasions, while rallies to $280 have been to take profits. The stock price revisited the bottom of the channel this month and has experienced some accumulation, now virtually flat for November. 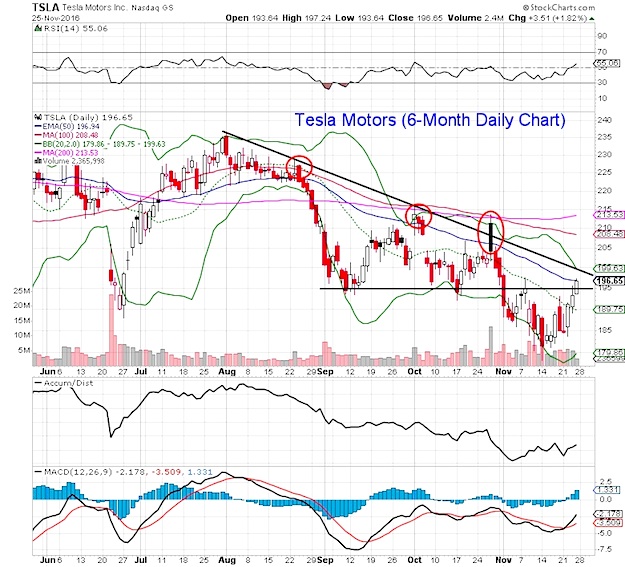 The daily chart above paints a different picture than the monthly chart. Tesla Motors has been trending lower for four months with the 50-day exponential moving average acting as the ceiling. Sentiment has started to change as shares reclaim prior resistance at the $195 level. Just above the current level is major resistance at the downtrend line and the key psychological $200 level. If shares move above $200 and can hold there for several trading sessions it sets up for similar price action noted by the monthly chart. Otherwise the stock is likely to return to the low to mid $180’s at a minimum.

Regardless of your take on the future of Tesla Motors, it is important to pay attention to the price action on multiple time frames given the volatility it has on a weekly basis. Proper risk management is vital to any trader or investor’s success, whether it be by containing a small loss from becoming a large loss or avoiding to exit for a quick gain when the longer-term thesis is still intact.

The author does not hold a position in mentioned securities at the time of publication.  Any opinions expressed herein are solely those of the author, and do not in any way represent the views or opinions of any other person or entity.

Stock Market Swings Up and Down With Stimulus News