When The Bubble Bursts…

After reaching 400 in July, the Biotech iShares Sector ETF (IBB) has been exhibiting all the technical hallmarks of a major market top. And perhaps it will soon be seen as one of the modern market bubbles that burst.

To recap, we have seen violent moves in both directions:

It is thus reasonable to wonder whether the biotech market bubble is bursting and what investors can expect from here.

The trouble, of course, is that nobody can predict the future. The only way to try to understand what may lie ahead is by studying what has happened in the past in the aftermath of other speculative market bubbles.

Therefore, it may be instructive to look at one of the most famous (as well as relatively recent market bubbles), the Dot-Com bubble, and see what parallels can be drawn and what we can learn.

The Nasdaq was doing fairly well in the 1990s mostly as a result of the information revolution and the rise of the Internet. The ascent accelerated drastically in the late 1990s.

As you can see from the chart below, from 1995 to its peak in 2000 the Nasdaq Composite index quintupled in value.

The last phase of this market bubble was notable for the many startups with no revenue but ample Internet-driven exuberance going public and instantly fetching multi-billion dollar valuations. 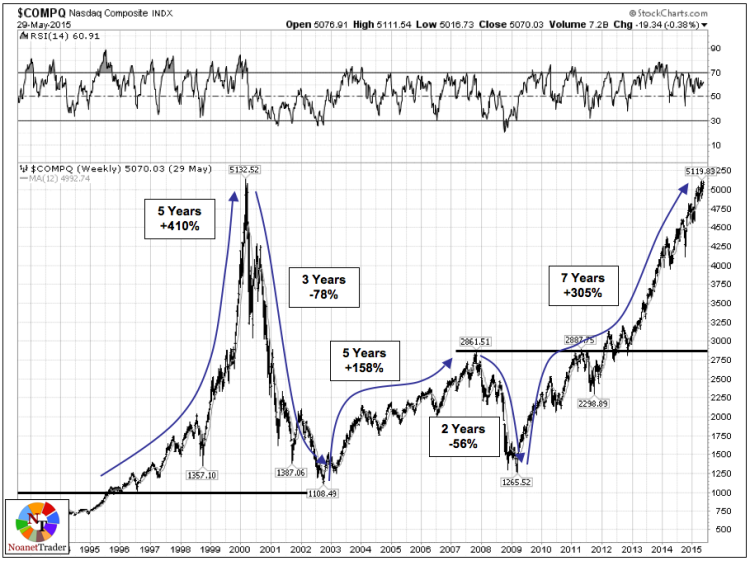 The bubble famously burst in March of 2000 and the Nasdaq then had a three-year 78% drop that basically gave back all of the gains of the previous five years. The exact retracement was around 97% but this was small consolation to any investor holding this index or any basket of Internet stocks.

During the next bull market that started in 2003, the Nasdaq rallied some +150% but only retraced about 44% of the drop from the market bubble highs. This was followed by another drop that neatly retested the 2002-2003 lows, and finally we had a seven-year recovery, which saw the Nasdaq reclaim its 2000 highs 15 years later.

continue reading about market bubbles on the next page…