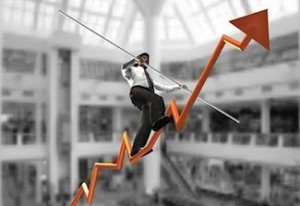 We looked at the calculation of Value at Risk (VaR) in my last article. The definition was “the possible loss a portfolio, or position, may make over a specific time period under normal market conditions, within a known confidence interval”.

A few people take exception with this definition, Taleb being one of them. In an article dating from 1997, well before the crisis, he argued that:

“I would rather hear risk managers make statements like “at such price in such security A and at such price in security B, we will be down $150,000”. They should present a list of such associated crisis scenarios without unduly attaching probabilities to the array of events, until such time as we can show a better grasp of probability of large deviations for portfolios and better confidence with our measurement of “confidence levels”. There is an internal contradiction between measuring risk (i.e. standard deviation) and using a tool with a higher standard error than that of the measure itself.”

It can be argued that history supports Taleb on this method. In Bams and Wielhouwers’ paper they present a number of points on the empirical calculation of VaR, the final one being rather compelling:

Their proposed solution, which they elaborate upon in the article, is to calculate a constant maturity value of the portfolio, “determined by evaluating the current portfolio against historical yields, exchange rates, stock prices and volatility smiles”.

For more recent thoughts on VaR, David Keohane in FTAlphaville wrote an entertaining article (subscription required) on “VaR-shock”, looking at the bond market. A VaR shock is described as “an often abused expression for a rapid and significant market correction”.

However, to come full circle on our original article, in 2012 the Financial Times had a piece on JP Morgan’s $2bn trading loss, stating that ““VaR” had come back to haunt one of its major architects.”

The article also alluded to Basel and the determination to put in place more effective quantitative measures for risk managers. VaR is still required but it is back-tested, this involves:

This is known as “Regulatory VaR” and is often accompanied by the previous “old” VaR calculation. The “enhanced treatment introduces a stressed value-at-risk (VaR) capital requirement based on a continuous 12-month period of significant financial stress”. Read more on this from BIS.

As you will expect, this is the tip of the iceberg on VaR and risk management but I hope it is a useful starting point for you. The links to external posts within the article help to round out the discussion.